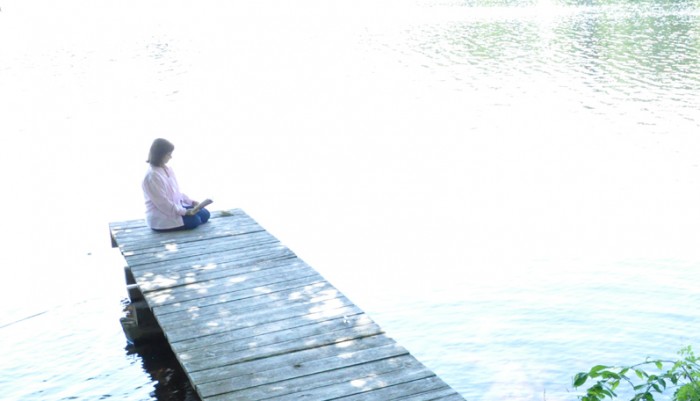 There’s nothing I like better than to curl up on a comfy chair (or the end of a dock) with a good book. I’ve been an avid reader since I was seven years old. I remember the first time my father took me to the library to get a library card. “You mean I can take any book I want?”

“Sure,” he said, “you can take up to four, but we’re just borrowing them. You have to bring them back in three weeks.”

I remember the joy I felt upon returning home to spend hours reading those four books.

By the time I was a teen, before my re-version, I devoured trashy, explicit romance novels (all available at the public library) like they were candy.

The 50 Shades books are quite popular and the movie is coming out just in time for Valentine’s Day. Women and men of all ages are devouring these books that promote illicit lifestyles, domination and abuse of women. It’s sad, really, but not surprising given our current culture of death and “anything goes” secular society.

Like anyone, I love a good story, but I especially enjoy a compelling romance or suspense novel. As I grew in my faith, I no longer wanted to read fiction with explicit sex scenes or novels that promoted abuse of women. So I began seeking out Christian fiction. However, I yearned to read good, compelling fiction with Catholic themes.

In response to this desire, I started writing my first novel, Emily’s Hope, in 2001. Not only did I want to write a compelling story, I also wanted to include information on the Theology of the Body and Natural Family Planning. If I was going to write a novel, I wanted to write one that had the potential of evangelizing. Admittedly, this book’s target audience is small (NFP teachers love it), so I decided to widen my audience, improve my writing and include the Catholic/Theology of the Body themes in a less overt way.

Since then, I’ve written four more books and each one has been on various Amazon bestseller lists. My newest novel, A Subtle Grace, just hit #1 in Christian Historical Fiction, Christian Historical Romance and Christian Romance. And my publishing company now publishes other authors’ novels.

St. John Paul II said we can “overcome evil with good.” Here is a list of contemporary Catholic novels with Theology of the Body themes that can uplift, inspire and serve as an antidote to ALL the secular, trashy novels that promote illicit lifestyles. These novels encourage virtue rather than vice, respect rather than domination and love rather than lust.

A World Such as Heaven Intended (Amanda Lauer, 2014, FQP)

Do you have a favorite Catholic novel that is uplifting and edifying? Please feel free to comment below.

One of the things you hear from people during this time of year is they “need to beat the rush.” For example, “I need to get up at 4am on ‘black Friday’ so I can get to the mall and beat the rush.”

So in keeping with that idea of needing to “beat the rush,” I’ve decided, on Christmas Eve, to write about next year, 2012, in order to beat the rush and get a leg up on all the other bloggers out there.

Okay, that’s not really why I’m writing about the new year before we even have celebrated The Solemnity of the Nativity of the Lord.  I know most Catholic bloggers have focused their writings on the coming of the Messiah, or the meekness of the King of Glory as he lay in the manger; their pieces are timely, powerful, and excellent for reflection and guiding prayer.  But I am looking ahead.  I really want us to be taking those familiar Christmas themes and carrying them forward beyond the Christmas liturgy and into the new year.  I want us to find the spirituality associated with Christmas and recognize that it is not just for the month of December, but for everyday.

I know, I know.  I can imagine the collective groan as people start moving their cursors to the red “X” in the upper right hand corner of the screen.  Most people believe that when Catholics start talking about “spirituality,” orthodoxy gets thrown out the window.  I get it.  I’ve seen plenty of that material too.  However, I can assure you, this is not that kind of post and if you indulge me for a few more minutes, I’ll prove it.

One of my sons, Noah, is seven years old and he has been going crazy for the past two weeks, waiting for Christmas.  In fact, one of the traditions in our home is to buy everyone a new pair of Christmas pajamas to wear to bed on Christmas eve and on Christmas morning.  This year, Noah’s expectation is running so high, that he has been wearing them for the past two days; as in, he hasn’t worn anything else!  I can already see the debate we’ll have later when it’s time to go to Mass.  But, I digress…

This expectation is an important part of Christmas, not only for children, but for adults too.  Indeed, Advent is a season dedicated to expectation.  Consider these snippets taken from the Advent Gospel readings:

We can see the Lord’s coming is unexpected, but anticipated.  We don’t know when it will occur, but nonetheless we are exhorted to, “Watch!”  We see John’s testimony about the Lord in the next two weeks.  It not only highlights the coming of Jesus, but serves as foreshadowing of our efforts to evangelize, always pointing to the “one mightier than ourselves.”  And finally in Gabriel’s message to Mary, the Kingdom which Jesus shall rule over will have “no end.”

The expectant message of Advent is not only in anticipation of the Lord’s coming as a baby, the celebration of a historical event, but also serves celebration of a future event when the King of all the Ages comes at the end of history (cf. CCC 526, CCC 1042).  Therefore, the first (i.e. Christ’s incarnation) should influence our spirituality as we journey towards the second (i.e. Christ’s second coming).  But what should our spirituality look like as we anxiously await a world that is not here yet?

Almost exactly forty years ago, in October 1971, John Lennon released the song, “Imagine.”  In it, the former Beatle sang, “Imagine there’s no heaven; it’s easy if you try.”  Coincidentally, for the past forty years people have been living as if there is no heaven; they are not anticipating the return of the King of Heaven.  It would seem the pervasive idea of no heaven and hell, articulated in John Lennon’s famous song, resonates more with modern man than Catholicism’s call for people to lead lives of holiness and charity.

There may be good reason for that.  The rise of religious fundamentalism and fanaticism in the past half century, both  inside and outside of Christianity, has paved the way for a popular (and profitable) backlash against religion in general and Christianity in particular.  Books by Richard Dawkins (The God Delusion) and recently deceased Christopher Hitchens (God is not Great) fly off the shelves in great quantities, demonstrating the popularity of the idea that there is no heaven and no hell.

If you survey the “religion” section of your local bookstore, I believe you are likely to see, in addition to books by Dawkins and Hitchens, books written to direct people to a new kind of spirituality apart from religion, or books dressed up as orthodox (i.e. Richard McBrien) that really get many of the facts wrong.  Interestingly, there is no shortage of this type of material being distributed.  From these facts, I can only assume there is a great interest in religion/spirituality, there is a thirst for God, but there is a lot of aggression and ignorance too.  Unfortunately, people like Dawkins and McBrien seem to have the lead in telling the story – our story!

In order for Christianity to grow and truly become the life changing force it is in 2012 (and beyond), it must be something more than just “spirituality.”  The life of the Christian must be, as the former Master General of the Dominican Order, Fr. Timothy Radcliffe, OP, once said, “moral, reflective, prayerful, and imaginative.”  The Christian life, truly understood and lived, would be a synthesis of these four items.   We must use our imagination to combine ethics (i.e. morality), theology (i.e. reflection), and spirituality (i.e. prayer) into our daily lives.  If these items exist apart from one another the result is never good, even sometimes tragic.  For,

The challenge for our spiritual lives in 2012 is to bring together all these aspects.  Advent and the season of Christmas, with all its expectation, awe and wonder should inspire to dive deeper into our faith.  As we contemplate the awesomeness of God becoming man, being born in a state of lowliness, and the worshiping Magi during this season, we should be renewed in our desire to pray more, study more, and live virtuously.

I will be publishing a follow-up to this article in a few days.  Right now, I have to go begin to get my seven year old out of his PJ’s and ready for Mass!  Have a blessed Christmas!

When I’m talking with older kids about morality, I try to emphasize the difference between the Commandments and the Beatitudes.

I observed a terrific lesson about this in a class at St. Joseph’s High School in Greenville, SC, several years ago – I just wish I could remember what texts they were using. I think maybe the Dominican Series from Priory Press. Anyway, the teacher explained to the class that the Ten Commandments are the “moral floor” that we have to stay above, while the Beatitudes are like the “moral ceiling” we should try to reach.

That's quite a ceiling

I talk about this in terms of marriage – if I really love my husband, how am I going to nurture our relationship? What does it take to live out my vocation?

Well, to start with, I’m not going to cheat on him, steal from him, lie about him, be jealous of him – lots of “shalt nots” included in the Recommended Daily Allowance for our marriage. But that’s not what makes a good marriage – just the absence of doing bad things to my husband. Same with being a mom – although I certainly have days when “kept children alive” is all that’s crossed off on my checklist. I really show my love through the things I do that go above and beyond not-sinning-against-them. That’s what the Beatitudes are akin to – how we really grow in holiness; how we really cultivate a relationship with God.

I find that kids just “get it” if I keep coming back to this idea. Plus, it gives me the chance to talk realistically about marriage as a vocation, which I think kids need to hear about; so many of them either feel like marriage is BS because they’ve seen so many marriages fall apart, or have this very unrealistic “marriage is for soulmates” idea that real love means never having to suffer because you’re so happy all the time.