The Patron Saint of Amazing Catechists is Servant of God, Sister Marie de Mandat-Grancey (1857-1915).  Sister Marie was a French noblewoman who gave up everything to serve the poor as a Vincentian Daughter of Charity. She was a nurse and the Superior at a French naval hospital in Turkey, and always had a deep devotion to the Blessed Mother and a passionate ministry in catechesis and education. Sister Marie is best known for her discovery of Mary’s House in Ephesus, Turkey, which is believed to be the Blessed Virgin’s final home and the location of her Assumption. It is now a place of Pilgrimage for over two million Christians and Muslims, annually.  The following is from Zenit News Agency (2006):

On July 29, 1891, two Vincentian priests, French Fathers Henry Jung and Eugène Poulin, gave in to the insistent requests of Sister Marie de Mandat-Grancey, superior of the Daughters of Charity who worked in the French hospital of Izmir. The priests set out to look for Mary’s house, having as their compass the vision of German mystic Blessed Anna Katharina Emmerick (1774-1824).

From her bed in a village of Westphalia, where she spent the last 12 years of her life, the mystic received visions of the life of Jesus and Mary. These visions were recorded and published after her death by German writer Clemens Brentano.

The two priests, former soldiers of the French army, climbed the Bulbul Dag (“nightingale’s hill” in Turkish), which rises above the Ephesus plain.

After much effort, they found the ruins of a house near a fountain, a few kilometers from Ephesus. The house seemed to have been used as a chapel — which fit perfectly with Emmerick’s description.

It was the “Panaya uc Kapoulou Monastiri,” as the Orthodox Christians of the area called it — the “Monastery of the Three Doors of Panaya, the All Holy,” given the three arches of the facade. These Greek Christians used to go to the site on pilgrimage during the octave of the feast of Mary’s Dormition, Aug. 15.

The Vincentian priests did some research among the residents of the area and confirmed the existence of a centuries-old devotion which recognized in the ruined chapel the place of the last residence of “Meryem Anas,” Mother Mary.

Archaeological studies carried out in 1898 and 1899 brought to light among the ruins the remains of a first-century house, as well as the ruins of a small village that was established around the house since the seventh century.

Pope Leo XIII (1878-1903) was positive about these findings and re-established in the Ordo Romanus a note that on the feast of the Assumption mentioned Ephesus as the probable place of the Blessed Virgin’s dormition.

The Meryem Ana shrine, in front of which Benedict XVI celebrated Mass in 2006, was restored in the 1950s. Pastoral care of the site has been entrusted to the Capuchin friars.

It is the object of Muslim pilgrimages too, as Mary is presented in the Koran as “the only woman who has not been touched by the devil.” 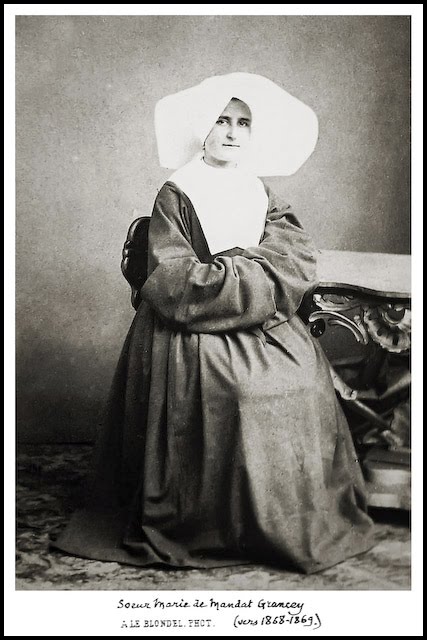 (All donations towards the Cause for Sr. Marie gratefully accepted at this address.)