About eighteen months ago I took an online class called Digital Discipleship Boot camp or DDBC.  I wrote about it at New Evangelizers.  Now I am a presenter and coach with the program and would like to encourage you to look into the course and participate in it.  Though I was fairly savvy about social media and how to use it before the course, I enjoyed the class as it exposed me to uses of technology and new forms of media I was not familiar with or in some cases even aware existed.

If we are to be a part of the New Evangelization we need to use the tools of the time.  Certainly most of us would agree technology is a tool of our time.  While I do not want to see technology take the place of person to person interaction, it certainly can assist us in reaching those we catechize.  In particular, using technology to reach children and youth, as they are the generation which has grown up with electronic media and technology in unprecedented ways, is most important.

Digital Discipleship Boot Camp is an online program using a combination of live interaction, mentoring, coaching and personal assignments for people at any and all comfort levels in regard to technology.  The topics addressed range from social media, websites and digital storytelling to the International Society for Technology in Education Standards and website copyright rules.

If you are a teacher, catechist, or a religious education director, or you work or volunteer in a parish in any capacity, this course is for you.  I am not exaggerating when I say that anyone who is involved in parish ministry and uses a computer can benefit from this program.  A new group is starting in February and you can find more information at Digital Discipleship, Lifelong Learners in the New Media Age.  You can also learn more about Sr. Caroline Cerveny, who runs the program and is so enthusiastic about being a digital disciple!

If you have any questions, please ask in the comment box or email me at faithformation(at)stedwardpb(dot)com.

Webinars are an increasingly popular tool for spreading the word about a company or product. But are they the right tool for spreading the Word of God? They certainly can be. The key is to turn a webinar into an online retreat by creating a spiritual atmosphere that reminds people that where two or three are gathered together in Christ’s name, he is there in the midst of them. 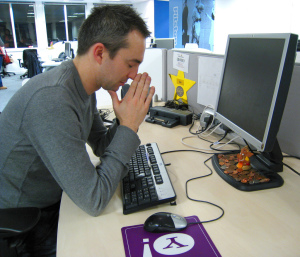 A webinar, for those who don’t already know, is a seminar or workshop offered via the computer. People can attend live, in real-time, or they can watch the recorded session later at their convenience. Presenters need web-conferencing software and a webcam, but participants don’t need any specialist equipment — only a computer and a high-speed Internet connection.

In the simplest type of webinars, participants watch PowerPoint slides on the computer screen and listen to an audio-only version of the speaker’s talk. (Watch an example here.) But webinar technology also offers exciting features to enhance the interactive experience, like live video of the speaker throughout the presentation, and interactive polls and chatboxes for question and answer sessions. (Watch how I used these interactive features here.)

The Good, the Bad, and the Ugly

Webinars, like any teaching tool, have benefits and drawbacks. The main benefits of hosting a webinar rather than a live, in-person event are:

Drawbacks of webinars include:

How to Create a Spiritual Atmosphere

In using a webinar for religious education, we need to keep the focus on Jesus. Otherwise, it can be a distant, clinical, and downright boring experience. So, without further ado, my top three tips for turning a webinar into an online retreat.

Remind people to invite Jesus into their hearts and stay close to him and his inspirations during this time. Even when we are physically apart from Our Lord in the Blessed Sacrament, we can express our longing for him in a prayer of spiritual communion like the one I used to start my online marriage enrichment retreat: 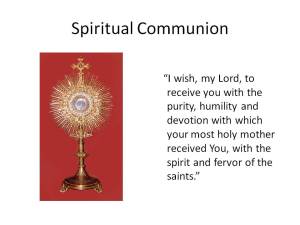 Great artists throughout the centuries have turned to the Bible for inspiration. Practically all of Scripture is depicted in painting and sculpture with timeless elegance and nearly universal appeal. Best of all, you can use religious artwork that is more than 100 years old with very little fear of infringing someone’s copyright. For one of the illustrations in my online marriage enrichment retreat, I selected this dramatic portrayal of the Return of the Prodigal Son, available from Wikimedia Commons. A notice from Wikimedia explained: “This is a faithful photographic reproduction of a two-dimensional, public domain work of art. … Its copyright has expired.” 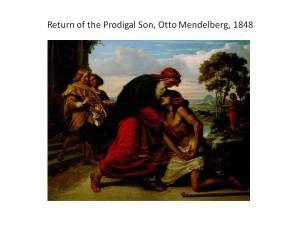 An in-person retreat usually offers time for meditation and personal prayer to consider deeply the topic of the retreat and to ask what action God might be calling us to take. An online retreat can offer the same. After each PowerPoint presentation in my online retreat, participants were invited to take ten or fifteen minutes to think and pray about the questions for discussion and type their answers into chatboxes online. During the meditation period, we piped in Gregorian chant from youtube. You can find many great clips of sacred music on Youtube. Some clips, like the one below, last for an hour or more, so you don’t have to worry about splicing more than one clip together.

Go Forth and Evangelize!

So, go ahead and consider incorporating webinars into your ministry, if you haven’t already. This amazing technology is a great tool to advance the New Evangelization and spread the Gospel to the four corners of the earth. And if you use this technology already, we’d love to hear about it in the comments.

Not every engaged couple has a traditional work schedule or even lives on the same continent before getting married, so in-person marriage preparation isn’t always possible. Enter the age of Skype, where videoconferencing technology can make engaged couples feel as if they are sitting in a pre-Cana teacher’s living room even when each person is actually thousands of miles away.

Peter McFadden of Creative Marriages Inc. in New York City offers an online option for couples in difficult logistical situations. Through this program, Peter has taught actors on location in Australia and soldiers about to be deployed to Afghanistan. He has even given online marriage preparation to two Yosemite park rangers who were working almost round-the-clock hours far away from the nearest Catholic parish. “A park ranger’s not a 9 to 5 job,” Peter remarked. Neither are a lot of other careers, which is why it’s good to have an online option available.

The online sessions are more than just videoconferences with three people speaking face to face via computer screens. Peter’s system allows him to share photographs, Power Point presentations, and even short videos on the couple’s computer screens during the session.

To make sure the shortened program delivers the necessary practical and theological content, Peter asks the online students to do some work on their own beforehand. A few weeks in advance, couples fill out the FOCCUS questionnaire, which identifies areas of agreement or disagreement on issues like communication styles, parenting, and sexuality. Couples are also asked to read a few short essays summarizing talks that Peter gives in his small-group sessions. “99% of people do the homework,” Peter reported, and many also talk to each other about the FOCCUS questions and the readings before meeting him online.

The main difference between the Creative Marriages online program and the in-person program is thus not the content but the method. “There’s more small talk when you meet in person,” explained Peter. “The Net does promote more of a ‘let’s get down to business’ atmosphere.” In addition, Peter has found it easier to mediate fights when he sees couples in person. “Believe it or not, some couples will fight” during marriage preparation instruction, and it’s easier to see the danger signals expressed in body language when the participants aren’t sitting in front of a video camera, he stated.

Only about 10% of Peter’s students take advantage of the online option. Most of the other students meet in small groups at the Church of Our Saviour on Park Avenue in Manhattan, where my husband and I began teaching the pre-Cana curriculum we developed many years ago.

Because of a strong preference for in-person instruction, the Archdiocese of New York requires that couples who want to take online pre-Cana receive special permission from the Family Life Office. “Technology is a gift,” acknowledged Marga Regina, Marriage Preparation Coordinator for the Archdiocese, “but we can’t use it to alienate us from the community.”

Most people who ask to take online pre-Cana are already disconnected from the Church community, Marga noted. “They say they can’t make the time, but then many find out they can, and they love” taking pre-Cana in-person, she added. Catechists have to remember that they are teaching souls who ideally should be learning in community with an opportunity for confession “in a real church with a real tabernacle,” she stressed.

For couples who do have a legitimate scheduling problem, not just reluctance to make the time, Marga will recommend them either to Peter or to CatholicMarriagePrep.com. Catholic Marriage Prep gives couples a series of worksheets to download and complete, then instructors review the worksheets and offer personalized instruction and advice.

Peter echoes the Archdiocese’s preference for in-person rather than online pre-Cana programs. “I understand why people would be concerned about online education. There’s a right way to do it, and there’s a wrong way to do it,” noted Peter. Some types of online education have little or no real interaction with the students, and there’s a danger that students will take the program without paying full attention. An automated program with a pre-recorded voice and computer-generated alerts and quizzes would not fully implement the Church’s goal to prepare couples for the sacred and sacramental aspects of marriage, he cautioned.

Peter’s video-conferencing style of online pre-Cana instruction is full of personal interaction, but it only reaches one couple at a time. “The problem is that it’s not scalable, it’s not a solution for reaching out to 100,000 couples a year,” Peter explained. But if your focus is forming souls and not increasing the bottom line, maximizing personal interaction is the only way to go, online or off.