Two years ago a young guy walked into my office and marched up to my desk with a face that tried to be serious but failed. A grin hovered at the corners of his face. He made a request to receive the sacraments of the church and confirm in the Catholic faith. I didn’t know him from Adam. I only recognized him from assisting at Mass with our youth group every weekend. I didn’t know who he was or even that he had never received all the sacraments (he was so faithfully at Mass every Sunday) but there he was, with a big request. Within two years I came to know who this young teenager was. He was one of God’s chosen ones. 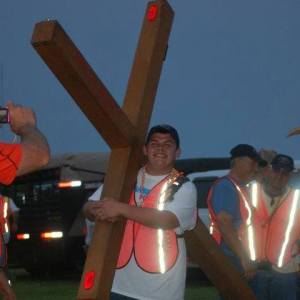 Cody always told me that God had big plans for him…or, let me get that right…that he (Cody) had big plans for God. I don’t know if Cody even realized how immense those plans were or how many people can testify today how well Cody accomplished them in such a short amount of time. Last night, Cody’s mission was to go back to his heavenly Father. I’ve never written or shared about a student online. As directors, youth ministers, and catechists of religious education we see children come and go, grow and leave our church programs. It’s a maze of energy found in church only after school on Wednesday evenings. Various impressions are made. We meet with parents and grandparents. We get to know siblings. Many times the younger people in the hallway blur together into a lot of paperwork and names on roll call sheets.

Our “jobs” in religious ed are never about paper work and the litany of names that comes with it. A fellow catechist told me my first year to never forget that we were in the “business of dealing with souls.” I have never forgotten. Cody’s death reminds me, utterly anew, what a tremendous opportunity we have to work this ministry and how truly necessary it is to remember this while serving them. It’s about souls and hearts. Lots of them. Cody reminded me of this every time he walked into our building. He stood out because he was Cody. Cody met everyone with a ready smile, a helping hand, a kind wave, and bear-size hugs. He stood out because he made each and every person feel as though they stood out too. That’s who he was. 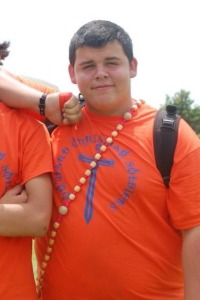 He was one of those kids that adults never forget. He didn’t always have a ride to mass or class but he always found one…or walked himself there. He always rallied the others. Always. He was one of those kids who accepted everyone as they were and was ever welcoming. Even if someone hurt him, you wouldn’t have known he thought any less of that person. He would have come up right alongside that person and helped them finish the race anyway. That was Cody. He was everyone’s friend, everyone’s best friend. Ever welcoming… 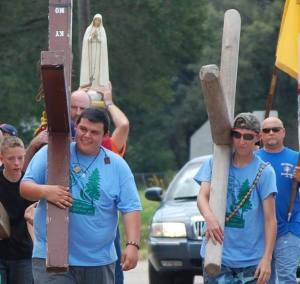 From what I knew, his Catholic grandmother was his connection to the Church. Something in her had inspired Cody to search for God there. That’s where he came into contact with church sponsors who, in turn, supported him, guided him, and led him to the CCD office to learn more about the faith and to receive the sacraments. No one brought him to church or religious education classes. Cody brought himself. He desired to know, love, and serve God that much.

Cody loved his faith more than anything and strove daily to be a better Christian than the day before. The car accident happened while on his way to a church youth function in the town he had moved to.

Cody never took for granted that he nor anyone else had to get to heaven on their own. He knew it was his mission, the mission of us all, to help someone on their journey. Often we seek to find fault with the church because we want to shoot the arrow of blame onto someone else whose job it is to instruct the faithful when, in fact, the real blame lies within ourselves. Each one of us is responsible. Cody knew that. How do we handle these people…young and old…when they walk through our office doors and into our classrooms with a serious request yet lacking the ground work that others have?

There were 10 lepers. Only one returned and gave thanks.

Those of us who knew him (even if it was for only one night a week for two years inside the aging walls of a religious education building) are the ones who were blessed, healed, and anointed beyond measure. Cody taught us far more than we taught him.

Cody truly believed that God had great things in store for him. He took the path to God very seriously. He led the way. He rallied the weak and the nervous. He was never loud or arrogant. Cody always wanted to be side-by-side with his friends and fellow Christians. Never ahead of them. Cody would have lagged to the back of the line had it meant helping someone else catch-up; or waiting for someone to catch up. But God wanted Cody to lead the way this time. I kind of wonder what Cody’s opinion is of that.

I can see him cocking his ahead slightly to the side and saying, “Aw, Ms. Cay, God just needed me up here.” There wouldn’t have been any other explanation. He just knew what was needed and he became that. All that. He was a rare soul. He gave back far more than he received. He always seemed to know that was his calling.

Today after Mass, the youth group stayed in church to pray a rosary for Cody and his grieving family. Our city’s fire chief stood up and spoke briefly to everyone there. He reminded us of the person Cody had been to all of us and how we, as people in the family of God, had all done our job in guiding Cody to where God wanted him to be today.  And now Cody is at the end of that journey towards God, the journey we are all traveling day by day, week by week, year by year.

Cody is right where God wants him.

Are we where God wants us to be?

Are we answering the call?

Are we joyful in working this vineyard?

Are we diligent in this business of dealing with these souls?

More than anything else, Cody wanted to see the face of his Savoir.

Most of us are still plowing…apologizing…treading…fussing…staggering…muddling…racing…crawling down that path towards that end. 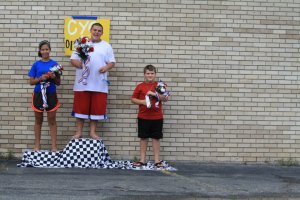 I’m still going to miss that boy. And I’m going to think of him every time a soul walks in my office and asks to learn more about this vineyard that Cody loved so very much.

{Please keep Cody and his family in your prayers during this sacred time. Thank you!}

Cay Gibson lives with her husband, Mark, and their five children in Southwest Louisiana and serves her church parish as the Director of Religious Education. She is the author of "Catholic Mosaic" and "A Picture Perfect Childhood" and blogs at Cajun Cottage Under the Oaks.