We do not have games or crafts or movies or parties of any kind in Wednesday Sunday School. All classtime is…classtime. Whatta concept. These children will be graduating from highschool in 6 more years; babydays are slap out the window. But during the Christmas class the kids can eat snacks and drink pop; that’s called an unparty. I lose about 10 minutes of productive time to unparty inefficiency, but even Scrooge let Bob Cratchit take the afternoon off on Christmas Day. And most of the class material is Christmas-related, and they are good kids, and well…I’m weak.

“Hey, it’s almost Christmas; what season is it?  Winter?  Not yet.  Fall?  No, I mean what Church season?  Advent.  Yes, which means Arrival.  I was thinking this week about the first Advent, when Mary was waddling around [I do so] with a huge stomach, saying, “Joseph, I am so ready to have this baby.”  I always considered Advent being a time of expectation, like “O come, O come, Em-ma-a-an-u-el,” but never really thought about Mary being tired of waiting and wanting to get it done. That’s how my wife and daughter-in-law are; I think all mothers have their own personal Advent season every time they are pregnant.

Y’all remember last class we were talking about Mary, and the Immaculate Conception came up? Yes.  It’s related to Baby Jesus and Christmas.  Which reminds me I didn’t see any of you at Mass last Wednesday, but I know you young’uns can’t drive yourselves to church.  Anyway, let’s think about the Immaculate Conception a bit.  Who was immaculately conceived?  Jesus!  Well, yes, he was.  Let me ask it this way: who is honored by the feast of the Immaculate Conception?  Mary.  Yes.  It’s not about when Jesus was conceived without sin, but about…when Mary was conceived without sin.  Yes.  It’s about Mary growing in her momma, not Jesus growing in Mary.  OK, let’s review some [on the board goes the Ark of the Covenant & pregnant Mary to the right]: here’s the Ark of the Old Covenant and …the Ark of the New Covenant.  Yes. The old Ark contains God’s stuff; the New Ark contains…God!  Yes.  What’s more precious and holy: God’s stuff, or God Himself? God Himself.  Yes. Now let’s look at the Old Ark for a second.  It wasn’t just some old box the Israelites kept pots in. It was made of expensive wood and the inside was lined with gold.  It was the finest, purest, most precious container they could make.  And how did they move the Ark around?  They carried it on poles.  Yes, so they wouldn’t touch it.  Why would they not want to touch the Ark?  Cause it was important?  Yeah, sort of.  People felt unworthy to touch the Ark because of their sins; the Ark was set apart from sinful things.  Y’all know the nuns we have in our parish?  Yes.  Well, suppose some young man thought one of them was cute, and asked her to go on a date, go out dancing.  That’d be weird!  Yes, why…she’s not married.  Nuns don’t do that after they’re nuns!  Right, they are set apart, like the Ark.  They’re reserved for God by their own choice.  And Mary freely chose to be set apart, too, and be the Mother of God.

Now, the Ark never contained anything but the jar of manna, Aaron’s staff, and the Commandments. Can you imagine if the Ark was empty, and I came along and wanted to store my shoes in it? That’d be wrong!  Suppose they were brand-new shoes?  No!  Suppose they were golden shoes?  Umm…no! Why not?  Cause it’s for God’s stuff, not regular stuff.  Right.  The Ark is permanently set apart for God’s stuff.  Now here’s Mary, the…New Ark!   Yes.  What’s in her?  Jesus. Yes, who is…God.  Yes.  Now we know that God is more valuable than his Stuff.  nd we know how much respect the Israelites had for the Ark.  So how much respect might we have for Mary?  More!  Yes, way more.  Now was that stuff in the Ark perfect?  Perfect?  Yeah…would you expect anyone to worship the pot of manna?  I don’t think so.  Me neither…even if it’s God’s Stuff it’s still just stuff.  Was the stuff in Mary perfect?  It wasn’t stuff, it was Jesus!  Right, who is perfect.  So do we worship what was in the New Ark?  Yes.  So which Ark should get more respect?  The New one!   Yes.

Now tell me, are we born in sin? Yes.  Why?  Cause Adam and Eve sinned!  Yes, we inherit that original sin from our parents…what’s it called?  Umm…Original Sin?  Yes.  I thought I’d trick you on that, y’all’re too smart.  Do our parents create us? Yes?  Yes, with God’s help.  We inherit sin though our parents because we’re made from them.  Tell me, who was Jesus’ Father?  God the Father?  Yes. Does he have a body?  No.  Is God a sinner?  Well, isn’t God perfect?  Yes, just checking.  And Jesus’ mom?  Mary!  Who had…a…body’n’soul!   Yes. So if she was sinful…Jesus would get it from her?   Yes.

OK what’s this? [I pull up my shirt enough to see my belly-button]  Ha, that’s your belly-button! Uh-huh…what’s it for?  Nothing.  Well, what was it for before I was born?  It was the thing….the umbilical cord!  Yes, like so.  [I draw a fetal Jesus and connect it to Mary’s tummy with an umbilical cord] Let’s imagine I’m baby Jesus.  Do I breathe while I’m in Mary?  No.  Do I eat?  No.  Drink?  No.  Right.  Everything I get comes from Mary.  We are as close to being one thing as you can get.  Mary breathes, eats, & drinks for both of us, and she shares all that with me while I’m growing inside her, just like all mothers do.  Now imagine perfect baby Jesus so completely joined to his mom…how could that work if she were a sinner like me?  That’d be weird.  Yes; we’re made of a…body’n’soul!  Yes, so if our souls are messed up by sin…our bodies are too.  Yes.  And if Mary’s soul was stained by sin…her body was too.  Yes.  And she would not have been a very good Ark for Jesus.  Imagine I’m a good Israelite back when they were making that beautiful Ark.  I come up with a nice box.  I say, hey y’all don’t need to make a special box, my new washing machine came in this one, it’s very sturdy. They didn’t have washing machines!  Pretend they did!  What would they say?  They’d say no!  Right, a regular container won’t do for holding something special.  And remember, Jesus floating in Mary’s tummy was much closer to her than the jar of manna was to the Old Ark, just sitting there for centuries.  If Mary was sinful, body’n’soul, how would Jesus get oxygen and nutrition from her without also getting sin?  He couldn’t.  Right.  That’s why the Church teaches that Mary was conceived in her mom without sin, and never sinned, so she’d be a good Ark for God to live in for 9 months.  And look, one last thing.  [I put a dot on Mary’s tummy]  This is Mary’s egg, the one that’s going to become Jesus.  If she’s a sinner, body’n’soul, then…the egg has sin in it?  Yes, it’s part of her body.  So how are you gonna get that sin out before Jesus is conceived?  Well, God could do it.  Yes, but what’s better: to take a sinful egg and clean it off before Jesus’ conception, or just have it always have been clean from the get-go?  From the get-go!  Right.  So those are the two main ways I think about Mary being sinless from the first moment she existed in her momma: Mary’s sinless tummy for God to grow in, and a sinless bit of her to make Jesus from.

Now, we know Mary’s the New Ark.  But There’s Something Else About Mary…do y’all get that?  Get what?  Never mind.  [I draw a sad Eve beside Mary]  Who is this sad woman?  She’s in the Bible. Elizabeth?  Ooh, good guess, but no.  Mary?  No…she’s maybe the saddest woman in the whole universe…look, she’s wearing some kind of animal skin…Eve!  Yes, it’s Eve.  Eve feels terrible because when the devil tempted her with the apple, she could’ve said no, right? Yes!   ‘Cause she had…free will!  Yes.  But she said yeah, sure, ok I guess; ate the apple and then got her dimwit husband to have a bite, too.  So now we’re all miserable living in a sinful world.  Anyway, I saw a terrific picture a couple of days ago… I need a Mary!  No, I used you last week!  You daughter, get up here.  And an Eve, yes, c’mon.  Y’all face each other.  OK, Mary you are way pregnant…put your left hand in your hoodie pocket, poke it out so we can see that baby…good.  Now Eve, you look sad because…I ate the apple.  Yes, and wouldn’t you love to be able to fix that?  Yes.  Now Mary, take Eve’s hand…and put it on your tummy so Eve can feel your baby…who…is…Jesus!  Yes.  Class, would this make Eve feel better, to know Jesus is going to be born? Yes.  Why?  ‘Cause Jesus will fix our sins?  Umm, sort of; Jesus will undo the damage of that first sin in the Garden.  Eve, are you feeling better?  Yes. OK, remember Mary is the New Ark; we also call her…?  No guesses.  Who’s this?  Eve.  What Testament is she in?  The Old Testament.  Yes, and Mary is in..theNewTestamentMaryistheNewEve!   Mega-genius, yes!  Mary is called the New Eve.  Eve, what bad thing did you freely agree to do? Eat the apple!  Yes; and Mary, what good thing did you freely agree to do?  Have Jesus?  Yes.  Mary & Eve, sit down.  Through Eve we got a mess; through Mary…the mess got fixed!  Yes.  Trick question: could Mary have chosen not to have Jesus?  No, she had to.  Why?  So He could die and all.  So Mary didn’t have any free will?  God forced her?  No, but if she said no then Jesus wouldn’t have been born. Right.  That’s scary to imagine.  But God did leave it up to Mary, just like he left it up to Eve.  This shows how much God loves us: he leaves us free to make incredibly important choices that don’t just affect us, but the whole world, the whole universe, even.”

Readers, here is the image the girls portrayed: 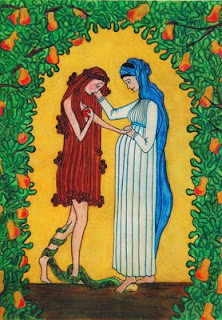 I may bring it to our next class and discuss the serpent. And here is the winsome backstory: The Anchoress