Let’s jump right in: I read Die Weise von Liebe und Tod des Cornets Christoph Rilke for the first time in 1982. Here’s that backstory, but you don’t have to look at it. All you need to know is that it’s a prose poem in German, and an elegant introduction to the language.

So much of who I think More is comes from this painting. And the same is true for Holbein’s portrait of Henry VIII. And Erasmus. And Anne of Cleves. So I started aimlessly browsing all the Holbeins I could find, because you can often see a lot just by looking. By and by I came across this one:

It’s called the Darmstadt Madonna. It follows a standard formula in which the patron (in this case, Jakob Meyer, mayor of Basel, Switzerland) is at the right hand of Jesus, the Trinity, or a saint; and other members of the family, both dead and alive, are distributed starting at the central character’s left hand. Notice in this case that although Mary is physically dominant, nobody looks at her: the patron focuses his gaze on baby Jesus, as does Mary herself. That’s a little Catholic digression about a content-packed painting which is not the subject of this post.

But what struck me is Mary’s cloak resting on Jakob’s shoulder…a type of overshadowing I hadn’t ever noticed before. Mary is protecting Jakob by ‘spreading her wing’ over him, recalling numerous Bible and liturgical examples of protective overshadowing. I assume that Jakob will extend this protection over his family, and that’s why Mary’s cloak doesn’t overshadow to her left. This image of Mary’s protection reminded me of a line from the Cornet, when two soldiers go their separate ways:

So then I wondered if that was a standard German idea, to seek or enjoy Mary’s protection. A quick search on “schutz maria” turned up a town called Maria Schutz in Austria, but I was looking for piety, not places. Tried “schutz madonna”, got Schutzmantel Madonna right away, which simply means Protection-cloak Madonna. It’s a very common Catholic image in German-speaking cultures: 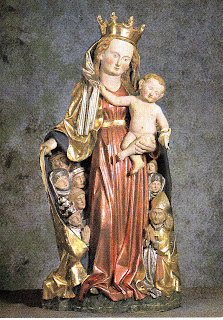 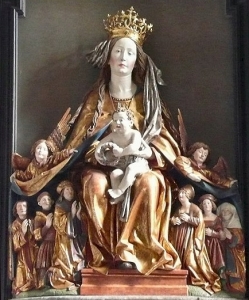 Is the Son’s swaddling cloth overshadowing his Mom?
. 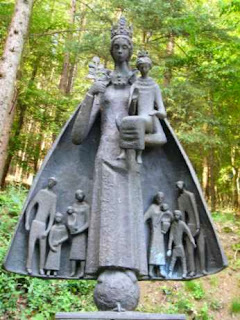 Both the Queen Mother and her Son the King wear crowns

Even popes and bishops want in.

The Schutzmantel Madonna is such a vivid image that I want to get a statue like these for catechism class. It’ll fit right in with our recurring theme of overshadowing. Yeah, I could print off a nice lettersize handout of one of these photos (and I may do so regardless) but a 3D teaching tool works better than its 2D version.

And the Schutzmantel isn’t just a religious concept. The traditional way a German man would legally demonstrate his adoption (or legitimization) of a child was to publically extend his mantel over the child; so Mary isn’t simply protecting a bunch of people- she’s adopting them as her children. There’s just something about a statue that’ll make that point better than a picture. But for class we’ll first do a quick skit of Mary extending her beach towel mantel over a couple of her peers. Once the kids figure out its significance, then I’ll pull out the statue, we’ll discuss some of the German history behind it, and connect it to the Bible examples we’ve already covered. Then right before class is over I’ll distribute a Schutzmantel Madonna handout, and have the kids explain to me how they are going to explain it to their parents for homework.