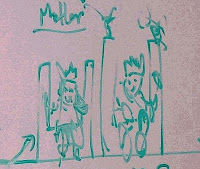 Tonight the kids were on a tear. Sometimes they get up on the wave and ride it ’til we have to go home.

Class ran from the death of David’s firstborn son and the birth of Solomon, through Elisha taking up the mantle of Elijah. As usual I established the idea of Solomon being the Son of David, which then became a Messianic term which people living centuries after Solomon applied to Jesus. I drew my usual cartoon of Solomon on his throne, with a vacant throne at his right. The kids figured who would be sitting beside him: his Momma, not his Wife Posse. I add Bathsheba, and a B and an S over the Royal Heads. We then reviewed 1Kings2 to see how Bathsheba interceded for Adonijah, and how her son honored her:

“Then Adonijah the son of Haggith came to Bathsheba the mother of Solomon./ I have one request to make of you; do not refuse me.” She said to him, “Say on.” 17 And he said, “Pray ask King Solomon–he will not refuse you–to give me Abishag the Shunammite as my wife.” 18 Bathsheba said, “Very well; I will speak for you to the king.” 19 So Bathsheba went to King Solomon, to speak to him on behalf of Adonijah. And the king rose to meet her, and bowed down to her; then he sat on his throne, and had a seat brought for the king’s mother; and she sat on his right. 20 Then she said, “I have one small request to make of you; do not refuse me.” And the king said to her, “Make your request, my mother; for I will not refuse you.” 21 She said, “Let Abishag the Shunammite be given to Adonijah your brother as his wife.”

The kids sussed out why Adonijah got Bathsheba to intercede for him (e.g., as Moses interceded for the calf-worshiping Israelites). I mention that Queen Elizabeth’s mom was also a Queen Mother, the Queen Mum. In prior years I’d jump ahead to Cana at this point, and they’d connect Jesus’n’Mary to Solomon’n’Bathsheba; and check out the last lines of the Hail Mary. But this year I did not make that jump.

Instead we moved along, getting to how Elijah fled King Ahab and Jezebel, and was Hungry in the Desert. Being Hungry in the Desert like the wandering Israelites of old, who received Miraculous Bread and Flesh in the forms of manna and quail, Elijah likewise received Miraculous Bread and Flesh (from a raven). Then we covered Elijah’s bread miracle at Zarephath: “And she went and did as Elijah said; and she, and he, and her household ate for many days. 16 The jar of meal was not spent, neither did the cruse of oil fail, according to the word of the LORD which he spoke by Elijah.”

At this point we jumped ahead to Jesus: “Y’all tell me the first time Jesus worked a miracle like this. When he did the loaves and fishes! Yes! More Miraculous Bread and Flesh! People were so impressed with Jesus’ food miracles that when Jesus asked “Who do men say that the Son of Man is?” [T]hey said, “Some say John the Baptist, others say Elijah, and others Jeremiah or one of the prophets.” Now tell me about a Jesus food miracle before the loaves. Well, at the wedding he made wine…yes, good, wine counts as food. Tell it.” And the Cana story tumbles out of the fired-up children. I interrupt to ask why the stewards talked to Mary about their problem. They stop: one child looks at the Solomon/ Bathsheba cartoon, and yells “cause it’s like Solomon and his mom! Genius, yes! Somebody tell me, what’s like Solomon and Bathsheba? Jesus loves his mom and wants to help her! Yes again! He honors her like Solomon did; and what Commandment says to do that? The…the fourth! Yes! Y’all are too smart!

Then my Magic Finger rubs out the B and S over the cartoon royalty. “Y’all tell me what initial goes here now. J for Jesus! Yes, he’s…King! Of…Heaven! Yes. And- M for Mary! Yes, ya too fast! So she’s…the King’s Mom! Yes. How come her chair is little? Well, Mary is God’s Mother, but she ain’t God, is she? No! Now remember in the Creed we say “He is seated at the right hand of the Father” so who do I still need to draw? The Father! Yes, here we go…so Jesus sits…at his Father’s right hand. Yes, and Mary…sits at Jesus’ right hand. Good children! Yes? How come God isn’t the King? God? Which flavor? The Father…why isn’t he the King? Well, which person is called the Son of David? Jesus. Yes, and the Son of David was...Solomon. Yes, so Jesus is like Solomon; not God the Father. Jesus was mashia’d, anointed like David. Not Jesus’ Daddy. So tell me about it. Jesus is the King. Yep. Is the Father jealous of his son? No, he loves him! Yes!

Just another night of Catechetical Bliss.