Not the end of the century, but the last class. I like the look and sound of Fin de Siècle more than The Last Class.

The second half of the last class is a weaving-together of assorted Biblical threads into the fabric of the Mass, especially by way of the by-now-familiar handout that compares the plan and function of a Catholic church to the Meeting Tent/ Temple: 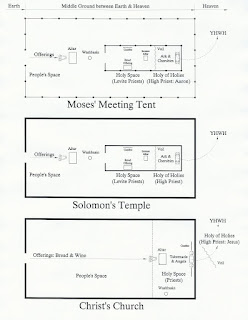 This is enhanced by reading excerpts from the Missalette and the book of Hebrews, which the kids then apply to the plans. Of course the board gets covered with sketch’n’scribble:

1. The kids help compose this quick chart which compares the Old Covenant liturgy in the Temple with that of the New Covenant’s in a Catholic church: 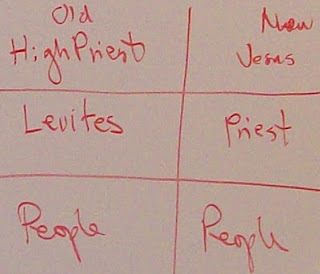 The people can see the Levites & priests; but the High Priest’s work in both cases is hidden behind a veil.

2. The Missalette lists some of the first martyrs who participate with us at Mass, such as Stephen. Here’s Stephen with his attribute, which is rocks: he was stoned to death. 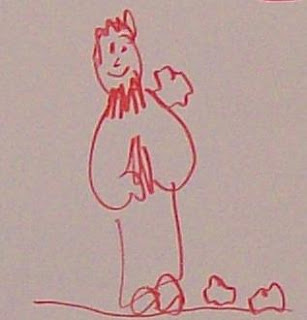 3. One of the kids jumps ahead, and says we have cherubim guarding the Tabernacle in church. He mislocates them as the high angels facing the congregation, but that’s ok. I draw what he describes, then ask if anyone can tell me where the guarding cherubim are, as opposed to the assisting angels. One of the altar boys says they’re carved into the wood screen behind the Tabernacle, and I add them in. 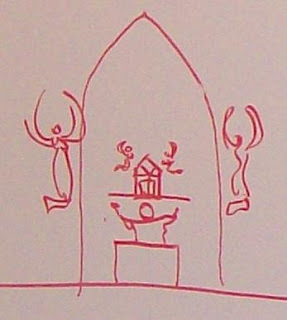 Photo of the church for comparison: 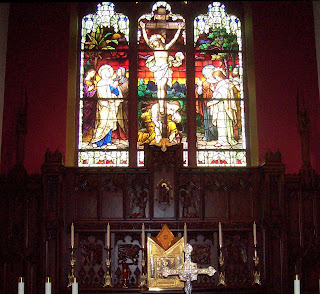 I do a blow-up of the cherubim. I like to draw their wings overshadowing the Tabernacle even though ours don’t actually do so: 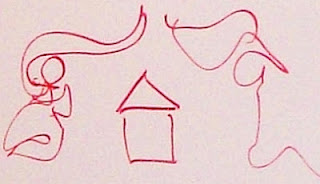 Photo of the Cherubim: 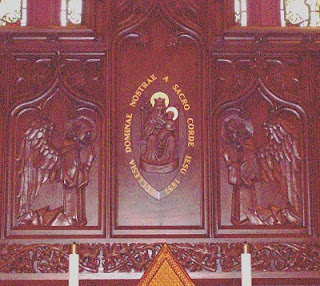 4.  With only few minutes left in the year, I ask the kids to tell me everything they can think of from the Bible that’s present in the Mass. Going clockwise from the lower left they name the Loaves & Fishes, Melchizedek, Cana, Manna, Abraham & Isaac, the Last Supper, Abel, the Crucifixion, and John da Baptis’. No prior class has done this well. 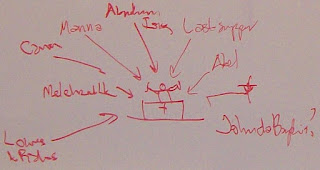 I compliment their thinking skills and add the Wedding Feast of the Lamb; then close by singing the last lines of Supper’s Ready by Genesis:

There’s an angel standing in the sun, and he’s crying with a loud voice,
“This is the supper of the mighty One”,
The Lord of Lords,
King of Kings,
Has returned to lead His children home,
To take them to the new Jerusalem.