The April 11 class covered the Mass up through the Homily. The introductory first 30 minutes looked at some key parts of Acts 3-5:

Acts 3:1 Now Peter and John were going up to the temple at the hour of prayer…  [Being Jews, the apostles still go to the Temple.]

2 And a man lame from birth was being carried, whom they laid daily at that gate of the temple which is called Beautiful to ask alms of those who entered the temple. [Who does this sound like? The blind man! Yes, or? The paralyzed man. Yes, and then? Jesus will heal him! No, Jesus is in heaven. The apostles! Well, an apostle, which one? Peter! Yes, the #1 apostle. Who was also…the first pope. Yes.]

6 But Peter said, “I have no silver and gold, but I give you what I have; in the name of Jesus Christ of Nazareth, walk.” 7 And he took him by the right hand and raised him up; and immediately his feet and ankles were made strong. 9 And all the people saw him walking and praising God… 11 While he clung to Peter and John, all the people ran together to them in the portico called Solomons, astounded. [The people are getting all cranked up like they would when Jesus did this sort of thing. And who is going to get aggravated? The Pharisees. Yes, and? The High Priest? Yes, the Temple staff.]

Acts 4:1 And as they were speaking to the people, the priests and the captain of the temple and the Sadducees came upon them, annoyed [aggravated!] because they were teaching the people and proclaiming in Jesus the resurrection from the dead. 3 And they arrested them and put them in custody… [That didn’t take long.]

5 On the morrow their rulers and elders and scribes were gathered together in Jerusalem, 6 with Annas the high priest and Caiaphas and John and Alexander, and all who were of the high-priestly family. [There you go, all the aggravated bigshots!]

13 Now when they saw the boldness of Peter and John, and perceived that they were uneducated, common men, they wondered; and they recognized that they had been with Jesus. [Uh-oh…killing Jesus was supposed to fix this problem. Now it’s worse!]

14 But seeing the man that had been healed standing beside them, they had nothing to say in opposition. “What shall we do with these men? For that a notable sign has been performed through them is manifest to all the inhabitants of Jerusalem, and we cannot deny it. 17 But in order that it may spread no further among the people, let us warn them to speak no more to any one in this name.” 18 So they called them and charged them not to speak or teach at all in the name of Jesus. [So, do you think the apostles agreed to shut up about Jesus? No! Right!]

Acts 5:12 Now many signs and wonders were done among the people by the hands of the apostles. And they were all together in Solomon’s Portico. [Back at the Temple again.]

14 And more than ever believers were added to the Lord, multitudes both of men and women, 15 so that they even carried out the sick into the streets, and laid them on beds and pallets, that as Peter came by at least his shadow might overshadow some of them. [I like how Peter’s shadow ‘overshadows’ people to heal them. Tell me about some other overshadowing y’all know. The Holy Spirit overshadowed Mary. Yes, good. Who told her? Umm…Gabriel! Yes. Another overshadowing?  The angels’ wings over the Ark? Yes, the cherubims’ wings. Any more? Remember the Shekhinah? The cloud over the Tent! Yes. Now Peter mediates God’s power such that he can overshadow, too.]

17 But the high priest rose up and all who were with him, that is, the party of the Sadducees, and filled with jealousy 18 they arrested the apostles and put them in the common prison. [Now they are past just talking tough.]

[The next day]…the captain with the officers went and brought them, but without violence, for they were afraid of being stoned by the people. 27 And the high priest questioned them, 28 saying, “We strictly charged you not to teach in this name, yet here you have filled Jerusalem with your teaching and you intend to bring this man’s blood upon us.” 29 But Peter and the apostles answered, “We must obey God rather than men.” 33 When they heard this they were enraged and wanted to kill them. [Who are you reminded of? Jesus! Yes.]

[After] they had called in the apostles, they beat them and charged them not to speak in the name of Jesus, and let them go. [The Temple staff is aggravated enough now that the apostles may be beaten up or thrown into prison or even killed if they keep blabbing about Jesus in the Temple or synagogues.]

All of that intro is to show the kids that the New Covenant Jewish Christians aren’t going be accepted by the wider Old Covenant Jewish community, and wind up going their separate way. They were used to attending Synagogue on Saturday, where they’d read or hear Scripture, pray, sing Psalms and hymns, and listen to the Rabbi comment on the readings. On Sundays at people’s houses they’d remember Easter, the Last Supper,  and Jesus’ sacrifice. But that pattern has to change.

“OK, let’s draw a picture of the Temple…here’s the courtyard where Isaiah, Jeremiah, Jesus and the Apostles would annoy the Levites. But the Christians aren’t welcome there anymore; they’re too annoying. And here’s a Synagogue. Christians can’t go there anymore either. But that’s fine, they have a New Covenant and a new Lamb anyway. So what do Christians do when peoples’ houses become too small for the congregation? They build a church? Yes. Here ya go. So over here are the Old Covenant buildings, and the church is…the New Covenant building. Yes. And what happens in a Catholic church is the New Covenant version of what happened the Old Covenant synagogues and the Temple. So- what happens in a Catholic church? Funerals? I mean on Sundays. Mass. Yes. The Mass combines the synagogue and the Temple.

“What happens in a synagogue? They read and sing? Yes, and pray; and then the Rabbi…juggles? No, he talks about stuff. Yes, usually he would comment on the readings. And do we do that in church? Yes. Right, in the first half of the Mass.

“And at the Temple? People sacrifice?  Yes, usually…a…Lamb! Yes, remind me though: what happens to the Lamb first? They kill it. Yes, then? They offer it. Yes. At Mass we don’t kill the Lamb though, we just…offer it? Yes, like Jesus offered himself at…the Last Supper! Yes, good. That’s the second half of the Mass. 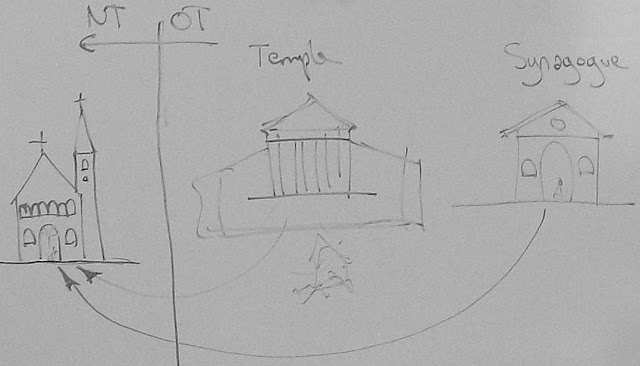 “Now that we know the Old Covenant background, let’s see how the New Covenant Mass works. Instead of using the Bible we’ll discuss bits from this Missal. So what’s the first thing that happens at Mass? The priest comes in! No! We sing! No! The bell rings! Yes……..”