I read this article today: Hades-type cave looks like heaven for archaeologists.

“Hades, the fabled underworld of the dead in ancient Greece, wasn’t the happiest place…There, departed heroes such as Achilles gathered mostly to grouse about their boredom and await the verdict of the judges of the dead. There’s a reason that it later became associated with the hell of Christianity.”

Tomorrow night’s Wednesday Sunday School lesson plan runs from Gethsemane up to the Ascension. The kids already know about Sheol/ Hades/ Hell, including references to Enoch, Elijah, and the parable of Lazarus resting in the bosom of Abraham. Reading a few lines of this article will be a diverting lead-in for discussing this bit of the Apostles’ Creed: “He descended into hell,” which itself is an intro into discussing what Jesus was actually doing in “Hell” anyway. This picture is our visual aid: 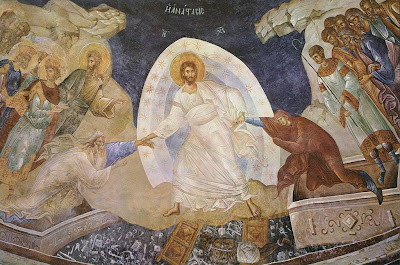 That’s right, it’s an Anastasis. And that makes the news article all the more fun. I usually mention that Anastasia is a girl’s name, but this year I’ll also read this next key bit from the paper:

“But for archaeologists, a Greek cave…contains the remains of a Stone Age village…”What you see there almost cannot be described,” says archaeologist Anastasia Papathanasiou of the Greek Ministry of Culture…” An actual woman named Anastasia is way more interesting than me just saying Anastasia is a girl’s name; and it makes a living connection to that old Greek fresco.

2. Connect the Past to the Present.

3. Connect the Textbook to Other Printed Stuff.

Now did God make sure this article was in my paper the day before the only class of the year in which I could use it; or was it just coincidence?