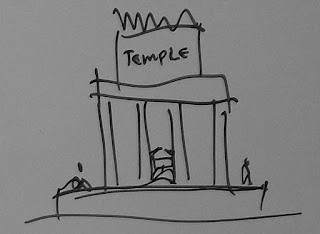 The November 23 class covered the majority of Isaiah’s prophecies, excluding all the ones which relate directly to Christmas: they’ll be covered in the Dec. 14 class. On the 30th, we quickly reviewed some of them, and launched into prophecies by Jeremiah, Ezekiel, Daniel, Micah and Zechariah. Ideally we’d have gotten through Malachi. But Malachi is the end of the New Testament, so in some ways it’s good to begin the next class with Malachi, do a review of the Old Testament, and then jump into the New.

Because there are so many prophecies, and time is tight, we only cover the ones that I think are most understandable by the kids; and/or are explicitly referred to in the New Testament or the Mass; and/or directly apply to Jesus. Each one is permanently highlighted in my Bible and temporarily sticky-tabbed so I can quickly go from one to the next.

In each case, I give a bit of background to the prophet, where he and the Jews were in that point in history, read the passage, and then ask the class how the verses will be fulfilled. The following verses overlap both classes. For brevity, a single verse here typically represents the wider passage which I would actually be reading. Likewise, the kids’ answers are usually not as pithy as what I show here. Nevertheless, the kids do their own thinking.

The Mass quotes the seraphim.

“Then flew one of the seraphim to me, having in his hand a burning coal which he had taken with tongs from the altar. 7 And he touched my mouth, and said: “Behold, this has touched your lips; your guilt is taken away, and your sin purged.”

This passage anticipates the understanding of Purgatory as a cleansing of sin through fire.

“1 There shall come forth a shoot from the stump of Jesse, and a branch shall grow out of his roots.”


The future Messiah will be a descendant of David, who was messia’d, anointed, by Samuel.


“he shall smite the earth with the rod of his mouth, and with the breath of his lips he shall slay the wicked.”

But the Messiah won’t be tough guy like David.

“In that day I will call my servant Eliakim the son of Hilkiah, 21 and I will clothe him with your robe, and will bind your girdle on him, and will commit your authority to his hand; and he shall be a father to the inhabitants of Jerusalem and to the house of Judah. 22 And I will place on his shoulder the key of the house of David; he shall open, and none shall shut; and he shall shut, and none shall open.”

Jesus will likewise give keys to Peter. This section of Isaiah 22 is acted out, it’s more than just asking questions.

God won’t limit his blessings to just the Chosen People.

“3 A voice cries: “In the wilderness prepare the way of the LORD, make straight in the desert a highway for our God. 4 Every valley shall be lifted up, and every mountain and hill be made low; the uneven ground shall become level, and the rough places a plain.”

Israel would be happy to get another David-type Messiah…but Isaiah says prepare the way for God. Later on, John the Baptist will quote Isaiah at the Jordan river.

“1 Behold my servant, whom I uphold, my chosen, with whom I am pleased; I have put my Spirit upon him, he will bring forth justice to the nations. 2 He will not cry or lift up his voice, or make it heard in the street…”

At Jesus’ baptism at the Jordan, God will quote Isaiah. And if this is a Messiah prophecy, why is he such a wallflower?

“13 Behold, my servant shall prosper, he shall be exalted and lifted up, and shall be very high. 14 As many were astonished at him– his appearance was so marred, beyond human semblance…”

“Marred...like damaged, beat up? Yes, how does this apply to Jesus? The soldiers beat him up? Yes, and? Whipped him? Yes, and? They stuck the crown of thorns on him? Yes, good.”

“5 But he was wounded for our transgressions, he was bruised for our iniquities; upon him was the chastisement that made us whole, and with his stripes we are healed.”

The soldiers whipped Jesus which made blood stripes on him.

“he poured out his soul to death….yet he bore the sin of many”

Jesus died for our sins.

“To the [foreigners] who keep my sabbaths, who choose the things that please me and hold fast my covenant, 5 I will give in my house and within my walls a monument and a name better than sons and daughters.”

God will adopt people who aren’t Jews to be his children.

“…these I will bring to my holy mountain, and make them joyful in my house of prayer; their burnt offerings and their sacrifices will be accepted on my altar; for my house shall be called a house of prayer for all peoples.”

People who love God can come to the temple just like Chosen People; and later on Jesus talks about the House of Prayer.

“I will gather yet others to him besides those already gathered.”

God will love more than just the Chosen People. What does the Bible call those other people? Pagans? Close, but no…Gentiles? Yes, good.

“Are you not children of transgression…who slay your children in the valleys, under the clefts of the rocks?”

Some Jews would still sacrifice their children to baby-eating false gods.

“Stand in the gate of the LORD’s house, and proclaim there this word”

Jeremiah stands at the temple, as Isaiah did, and as Jesus will do.

If the Jews don’t stop ignoring God, he won’t dwell among them in the temple.

“Will you steal, murder, commit adultery, swear falsely, burn incense to Baal, and go after other gods that you have not known, 10 and then come and stand before me in this house, which is called by my name, and say, ‘We are delivered!’–only to go on doing all these abominations?”

You can’t expect God to ignore your sins.

“1 Has this house, which is called by my name, become a den of thieves in your eyes?…”

In the New Testament, Jesus quotes Jeremiah at the temple.

“12 Go now to my place that was in Shiloh, where I made my name dwell at first, and see what I did to it for the wickedness of my people Israel…therefore I will do to the house which is called by my name, and in which you trust, and to the place which I gave to you and to your fathers, as I did to Shiloh.”

God abandoned Shiloh and never dwelled there again. Would he quit living in the temple if Israel kept on sinning?

“And they have built the high place of Topheth, which is in the valley of the son of Hinnom, to burn their sons and their daughters in the fire…”

“Behold, the days are coming, says the LORD, when I will make a new covenant with the house of Israel and the house of Judah”

Jesus talks about a New Covenant at the Last Supper, and we hear those words at Mass, too.

“I will put my law within them, and I will write it upon their hearts”

A law written on your heart is better because it’s based on love.

Sprinkling water is how Levitical priests would purify lepers; it’s also like baptism, and when Naaman immersed himself in the Jordan to get clean of his leprosy. Sometimes there’s immersion, sometimes sprinkling.

Wasn’t Daniel put in the lion’s den, but he didn’t get eaten? Yes, that’s him. Here’s part of a prophetic vision Daniel had:

13 I saw in the night visions, and behold, with the clouds of heaven there came one like a Son of Man…”

Jesus would refer to himself as the Son of Man. [the kids didn’t know this at all, I had to just tell them.] And at the Ascension he went up in clouds. And at the Second Coming he’ll come down on clouds.

“But you, O Bethlehem Ephrathah, who are too little to be among the clans of Judah, from you shall come forth for me one who is to be ruler in Israel, whose origin is from of old, from ancient days.”

David was born there! And Jesus will be born in Bethlehem too!

“9 Rejoice greatly, O daughter of Zion! Shout aloud, O daughter of Jerusalem! Lo, your king comes to you; triumphant and victorious is he, humble and riding on an ass, on a colt the foal of an ass.”

“So in the Bible, what’s an ass? A donkey! Yes, so how does Jesus fulfill this prophecy? He came into town on a donkey! Yes, what town? Jerusalem! Yes, and the people thought he was...the Messiah! Yes, like who? David!  Yes.”

Classtime ran out at this point. Next week we’ll finish the Old Testament with a look at Malachi, and review the whole New Testament in 15 minutes or so. Then we’ll jump into the New with a discussion of the Immaculate Conception, which will be the day after class.