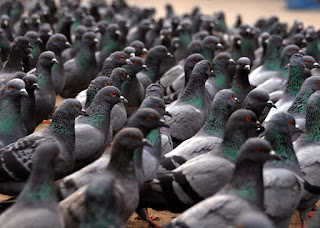 We are not grumbling

When we cover Exodus, I emphasize to the kids how the Israelites whine to Moses about anything that isn’t to their liking. For example in Numbers 11, they are tired of eating manna: “the children of Israel also wept again, and said, Who shall give us flesh to eat? We remember the fish, which we did eat in Egypt freely; the cucumbers, and the melons, and the leeks, and the onions, and the garlick. But now our soul is dried away: there is nothing at all beside this manna before our eyes.” Waaah!

They whine so much that Moses tells God, “I am not able to bear all this people alone, because it is too heavy for me. And if thou deal thus with me, kill me, I pray thee, out of hand, if I have found favour in thy sight; and let me not see my wretchedness.” That’s right, just kill me now. (Priests probably never have such sentiments; modern flocks are much more docile.)

“Whine” is my word; it’s more fun than complain, gripe or grumble. But Exodus in the KJV uses none of those words: it says “murmur,” or more clearly, “murmur against.”  I’m not fond of using murmur in the sense of grumbling: to me, murmur is to speak quietly in love, the very opposite of grumbling. Too bad for me. Murmur is a Romance (not that kind of romance) word which English gets from Latin through French; in St. Jerome’s Latin Vulgate, the word for Israelite grumbling is murmurare. Oh well, I lose this one.

Murmur is probably imitative of some natural rhythmic sound, mur-mur-mur… a creek? Likewise, babble imitates the ba-ba-bla-bla of babies or foreigners, and descends from Greek barbaros through Latin babbulus. And the coo-cooing of doves is expressed in Greek by the verb gogguzo / γογγύζω, which means-  murmur. In both Old (LXX) and New Testaments, gogguzo is the Greek word for grumble, murmur. A Greek noun for murmur is mourmourisma/ μουρμούρισμα, but it doesn’t show up in the Bible. Still nice to know. Now I wonder where the Romans got murmurare from…I can’t imagine.

The murmur business matters in class because I use murmuring to connect two scenes: the Israelites’ desert murmurings against Moses right before the manna bread miracle; and the murmurings against Jesus when he hints at a future bread miracle. That is, Exodus doesn’t speak about symbolic “bread from heaven,” and neither does Jesus. In both instances the people murmur their obstinacy.

Exodus 16: “And the whole congregation of the children of Israel murmured against Moses and Aaron in the wilderness: And the children of Israel said unto them, Would to God we had died by the hand of the LORD in the land of Egypt, when we sat by the flesh pots, and when we did eat bread to the full; for ye have brought us forth into this wilderness, to kill this whole assembly with hunger. Then said the LORD unto Moses, Behold, I will rain bread from heaven for you.”

Exodus 16 in the KJV says murmur eight times, including this packed sentence: “And Moses said…the LORD heareth your murmurings which ye murmur against him: your murmurings are not against us, but against the LORD.”

Then in John 6: “Our fathers ate the manna in the wilderness; as it is written, ‘He gave them bread from heaven to eat.’/   “I am the bread of life; he who comes to me shall not hunger, and he who believes in me shall never thirst./  The Jews then murmured at him, because he said, “I am the bread which came down from heaven.” They said, “Is not this Jesus, the son of Joseph, whose father and mother we know? How does he now say, ‘I have come down from heaven’?” Jesus answered them, “Do not murmur among yourselves./  For my flesh is food indeed, and my blood is drink indeed.”/ Jesus, knowing in himself that his disciples murmured at it, said to them, “Do you take offense at this? Then what if you were to see the Son of man ascending where he was before?”

Remember, the Old Testament was translated into Greek about 200 years before the first Gospels were written. Writers of the New Testament would surely know how a given Greek word was (or wasn’t) used in the O.T. before using it (or not) in the New. So John’s author says gogguzo / γογγύζω / murmur when people get cranky as Jesus prophesies his own bread/ flesh miracle through the manna miracle, which also followed “murmuring.”

But the writer didn’t have to say murmur. He could’ve used other Greek N.T. verbs such as mempsimoiros / μεμψίμοιρος / complain (Jude 1:16: “These are murmurers, complainers, walking after their own lusts…”), but didn’t. He used the one word that makes a clear connection to the critical Old Testament antecedents. In fact, he takes every opportunity to say murmur, as though he were trying to make the connection as obvious as possible.

In class, murmur just doesn’t register with 6th graders, so I say grumble, which is an accepted translation of goggyzo.The thing is, to say grumble is to take a step away from goggyzo’s literal, imitative murmuring sound of doves’ goo-goo. My consolation is that there are only 5 other people on the planet besides me who are interested, only 2 of them care, and none of them are in 6th grade Wednesday Sunday School. So grumble it is.

But it’s worth checking a few translations, isn’t it. Hello…isn’t it? Sure it is.

The Douay-Rheims and the King James say murmur in both Exodus and John, and everywhere else; but never say grumble at all, even to translate synonymous Greek verbs, which I will not list here. You’re welcome. In this instance the D-R and KJV are utterly consistent and simple. Ditto Jerome’s Vulgate: unsurprisingly it always uses murmurare. The RSV says murmur in both passages, but may say grumble elsewhere. I can live with that; to an extent, it tends to make the use of murmur more distinctive. Good ol’ RSV. The NIV, which I usually object to, says grumble all the time and never says murmur. Weirdly enough, for once I prefer the NIV’s translation for the kids- and probably for most adults. Stranger yet, the NAB, which is the Bishops’ Official Catholic Bible, says the Israelites grumbled in the desert, and the Jews murmured in Galilee. As my mother-in-law says: oh dear. To me that obscures a connection that’s pretty clear in Greek, and in every other translation I’ve looked at. And not just a connection, but a Catholic connection. Why wouldn’t the approved Catholic Bible be all over this?

Dunno….everybody else is whether they intend to be or not.