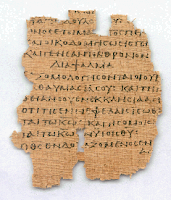 Can you read this? Me neither!

My Wife the Energizer Bunny put on a Post-Vespers Christmas dinner party last night. I would post the menu but don’t want to hear wailing & gnashing of teeth in the darkness. Anyway, late in the evening (not that late) I was talking with a couple of former Protestant clergymen* about how the Bible becomes mo’ betta when viewed through a Catholic lens. Because it’s Advent, we were discussing how examples of overshadowing in the Old Testament (O.T.) provide a more comprehensive view of Mary when they’re understood simultaneously with Luke’s line, “The Holy Spirit will come upon you, and the power of the Most High will overshadow you.” As in Luke’s case, the word “overshadow” is explicitly used in verses such as this detail of the Ark of the Covenant: “The cherubim shall spread out their wings above, overshadowing the mercy seat with their wings, their faces one to another; toward the mercy seat shall the faces of the cherubim be.” The Hebrew word translated as overshadow is sakhakh (סכך), which is more often translated as cover. Deciding whether to say cover or overshadow in English can depend on the Greek words used in the Septuagint translation.

By the way, in Greek will overshadow is episkiazo (ἐπισκιάζω). Epi means over, and skiazo is, umm…I forgot. Anyway, skiazo and shadow share a common Indo-European root, and over a few millennia differ only a bit more than skirt and shirt, or shin and skin differ over a few centuries. And in the Vulgate, to overshadow is obumbrare. The Latin stem for shadow, umbra, is also found in umbrella, and sombrero.

Besides sakhakh, there are other Hebrew words that indicate the concepts of covering/ protecting/ selecting/ possessing/ separating/ dedicating, but they aren’t necessarily translated by overshadow. For example, in the book of Ruth, Ruth tells Boaz, “I am Ruth, your maidservant; spread your skirt over your maidservant, for you are next of kin.” (Thus Boaz would show intent to marry Ruth). Likewise, in 1Kings, Elijah “passed by [Elisha] and cast his mantle upon him,” showing his selection and protection of Elisha, his intended successor. Ruth is an endearing story, but I’ve never used it in Catechism class because there is not enough time to treat every interesting thing in the Bible. We do act out the Elisha bit and refer to it later on at the Annunciation.

Kids like things to be clear and simple (kind of like adults now that I think about it). So in class when I read “the power of the Most High will overshadow you” from Luke, I like to review supporting verses which also use the word overshadow. A Greek translation of the Bible will say to overshadow or to shadow in more verses than I can use in 6th grade, but English isn’t too reliable in this respect. Different English Bibles will use the word overshadow in different verses, and only a few times; although I expect that they all use it with regard to the Annunciation and the Transfiguration. Otherwise it’s hit and miss in English. So if I read a verse in class from my NAB in English which doesn’t say “overshadow” (but Greek does), I say “overshadow” to keep it consistent for the kids.

Up until this year the word overshadow comes up in these cases:

The Ark overshadowed by the cherub’s wings.

The Ark overshadowed by the Glory Cloud, God’s Presence.

Psalm 91: “He will overshadow you with his shoulders: and under his wings you shall trust,” which dovetails well with the overshadowing cherubs’ wings.

Mary overshadowed by the Holy Spirit.

The Transfiguration: “He was still speaking, when lo, a bright cloud overshadowed them, and a voice from the cloud said, “This is my beloved Son, with whom I am well pleased; listen to him.”

And the concept expressed by overshadowing is treated in an Elijah-covers-Elisha skit. And maybe someday (time permitting) we’ll do the Ruth bit, too.

That’s plenty of overshadowing for 6th grade. But last night after the party I was rechecking instances of epi-skazein/ over-shadow, and noticed this:

“…they even carried out the sick into the streets, and laid them on beds and pallets, that as Peter came by at least his shadow might fall on some of them.” To which you say, “Close, but no banana- that’s not quite the same as overshadowing.” You’re right, it’s not. But that verse in Greek reads: ὥστε καὶ εἰς τὰς πλατείας ἐκφέρειν τοὺς ἀσθενεῖς καὶ τιθέναι ἐπὶ κλιναρίων καὶ κραβάττων, ἵνα ἐρχομένου Πέτρου κἂν ἡ σκιὰ ἐπισκιάσει τινὶ αὐτῶν. I can’t read all that either, but look at this bit: σκιὰ ἐπι-σκιάσει. That’s skia epi-skiasei, [the] shadow [might] over-shadow. So when Luke wrote Acts, he was careful to say overshadow, just as he did in his Gospel….could it possibly matter? Since 1999 I’ve been connecting this bit of Acts to sacraments (God’s power may flow through physical media), but have never connected it to overshadowing until now. I have to assume that recent translators decided “shadow….overshadow” was too clunky for readers of the word-rich English language. Well, I disagree: without the right words, one can’t make the right connections.

Now I’m curious about which Bibles do say shadow-overshadow:

Douai-Rheims? Yes: “his shadow at the least might overshadow any of them.”

KJV? Yes: “the shadow of Peter passing by might overshadow some of them.”

Revised Standard Version- Catholic Edition? No: “his shadow might fall on some of them.” Ya done me wrong, RSV-CE!

Catholic NAB? No: “his shadow might fall on one or another of them.”

NIV? No: “Peter’s shadow might fall on some of them as he passed by.”

If St. Luke were alive today he’d be rolling over in his grave.
Traduttore, traditore.

* One of the former Protestant clergy posts here on the same conversation.