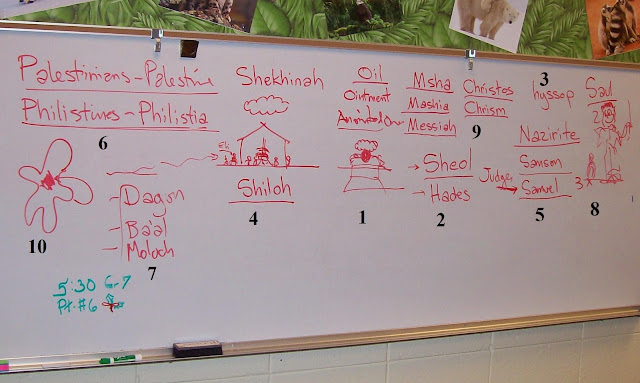 Behold the board at the end of the 10/26 class. As usual, much of it was erased and then refilled. This photo corresponds to the lesson plan as it runs from settling down in Canaan through the anointing of David. I’m not going to discuss everything we covered, just what is on the board.

1. The Ark of the Covenant.  Some review of last week’s class. The Glory Cloud/ Shekhinah is introduced, which settles on/ overshadows/ dwells in the Ark and Meeting Tent. At the far left a sketch of Moses atop Sinai  under the Glory Cloud/ Shekhinah has been erased. Tent drawing to left illustrates how the Glory Cloud overshadowed the Tent during the 40 years in the desert, and moved away when it was time to pull up stakes. Overshadowing implies protection. (future connections to Elijah & Elisha, the Holy Spirit & Mary.)

2. Review of atonement, forgiveness, and  Levitical sacrifice is followed by the question, “Could good Israelites who had their sins forgiven & atoned for by the sacrificial system go to Heaven?” If not, then where did they go? (future connection: Jesus descended into “Hell.”)

3. The ritual mixing of cleansing water and atoning blood is introduced (Lev 14): “This shall be the law of the leper for the day of his cleansing. He shall be brought to the priest; 3 and the priest shall go out of the camp, and the priest shall make an examination. Then, if the leprous disease is healed in the leper, 4 the priest shall command them to take for him who is to be cleansed two living clean birds and cedarwood and scarlet stuff and hyssop; 5 and the priest shall command them to kill one of the birds in an earthen vessel over running water. 6 He shall take the living bird with the cedarwood and the scarlet stuff and the hyssop, and dip them and the living bird in the blood of the bird that was killed over the running water; 7 and he shall sprinkle it seven times upon him who is to be cleansed of leprosy…” (future connections to the Crucifixion and Baptism)

4. The Israelites settle down in Canaan. God dwells in the Meeting Tent at Shiloh. I add Eli sitting on his stool to the left while his corrupt sons profane the Dwelling.

5. Review of Samson introduces the word Nazirite, someone who is dedicated and separated to fully serve God. (future connection to John the Baptist, priests and nuns) Samuel’s story follows Samson’s, including Samuel being called by God 3 times and responding in the affirmative 3 times, which makes an oral contract. (future connections to Elijah & Elisha, Jesus & Peter)

6. Connecting the past to the present. A reminder that the Israelites still fight with their neighbors over the Promised Land.

7. Israel’s enemies worshiped an assortment of baby-eating false gods, yet they were also afraid of the God of Israel: “Israel went out to battle against the Philistines….Israel was defeated by the Philistines, who slew about four thousand men on the field of battle. 3 And when the troops came to the camp, the elders of Israel said, “Why has the LORD put us to rout today before the Philistines? Let us bring the ark of the covenant of the LORD here from Shiloh, that he may come among us and save us from the power of our enemies….the Philistines were afraid; for they said, “A god has come into the camp.” And they said, “Woe to us! For nothing like this has happened before. 8 Woe to us! Who can deliver us from the power of these mighty gods? These are the gods who smote the Egyptians with every sort of plague in the wilderness.” (1Sam 4)

Sinful Israel is defeated, Eli & sons die. The Ark is captured, but due to plagues including my favorite plague, hemorrhoids, the Ark is returned to Israel. But the LORD never dwells again in Shiloh, which remains desolate. (future connections to Jeremiah, the Temple, and Jesus)

8. Confronted with the prospect of being misgoverned by Samuel’s no-good sons, Israel insists on a king after Samuel. Samuel picks Saul, who as we see from the picture is tall and handsome.

9. Saul has his problems; God sends Samuel out to secretly anoint a new king: David. We act out the anointing process. The kids learn the common meaning of Messiah, Christos, and Anointed One. Some etymologically related words are discussed, especially chrism and msha, the Egyptian word for crocodile, whose oil was used to anoint Pharaoh. (lots of connections to all this)

10. The Gingerbread Man represents the unity of Body and Soul. This had to do with the hypocritical behavior of Eli & Sons. I usually draw him when the issue of Faith and Works comes up. The arrow from the body back to the soul indicates that one’s works reflect one’s inward disposition; so if your works oppose your faith, then you probably don’t really believe. (connects to constant theme of Faith & Works)

Catechists, never forget the words of St. Francis of Assisi, Petter of Squirrels: “Preach the Gospel at all times; when necessary, draw pictures.”