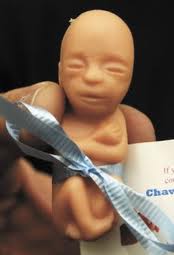 Must be a boy

Last night we started with the miraculous conception & birth of Isaac, and stopped as Moses returned to Egypt. In between we covered yet another in a series of miraculous conceptions, that of Jacob & Esau. These conceptions are not as miraculous as Jesus’ conception; nevertheless, when a heretofore barren marriage becomes fruitful due to divine intervention, it’s a miracle.

Here’s the Bible lead-in to the story:

And Isaac prayed to the LORD for his wife, because she was barren; and the LORD granted his prayer, and Rebekah his wife conceived. 22 The children struggled together within her; and she said, “If it is thus, why do I live?” (Genesis 25)

I like to dramatize that Jacob and Esau don’t get along even before they were born. I take two rubber fetuses out of my prop bag.

“Hey, who’re these babies? Who are the two boys that Isaac and Rebekah had? Umm, Jacob and Esau? That’s right, and they already don’t get along. Look, I’m Rebekah, here they are in my womb, fighting [I bang them into each other in front of my stomach like Punch & Judy puppets, accompanied by grunting sounds]. “There ain’t enough room in this womb for the two of us! Then you get out! No, you get out!” And Rebekah is groaning, “Oww, y’all settle down in there!” That’s weird! What’s weird? Those things. What things? Those babies, they’re weird looking. Oh yeah? I think they’re cute [I give ’em a kiss], they look like my kids when they were growing in my wife…would you like to kiss them? No! Hey now, don’t get squeamish on me, this is what you looked like when you were a couple of months old and still in your momma….and I bet she loved you even if you thought you were weird-looking.” This provides an intro to spend a couple of minutes on the unborn: they’re already people, even if they’re weird-looking; even when they were just a dot of a fertilized egg, they were people; everyone looks like this at some point; it’s normal.

After the kids have settled back down we return to the story; but not until they are ok with the idea that these squirmy little goobers are already human beings. It’s just the first of many appearances that the rubber feti will make during the catechetical year as part of an ongoing pro-life theme.