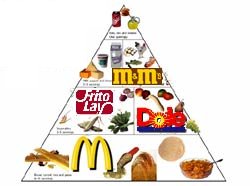 Let’s treat them in chronological order.

The Israelites were 6 weeks away from Egypt, 16 chapters into Exodus, and slap out of vittles:  “…the whole congregation of the people of Israel murmured against Moses and Aaron in the wilderness (murmur against is the nice way to say whine about), and said to them, “Would that we had died by the hand of the LORD in the land of Egypt, when we sat by the fleshpots and ate bread to the full; for you have brought us out into this wilderness to kill this whole assembly with hunger.”

I have to digress already. This is a timeless line: “…we sat by the fleshpots and ate bread to the full.” I love the visceral “fleshpots,” and the vivid imagery (I think of Homer Simpson: mmm…fleshpots). Hard to believe that at least one modern Bible version (which shall remain nameless) says “we sat around pots of meat and ate all the food we wanted.” I have reasons beyond mere opinion for ummm, murmuring about this phrasing which I’ll explain presently. And I probably shouldn’t mention that “pots-meat-food” brings this image to mind: 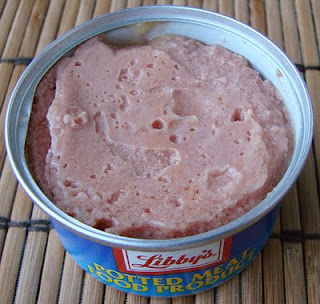 So anyway, you know the story: “And the LORD said to Moses, “I have heard the murmurings of the people of Israel; say to them, ‘At twilight you shall eat flesh, and in the morning you shall be filled with bread; then you shall know that I am the LORD your God.” In the evening quails came up and covered the camp; and in the morning dew lay round about the camp. And when the dew had gone up, there was on the face of the wilderness a fine, flake-like thing, fine as hoarfrost on the ground. When the people of Israel saw it, they said to one another, “What is it?” For they did not know what it was. And Moses said to them, “It is the bread which the LORD has given you to eat.”

But aren’t quail flesh and bread separate food groups? Well…yes. Actually I’m not so interested in making a pyramid of food groups as I am in making one of food miracles. So the quail and manna together are the first food miracle. Already you can see the parallel between the people whining in a KKollwitz-approved Bible about a lack of flesh and bread, and the LORD saying he’s gonna give them…flesh and bread.

Amid a God-induced drought, the LORD’s authorized agent Elijah leaves Israel and heads to pagan Zarephath for his own safety. Food was scarce (drought = famine), but no worries: “And the ravens brought him bread and flesh in the morning, and bread and flesh in the evening; and he drank of the brook.” I don’t count that as Food Miracle 2 though. It’s a reiteration of the bread and flesh theme, and a prologue to miracle 2:

Upon his arrival, Elijah asks a starving widow for a bit of bread: “…he called to her and said, “Bring me a morsel of bread in your hand.” And she said, “As the LORD your God lives, I have nothing baked, only a handful of meal in a jar, and a little oil in a cruse; and now, I am gathering a couple of sticks, that I may go in and prepare it for myself and my son, that we may eat it, and die.” And Elijah said to her, “Fear not; go and do as you have said; but first make me a little cake of it and bring it to me, and afterward make for yourself and your son….And she went and did as Elijah said; and she, and he, and her household ate for many days. The jar of meal was not spent, neither did the cruse of oil fail, according to the word of the LORD which he spoke by Elijah.” Apparently the food lasted until the drought ended.

“Elisha came again to Gilgal when there was a famine in the land. And as the sons of the prophets were sitting before him…A man came from Baal-shalishah, bringing the man of God bread of the first fruits, twenty loaves of barley, and fresh ears of grain in his sack. And Elisha said, “Give to the men, that they may eat.” But his servant said, “How am I to set this before a hundred men?” So he repeated, “Give them to the men, that they may eat, for thus says the LORD, ‘They shall eat and have some left.” So he set it before them. And they ate, and had some left, according to the word of the LORD.”

That all seems weirdly familiar…why, it reminds me of Jesus’ loaves & fishes miracle! Oops, it’s the other way around: Jesus’ miracle recalls Elisha’s, which recalls Elijah’s.

Those three Old Testament miracles form the base of the pyramid. The next three will form their own little pyramid, but it’s given more heft and height by being built on this sturdy O.T. base.

“On the third day there was a marriage at Cana in Galilee, and the mother of Jesus was there; Jesus also was invited to the marriage, with his disciples. When the wine failed, the mother of Jesus said to him, “They have no wine.” And Jesus said to her, “O woman, what have you to do with me? My hour has not yet come.” His mother said to the servants, “Do whatever he tells you.” Now six stone jars were standing there, for the Jewish rites of purification, each holding twenty or thirty gallons. Jesus said to them, “Fill the jars with water.” And they filled them up to the brim. He said to them, “Now draw some out, and take it to the steward of the feast.” So they took it. When the steward of the feast tasted the water now become wine, and did not know where it came from (though the servants who had drawn the water knew), the steward of the feast called the bridegroom and said to him, “Every man serves the good wine first; and when men have drunk freely, then the poor wine; but you have kept the good wine until now.” This, the first of his signs, Jesus did at Cana in Galilee, and manifested his glory; and his disciples believed in him.” Let’s agree right off the bat that wine is food. If you don’t think so, ask an Italian.

This miracle is particular. Unlike the prior three, it’s transformative. Not a little bit of wine, or meal, or oil multiplied into a lot, but water turned into wine, and no going back. Count on any witnesses to this miracle to recognize Jesus is a food-miracle-worker like Old Testament experts Moses, Elijah and Elisha; but maybe more…sophisticated in his miracle-working? Count on them to also tell others, creating expectations.

As [Jesus] went ashore he saw a great throng; and he had compassion on them, and healed their sick. When it was evening, the disciples came to him and said, “This is a lonely place, and the day is now over; send the crowds away to go into the villages and buy food for themselves.” Jesus said, “They need not go away; you give them something to eat.” They said to him, “We have only five loaves here and two fish.” And he said, “Bring them here to me.” Then he ordered the crowds to sit down on the grass; and taking the five loaves and the two fish he looked up to heaven, and blessed, and broke and gave the loaves to the disciples, and the disciples gave them to the crowds. And they all ate and were satisfied. And they took up twelve baskets full of the broken pieces left over. And those who ate were about five thousand men, besides women and children.”

This miracle is clearly based on Elisha’s, so much so that the Gospel writers borrowed the basic story line and changed the details. Surely people left that meal chattering about the Elisha-ness of it all, and what its significance might be. Of course the next day they found out that Jesus used the loaves & fishes to prepare them to hear the bizarre Bread of Life discourse, and accept it not through experience or understanding, but through faith. This is the point where the food-miracle business gets a bit tough on the followers. Yesterday’s miracle was real, literal; they felt it in their bellies. And the Old Testament miracles: they were literal…right? But Jesus’ followers took the literalness of Elisha’s loaves, and Moses’ flesh & bread on faith. Now Jesus likewise expects to be accepted through faith when he says “the bread which I shall give for the life of the world is my flesh.” Is it coincidence that a day earlier Jesus whipped out an Elisha bread-miracle, and now he speaks Moses-like of flesh and bread?

You can imagine the arguments that even the apostles must have had between this Passover and the next one, the occasion of…

Food miracle #6, the tip of the iceberg, the top of the food miracle pyramid, the Last Supper:

At this climactic dinner,  amidst a torrent of information from Jesus, an apostle might reasonably think, “Aah, Jesus is recalling that flesh-and-bread eating business from last Passover. But could He mean this literally? Of course, changing one thing into something else that’s better ain’t the usual, but all that wine at Cana a few years ago was real. The loaves and fishes were real last year; and Jesus plainly drew on Elisha’s miracle…and through that miracle, Elijah’s at Zarephath. And He clearly said bread and flesh, as in Exodus when our ancestors ate manna and quail, and when the raven helped Elijah in 1Kings. If we don’t believe those were miracles we may as well be pagans. And the Baptist calling him the Lamb. Wait…what’s that about blood and covenant? Is he referring to Jeremiah? So is this bread truly His flesh? Well…for right now let’s say maybe, and we can discuss it with Jesus later…hey, Judas, where ya goin’?”

So: why would Jesus stand atop a pile of food miracles stretching back to Exodus in order to cap it with mere food symbolism?

Well, he wouldn’t; and didn’t.