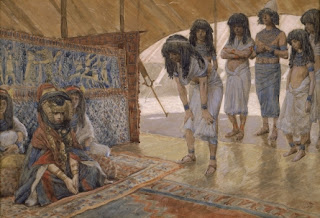 Most names mean something. In some cases the meaning is plain: Prudence, Grace. Other names have meanings that are less obvious: Fletcher (arrowmaker, from the French flèche, arrow).  To an Anglophone, meanings of foreign names are practically inaccessible, such as the Turkish girl’s name Birsen. Birsen comes from bir, one; and sen, you. The meaning in English isn’t so much one-you as it is only-you. Very sweet. Sometimes I tell my wife, “You’re the one,” and recall that Turkish name.

In Wednesday Sunday School, depending on a name’s relevance to the material, I’ll tell the kids what a name means. But then I make them tell me why it matters. For example in the first class of the year, we start with Creation. Genesis says, “God said, Let us make man in our image…And the LORD God formed man [of] the dust of the ground…” Swapping out some English for Hebrew gives us, “God said, Let us make adam in our image…And the LORD God formed adam [of] the dust of the adama…”  Then through quick discussion the kids figure out: Adam got his name by being the first man; that first man was made of earth; and his name helps to explain these things about him. It’s good that there’s an easy name to figure out in the beginning of the year.

Less easy is Isaac, which means Laughter. But if I’ve adequately communicated to the class how sad Abraham and Sarah were that their love had not created any children, then someone will get it in short order. Knowing what Isaac means then makes it easier for them to grasp how awful it was for God to ask Abraham to sacrifice his son, to kill laughter.

We treat other names as well, especially the -el- names: Samuel, Elisha, Gabriel, just so they get the hang of recognizing that -el- means God, as in Elohim. My favorite -el- name is Elizabeth, I’ll usually explain it just for fun. Eliysheba,  אֱלִישֶׁבַע combines God אֱלִ and seven שֶׁבַע to mean “God is my oath,” “sworn to God,” or my preferred expression, “consecrated to God.” Seven is a holy number, so to seven oneself is to swear, take an oath.  Kinda fun.

Then this weekend I read this post: Seven Sacraments and the Westminster Confession of Faith which extended the seven/oath concept into an understanding of why seven is the correct number of sacraments.  The article reminded me of Elizabeth, and I was prompted to refresh myself on the details of the name.  Turns out that seven and oath aren’t quite the same word in Hebrew.  We might think of them as fraternal twins, like skin/shin, shirt/skirt, ship/skiff, ear/hear: words that used to be one word, but drew apart just enough to distinguish related, but distinct, meanings.  In the Hebrew seven/oath case, both words come from a common root…a common three-letter root…a Semitic Triliteral Root!  Of course!  I should have known.

Long ago I was active friends with a group of Turks (we still keep in touch), went to Turkey,  learned some Turkish.  One of the words I liked was kitap, book.  On one occasion I heard someone say what I thought was kitap, but not quite: katip. Is katip related to kitap?  Yes: katip means author.  But those aren’t Turkish words, they’re Arabic words which were grafted onto Turkish, as French was grafted onto English.

Unlike Turkish, Arabic isn’t fond of the p-sound.  Thus, Arabic says kitab for book; katib for author; and kuttab for primary school.  In Arabic, the three sounds k-t-b (or q-t-b) form a triliteral root which itself isn’t a word per se, but from which a family of writing/book words spring.  Arabic has hundreds of these roots, and shares them with other Semitic languages, including Aramaic and Hebrew.  For example in Hebrew, a ktuba is a marriage contract.  Just to get a better feel for how these roots work, here are a couple of well-known Semitic roots: Islam/surrender, salim/purity, and salem/peace spring from s-l-m; and s-b-t generates shabbat/ to desist (Sabbath).

Less familiar is the s-b-a root, which shows up in Elizabeth. S-b-a generates a bundle of words whose similarites are Biblically significant:

I understand that in the oldest written Hebrew that these were all spelled the same, that is, with the three letters Shin ש, Bet ב , and Ayin ע , but lacking the jots & tittles that add differentiating stress & vowel information.  So before those vowel points existed, a reader would have to already know more or less what the s-b-a root meant in given passage, and be aware of all the overlapping meanings even if one made more (but not necessarily exclusive) sense than the others.

And as the Hebrew in Genesis makes a point about earth and Adam, so it also makes a useful point about שבע s-b-a in chapter 21. What follows is way edited.

After the destruction of Sodom & Gomorrah, Abraham and Sarah journey to Gerar, whose king is Abimelek (m-l-k, malik, king, if you must know).  Like Pharaoh before him, Abimelek wants to add Sarah to his harem (women can still be babes when they’re older). After a misunderstanding as to Sarah’s marital status, Abraham and Abimelek make nice, and later swear a non-aggression pact between themselves:

At that time Abimelech…said to Abraham, “God is with you in all that you do…swear/shaba to me here by God that you will not deal falsely with me or with my offspring or with my posterity, but as I have dealt loyally with you, you will deal with me and with the land where you have sojourned.” And Abraham said, “I will swear/shaba.”  When Abraham complained to Abimelech about a well of water which Abimelech’s servants had seized, Abimelech said, “…I have not heard of it until today.” Abraham set seven/sheba ewe lambs of the flock apart.  And Abimelech said to Abraham, “What is the meaning of these seven/sheba ewe lambs which you have set apart?” 30 He said, “These seven/sheba ewe lambs you will take from my hand, that you may be a witness for me that I dug this well.”  31 Therefore that place was called Beer-sheba; because there both of them swore/shaba.  So they made a covenant at Beer-sheba (Well [of the] Oath).

In order to make a covenant, they had to swear (an) oath, shaba shebua.  As part of the oath, Abraham gave Abimelek seven/sheba sheep.  This ritually expresses not only the seven-ness, the Godness, the sacredness of the oath/shebua, but also its sufficiency/sabea and its fullness/soba; which are also aspects of God’s power & love.  That is, fewer than sheba would not have been a plenitude of sheep, and more than sheba would be cloying.

Years later, Jacob would agree to work seven years for Laban in order to marry his daughter Rachel.  That’s quite a seven to ratify a marriage covenant.

Centuries later Naaman the Syrian must immerse sheba times in the Jordan to wash away his leprosy.  Six times would not be what Lincoln might call the “full measure;” and if sheba washings cleaned Naaman’s disease, then why jump in an eighth time?  It’d be like Moses hitting the rock again: I trust ya God, but I just wanna make sure.  You know, in case you don’t get it done in one smack. Uh-huh.  And remember after the seventh dip, Naaman is converted, believes in Elisha’s God.

Now, let’s jump ahead to Jesus and his New Covenant, which had been anticipated by the likes of Jeremiah.  Before Good Friday, Jesus was physically accessible like the rest of us.  But after the Ascension, he wasn’t.  To maintain that connection to Jesus until he comes back, we have Sacraments, which maintain the fullness of the spiritual and physical aspects of that covenant relationship.  Based on the Old Testament precedents, and what Jesus and his apostles did in the New, it’s reasonable that the Church recognizes seven Sacraments.  And she does so not only through the numeric significance of sheba, but also in the complete oath-swearing covenental fullness and abundance of the s-b-a root.

So how does this apply to Wednesday Sunday School?  If my syllabus covered the Sacraments I’d be all set to use a simpler version of this post as an introduction; but it doesn’t.  But sometimes (ok, rarely) a lesson plan ends a few minutes early.  When it does, I like to have something new and useful to teach for those extra minutes, something self-contained, but which connects to other stuff. So I anticipate trying something like this:

“Hey look, we have three whole minutes left in class!  So can we get out early?  No indeed, classtime is valuable.  New topic: somebody tell me a word that rhymes with ‘shirt.’  Umm…skirt?  Yes.  How are shirt & skirt alike? They’re both clothes.  Yes…what do I hear with?  Umm, your ears?  Yes, I hear with my ear.  Y’all see how some words sound alike and have similar meanings?  Yes.  We only have a few words like that in English.

What language was Genesis first written in? Hebrew! Yes, good on you for remembering. Hebrew has lots of word families like shirt & skirt, ship & skiff, shin & skin. Let’s look at one. Y’all know the name Elizabeth? Yes. It’s Hebrew: El-i-sheba [on the board]. Remind me, the -el- means….God? Yes, good. And sheba means seven. What’s the big deal about seven? It’s God’s number. Yes.

Hebrew has a lot of words that are like sheba, seven. Say it: sheba. Sheba. Be fearless: sheba! Sheba! Good. Because seven is a holy number, when people like Abraham swore sacred oaths or made covenants, which are like….contracts! yes, they would swear on the holy number seven, make gifts of seven sheep, or work seven years before making a marriage covenant. The Hebrew words for swearing and oath are shaba and shebua, both very close to…sheba! yes, which means…seven! Yes.  So Elizabeth means ‘God is seven,’ but it also means God is holy, God is my oath, God is my covenant, God is abundant, things like that.

So tell me how many Sacraments are there?  Seven.  Yes.  And how many Gifts of the Holy Spirit?  Seven!  Yes, why seven?  Because that’s the holy number.  Yes, and because it’s a covenant-making number.  So when you receive a Sacrament, such as…Communion! yes, remember it’s one of the seven outward signs of the New Covenant; or as we’d say in Hebrew, one of the sheba signs of the New Shebua.

(At the top, Sarai Is Taken to Pharaoh’s Palace, by James Tissot)