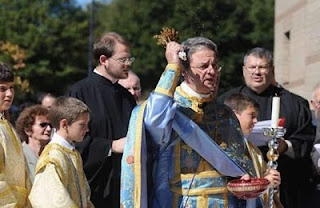 I was thinking about aspergillums this morning, the sprinklers used at Mass (and elsewhere) to disperse Holy Water.  I didn’t imagine the silver sticks with a ball on the end, but an old-fashioned aspergillum made of a plant.  The sort of thing Moses would have whipped up to sling blood on Israelites.  And I thought: wouldn’t a bundle of asparagus would make a fine aspergillum?  And then: could the words be related?  So let’s see.

Asparagus comes from Late Old English sparage, from Medieval Latin sparagus, from Latin asparagus, from Gk. asparagos, ασπάραγος,  from Persian asparag, meaning “sprout” or “shoot,” from the Proto-Indo-European stem -sphereg- “to scatter.”  (In England the word was commonly mispronounced as “sparrowgrass.”)

It’s amazing how sometimes a word remains recognizable across millennia, miles, and culture.

Aspergillum comes from Latin aspergere, [ad-spergere] “to sprinkle on,” from spargere, to scatter [also the root for disperse], from the same Proto-Indo-European stem -sphereg- “to scatter.”  So the words do come from a common root.  I doubt that anyone has ever grabbed a modern asparagus to sprinkle with, though; rather, an aspergillum was made by bundling whatever “sprouts or shoots” were handy. But look at this wild asparagus: 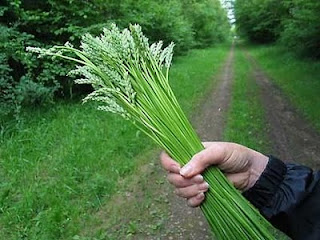 You could sprinkle a regiment with that fistful. (Kinda looks like wheat…imagine that.)

Then I wondered if the -sphereg- root was also the source for words such as spring and sprinkle, especially considering what an aspergillum is for. Turns out there are two close roots -sphereg-, and -spergh-. They both overlap in a general sense of sprinkling, scattering; and have some shades of meaning unique to each. To me, -spergh- seems to be the better root for asparagus, but my Indo-European reference says otherwise. Considering the alternate pronunciation and spelling of aspharagus which is as old as Greek, the difference may be academic anyway. I suppose both roots come from an earlier common source which would predate Indo-European; but it’s interesting to see that by 10,000 BC, give or take a millennia, that such fine distinctions in sound and meaning were already developing.