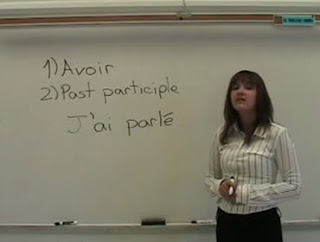 We review at the beginning of most classes, not more than 5 minutes. When reviewing, I always add some new information onto the reviewed material. Every little new tendril will reach out toward something else that will crop up later on.

For example, last week we covered some Bible basics and the first two chapters of Genesis:

“Hey y’all, let’s review a bit of what we learned last week: what are the two parts of the Bible? The Old Testament and the New Testament. Yes, what’s the difference? The Old Testament was before Jesus was born. [new stuff] Yes…we might say Before Christ, B.C. What’s B.C? It’s how we make dates before Jesus. Yes, and after B.C? Ummm, A.D.? What’s that mean? No guesses? It means Anno Domini; it’s Latin for “Year of (our) Lord.” So the O.T. corresponds to…B.C., yes, and the N.T. to A.D., yes, more or less.

[review] And the O.T. was written in what language? Jewish! Not quite…Hebrew! That’s it.  And the N.T.? Latin! No…? Greek! Yes, Greek. [new stuff] By the way, what’s the language of the Church? Latin? Yes, there you go. All the unusual words you’ll see this year are going to be Hebrew, Greek, or Latin. Sometimes you can guess the language by what I’m reading from.

[review] Somebody tell me about Adam’s rib. He misses his rib and wants her back! That’s right! [new stuff] How many ribs did God take from Adam? One. Yes…so how many wives should Adam have…three? Ha, no, one! Yes. God didn’t take a bunch of ribs for Adam to have a wife posse, just one rib. Now all of us men, and boys, who are future men, inherited that sense of missing something. Honorary son, let’s say God took your rib and made her out of it, and you over there, your rib became this girl, and my wife came from my rib. Now if you’re missing your rib, do you want his rib? Ha, no I want mine! Right. You don’t just want any rib…you want your rib. Well that’s how my wife is to me, not just a woman that God made, but what? The woman God made for you? Yes, just for me. I don’t want another woman any more than I want someone else’s rib.”

All of these new bits anticipate concepts that the kids will encounter later on.