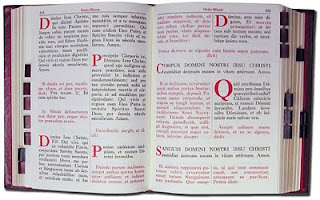 Can you read that? Me neither…”rational”…”tunic”…”holocausts”?…willya just speak English?
In 6th grade Wednesday Sunday School™ we spend 3 classes on the Mass, taught from the Missalette. The Mass quotes from the Bible extensively, and I expect the kids to recognize some of those instances, and figure out why they matter. Unfortunately, the current English translation of the Latin text isn’t reliably close to the ‘original’ 1970 Latin Mass, nor to the English of the New American Bible, which can make the Scriptural sources hard to figure out. For example, the children are taught the story of the Centurion. In the NAB, he says:  “Lord, I am not worthy to have you enter under my roof; only say the word and my servant will be healed.” But as we approach Communion in the Mass, we say: “Lord, I am not worthy to receive you, but only say the word and I shall be healed,” which is so paraphrased I have to coach the kids into seeing the connection. And I wonder: what’s the point of quoting Scripture if the quote can’t be recognized by the typical layperson at Mass? I assume the prior translators wanted a more accessible text for the peeps in the pews, even if there was a corresponding loss of meaning and Biblical context. But if 11-year-olds can and do rise to the occasion, then their elders should be able to manage as well…which reminds me of the KJV/ Douai Rheims translation brouhaha in the early 17th century.

Anyway, I’ve been periodically keeping up with news about the final text of the Roman Missal, Third Edition; what I’d call the New & Improved English Mass. I’ve hoped for a text which is closer to the Latin Mass and closer to Scripture, which makes the catechist’s job easier. For those who must know every detail, here’s the link to the approved revised text:

And for those who simply must access the 1970 Latin text (you know who you are) here it is:

Out of the blue on Saturday (8/21), I learned from the pulpit that our parish would be hosting a lecture on Sunday by Msgr. Bruce Harbert on the New Translation of the Roman Canon; he’s the executive director of ICEL (International Committee on English in the Liturgy), and superintended the translation. On Sunday his lecture covered the new translation in general, and specifically the first few lines of the Mass as examples. I was already familiar with the newly-revised Centurion’s quote and preferred it to what we have now, and during the Q&A I asked him to comment on that particular bit of revision.

The second line we have now is “Happy are those who are called to his supper.” The new Third Edition says “Blessed are those called to the supper of the Lamb,” which is closer to its source, Revelations 19:9. I would truly prefer “Blessed are those called to the wedding feast of the Lamb,” per the Bible verse, but the 1970 Latin text says ‘supper’ not ‘wedding feast’. So I’ll still have to do some explaining as we go from the Missalette to the Bible. I do wonder why the writers of the Latin text didn’t say ‘wedding feast,’ which is so much richer a concept than ‘supper,’ (Jesus marrying His Bride, the Church) but I wasn’t on the committee. Think supper; now think wedding feast. Which one seems Heavenly to you? Uh-huh.

Msgr. elaborated a bit on each, and why the new translation was better. Then he paused…and said, “Does this answer your question?” I responded that it was a bugaboo every year in Catechism class to teach that chunks of the Mass are taken from Scripture, but the quotes in Mass are so altered that it’s hard for the kids to make the connections without lots of explaining. The new translation will make my job easier. He then said that was really the point of the whole lecture: that the Third Edition will make the connection between the Mass and the Bible more explicit. As the meeting broke up, someone came over and said he had never realized that “Lord, I am not worthy to receive you, but only say the word and I shall be healed” was intended to recall the Centurion. Imagine that.

(As it turns out, these three lines that he discussed are the same three that get most of the attention in my Mass classes, per this link: MassDensity.)

There’s one other revision I’m aware of that will also make for better catechesis, which occurs in the Eucharistic prayer:

Currently: “Almighty God, we pray that your angel may take this sacrifice to your altar in heaven. Then, as we receive from this altar the sacred body and blood of your Son, let us be filled with every grace and blessing.”

New: “In humble prayer we ask you, almighty God: command that these gifts be borne by the hands of your holy Angel to your altar on high in the sight of your divine majesty, so that all of us who through this participation at the altar receive the most holy Body and Blood of your Son may be filled with every grace and heavenly blessing.” In this case I’ll be able to emphasize “participation.” And the new text is much more vivid, which helps 6th-graders if not jaded adults.

(More on this part of the Mass here: Samson&EucharisticPrayer#1)

So I’m happy with the Third Edition Mass, and will be using it this year in Wednesday Sunday School™. By the time it debuts in November 2011, the kids’ll be prepared, and may even explain some of it to their parents.