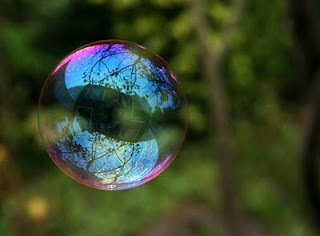 Sons’n’daughters, what’s this thing I’ve got here? A bubble-blower. Yep…I’m gonna blow one…phooo….isn’t that a purty thang. What’s in it? Air. Yes, but not just any old air. Suppose I smoked…..if  I take a big puff of my cigarette (my pencil), and blow another bubble, what’s in it? Smoke. Yes. The bubble has my breath in it, which isn’t the same as the air around the bubble. If I blew a big bubble full of smoke and it came down around your head, you’d breathe the smoke inside the bubble, not the clean air outside.  Suppose I blew one while I sucked on a breath mint? Then it would be minty inside. Yes.

I imagine that when people travel to places where the food, language and ummm, toilets are different from home, they like to travel in a bubble. Not a soap bubble, but an imaginary bubble made of familiar things from home: English, hamburgers, flush toilets. Once they get home what happens to that bubble? It pops! Yes. Bubbles don’t last.

Y’all remind me: could bad stuff happen to Adam & Eve in Eden? No! How about the animals in Eden: would a lion eat a lamb? No! Right again…and what was was the only stuff that could be eaten in Eden? They didn’t need to eat!  Well, that’s a good guess; listen to this bit from Genesis & try again: “God said, Behold, I have given you every plant-yielding seed which is upon the face of all the earth, and every tree with seed in its fruit; you shall have them for food.”  Plants! They could only eat plants and apples ‘n’ stuff. Yes, but how about the animals? Listen again: “And to every beast of the earth, and to every bird of the air, and to everything that creeps on the earth, everything that has the breath of life, I have given every green plant for food.” Animals had to eat plants too? Yes. There was no eating each other in Eden; just good things could happen: 24/7 pizza buffet, no going to bed early, beer for the grownups….anyway, life was perfect just being with God in Eden. Sometimes I imagine Eden as a Holy Bubble, where everything is perfect inside. But there’s an outside too, right? Yes, it’s where we are.  Yes…why’d Adam & Eve get thrown out? They sinned. Yes…did Eden disappear, was it ruined by sin? No, God made Adam and Eve leave. Yes and they took their sins along with them. And Eden was guarded by a monkey with a burning banana. It was an angel with a sword! Oh, right. Well, sin made a huge mess outside of the Holy Bubble. Was there death inside the Bubble? No! Outside the Bubble? Yes! Tornadoes in the Bubble? No! Outside? Yes! Diseases and deformities inside? No! Outside? Yes! All because of….sin! Yes. Yuck.

And maybe you can imagine Heaven as a huge Holy Bubble. No sin or bad stuff in there either.

Hey, what’s a wage? Huh? Wages, what are wages? Oh, money, what you get paid. Yeah, we might say wages are a consequence of working. Remind me, St. Paul said the wages of sin is….death! Yes, what’s that mean? That if you sin you die. Yes. Death, and every other bad thing, is a consequence of sin, as we know from the story of Adam & Eve. But babies can die, and they haven’t done anything wrong…how’s that work? They have Original Sin. Yes, we all share in the consequences of sin. Even cute little rabbits & lambs suffer the consequences of Sin, how? They can get eaten by other animals? Yes…remind me, can animals sin? No! And why not? They don’t have free will!  Yes. So if I sin, it doesn’t just affect me, it affects…everything?  Yes.

Hmm…d’y’all remember when Jesus healed the blind man? No we weren’t born yet! Oh that’s right, I forget how much older I am than you kiddies….who remembers the story? Yes, what happened? Jesus made some mud with spit and put it on his eyes and told him to wash it off. Yes. The man had been blind since he was born. Was it his fault, being blind? No, he couldn’t help it. Right…why was he blind? Because his eyes didn’t work. Yes, OK…but could he have been born blind in Eden, in the Holy Bubble? No! Ahh, and why not? Because there was no sin there! Yes. Could he be blind in the other Holy Bubble, Heaven? No! So a person can only be blind in a place where there is….sin. Yes.

Speaking of bubbles, here’s another one…phooo. OK…so? So, suppose this bubble is a Holy Bubble and no sin is inside it….isn’t that interesting? Not really. No? Well, suppose your finger had a bee-sting on it…no, a yellow-jacket sting, no, a snakebite, and it was killing you! If you could stick your finger in the Holy Bubble without popping it, what would happen? What? If you stuck your snakebit finger into the sinless Holy Bubble, what would happen? Umm, it would fix my finger? Maybe…why do you think it might? Because there’s no sin in it. Yes. Now, imagine you were blind; if I blew a head-sized Holy Bubble you might…stick my head in and fix my eyes!  And if you were paralyzed? Ha, I’d get in the big Holy Bubble and fix my whole body! Yes. Now, I’m old, I could drop dead any minute. Suppose I was very sick, but could pop into Heaven for just an instant, what might happen? You’d be better! Yes, because where there is no sin there’s no….bad stuff. Yes.

Let’s see…who can tell the story of the Paralytic? Me! Yes, tell it. They put him through the roof and Jesus made him better. Yes. Everyone expected Jesus to heal the man, that’s why they put him through the roof. Can you imagine the paralyzed man’s friends thinking, “let’s lower our paralyzed friend through the roof so Jesus will forgive his sins?” That sounds weird. But when he was plopped down in front of Jesus, did Jesus heal him right away? No, first he forgave his sins. Yes, that was a surprise! And then what did Jesus say? Get up and walk. And? And he got up and walked!  Yes. And we know that Jesus came to free us from…..sin? Yes, Jesus could forgive sins, take away sins. Tell me again, why do people die, get sick, have zits, all that bad stuff? Because of sin. Yes. Now, how exactly did Jesus make this man’s arms & legs start working all of a sudden? I don’t know, it’s just a miracle. Yes, but let’s think a bit. Did Jesus say, “I heal you from your paralysis”? What? Did Jesus first heal him physically? That’s what people were expecting, right? Yes. But what did Jesus heal first? Well he forgave his sins. Yes, what kind of healing is that? Huh? Is that physical healing, to have your sins forgiven? No, it’s spiritual, your soul. But then the guy could walk. Jesus was making a point: the man’s physical sickness was related to…his umm, spiritual sickness? Yes, genius, and spiritual sickness is called….sin!  Yes. But even if the paralytic got his sins fixed and also his body fixed, would he still die? Yes. Would he still sin? Yes. See on Earth, Holy Bubbles pop after a few seconds; they’re temporary. But the Heavenly Holy Bubble is permanent. Tell me about life in that Holy Bubble. You can’t die or sin and everything’s good forever. Yes.

Now I like to imagine when Jesus worked miracles he was creating sinless Holy Bubbles (not real bubbles) around people or things. Inside the Bubbles, Jesus could cancel out the “wages of sin,” the bad stuff that comes from sin. Or change things in ways we can’t in this sinful world. Think of some Holy Bubbles for me…no guesses? How about at the wedding at Cana? Umm…he made a Bubble to change the water into wine? Yes, good. How about at Mass? When the bread & wine change? Yes. C’mon think of some yourself. Umm, baptism? Yes. All the Sacraments occur in Holy Bubbles. Another? When Jesus was alive again at Easter? Yes…one more? How about with Moses? Oh, when he hit the rock! Yes. Anytime God does something miraculous, I imagine it happens in a Holy Bubble.

Hey, did God work any miracles in Eden? I don’t think so. And why not? Well, nothing was bad there. Yes, because there was no…sin!  Right, there’s no need to fix the bad effects of sin if there’s no sin.

So when you’re at Mass, or read about St Paul healing people, or hear about someone whose cancer just disappeared one day, don’t just think “it’s a miracle and I can’t understand it.” Think about how fixing people’s bodies is connected to…fixing their souls? Yes, and body’n’soul both need fixing because of…sin? Yes. And if it helps you, imagine Holy Bubbles.