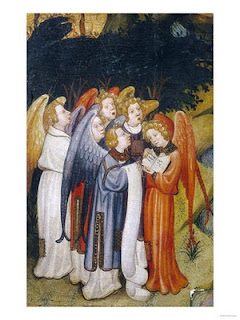 A constant Catholic theme in 6th Grade Wednesday Sunday School ™ is the relationship between Body & Soul, which naturally has everything to do with singing in church….right?

Occasionally I sing a bit in class (not more than a minute or so): Regina Coeli at Easter, Latin responses as part of our Mass classes, short stuff like that. I’m no great shakes as a singer, but it doesn’t matter. I tell the kids if I’m not afraid to sing alone in class that they shouldn’t be afraid to sing in church as part of the congregation. Singing is important; Catholics should sing.

“But I don’t like to sing! Everybody likes to sing; you’re probably just self-conscious. Don’t be. Once you get used to singing out loud you’ll like it. I used to be afraid too, but nobody really hears your individual voice in church. Do y’all know St. Augustine? No? St. Augustine lived about 1,500 years ago. His momma, St. Monica, prayed for 15 years that he would take God seriously. Eventually he did, and became a Doctor of the Church. A doctor? Not a like a medical doctor, a teacher. ‘Doctor’ is Latin for ‘teacher.’ Well why do we call a doctor a doctor then?  Ask me after class. So, St. Augustine was a great teacher. He taught that singing at Mass was important. One thing he gets credit for is the saying, “He who sings, prays twice.”

What’s that mean…”He who sings, prays twice?” No guesses? OK, let’s back up a little: why should anybody sing at all at Mass? Still no guesses…?

When we’re at Mass on earth what’s going on in heaven? They’re at Mass too! That’s right, at Mass heaven and earth are connected. Here’s a bit about the Heavenly Liturgy from that last book in the Bible which is called…? Revelations!  Yes. Revelations says, “four and twenty elders fell down before the Lamb, having every one of them harps, and…they sung a new song.”  So: why do we sing at Mass? Because they’re singing in heaven? Yes. When you’re at Mass and afraid to sing out loud, remember you’re singing along with everyone in heaven, not just the people around you.

Back to St. Augustine: “He who sings, prays twice.” What’s he mean? That if we sing with people in heaven we’re singing twice? Good guess, that’s not quite what I’m looking for.

What makes a hymn different from a song? Hymns are for church. Yes…but what if instead of singing a song, we all just read it? That’d be weird. Yes. Tell me, if you read something out loud and it rhymes, what is it? Oh…a poem? Yes. But if you read a hymn, what might that be? Well, a poem too? Mmm, sort of… usually in hymns we’re talking to somone, who? God? Yes. When you talk to God, what’s that called? Praying!  Yes! So a hymn is basically a prayer that you…sing!  Yes. So if you sing a hymn, then…you’re praying? Yes. But why would that be praying twice?

Tell me please, we are made of…a body and soul!  Yes, together they make a person. If I pray quietly, which of those parts are praying? The soul. Yes; the whole person isn’t praying, just the…soul. Yes. How could I get my body to pray too? Umm…pray out loud? Yeah…a little. Talking doesn’t really involve my body all that much. It’s pretty close to doing nothing. How about if you sing? Are any of you in the choir? I am. How do you feel after you sing for a whole Sunday Solemn Mass? I’m tired. But you’re just singing, not playing a sport. Why are you tired? It’s kind of hard to sing alot, I just get tired of breathing and stuff. Yes. And is your soul tired? No, my head and my lungs I guess get tired.  Yes, it takes real effort to sing out loud. What does the work of singing, your soul? No, my body. Yes. And tell me again, what’s a hymn? A prayer you sing. Yes. And when you quietly say a prayer, what part of you does it? My soul. And if you sing the prayer, what parts of you do that? Both parts! Which are….bodynsoul! Yes. So what does it mean: “He who sings, prays twice?” It means when you sing both parts are praying! Yes. So when you’re at Mass don’t pray with just your soul; pray twice by using your…? body, yes by using your body to…sing! Yes.