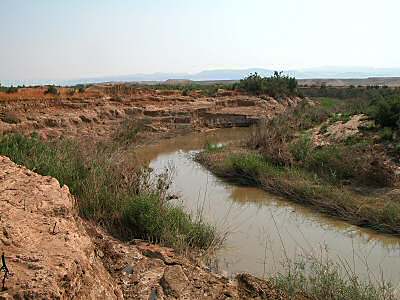 Look at this pic of the Jordan River. Wouldn’t you like to jump in that muddy thing?

When I remember my best teachers, Kindergarten through graduate school, I notice they all had something in common: none of them used the textbook during class. Some of my best teachers taught so well I barely needed to look at the book myself. Their classes were so interesting that to simply pay attention was to learn. I don’t know if they even had a copy of the book; I never saw them bring more than notes to class. Now, just because those teachers didn’t teach from the textbook, and I don’t teach from the textbook, doesn’t mean I don’t use a book in class. I do. I use the Bible.

Haven’t you all heard “use da Bible in ya class?” Of course you have. And you’d like to, but it’s not easy: read more than two lines out loud and eyes start glazing over. And it’s big & dense & disorganized & hard to know what the point is half of the time; isn’t there a shallow end to this pool? Can’t I just use the textbook and the Catechism? They’re sensibly organized, with an index & logical table of contents, written in regular English, y’know? They’re comfortable. They’re like other books I’ve read….normal books. They have the information I need. Just gimme the data.

But Fellow Catechists, if ya ain’t usin’ da Bible, ya missin’ da fun, and the kids miss out on seeing Catholicism spring from Scripture. Of course, getting started on the fun can be tough. Discussing how to use the Bible in the classroom will take more than one article, but for now let’s try a toe-dip in the shallow end.

Earlier this year we spent one class period on Baptism (it wasn’t enough time…must edit further). I treat the subject with a series of Bible stories & passages, so the kids can understand the Bible iceberg under the water that supports the Sacrament that we see poking up. One of the stories is the Cure of Naaman (I imagine most teacher’s manuals would reference it). I always forget where it is in the Old Testament, and I hate flipping pages. Here’s how I find it, and almost anything else I can’t find on my own.

1. I go here: https://www.biblegateway.com/keyword/ It’s a keyword search of the 66-book Protestant Bible. There are Catholic searchable 73-book Bibles, but they don’t let you limit the search to the Epistles, or Gospels, prophets, or even a single book.

2. I enter my phrase: Naaman. I pick my Bible version: King James Version.

3. In Options, I pick Limit Search to Old Testament, and click Search.

4. I get 14 hits. I see the story is in 2Kings 5. Now I go here https://www.usccb.org/nab/bible/index.shtml and here https://jmom.honlam.org/rsvce/ to see the chapter in two Catholic Bibles: the NAB, which is the American Bishops’ ‘official’ Bible; and the RSV-CE, a more stately translation. I also find 2Kings 5 in my paper NAB Bible, and selectively highlight the story. (Note: If I know where to find what I’m looking for, I just skip the keyword search and go straight to the Catholic Bibles.)

5. I decide to print an edited version of 2Kings 5. It’s better if the kids see me teach from the Bible itself, but the Baptism class has 11 passages, and that’s too much page-flipping while kids fidget. Here’s the edited version:

2 Kings 5: Now Naaman, captain of the host of the king of Syria, was a mighty man, but he was a leper. But Naaman’s wife had a slavegirl from Israel, who said the prophet Elisha could cure Naaman’s leprosy. So Naaman came with his horses and with his chariot, and stood at the door of the house of Elisha. Elisha sent a messenger unto him, saying, Go and wash in the Jordan river seven times, and you will be clean. Naaman was angry, saying, “I thought that he would surely come out to me, and wave his hand over the place, and cure me. The rivers of Damascus are better than all the waters of Israel. Could I not wash in them, and be clean?” So he turned and went away in a rage. But his servants said, “My father, if the prophet had told you to do something extraordinary, would you not have done it? All the more now, since he said to you, ‘Wash and be clean,’ you should do as he said.” So Naaman went down and plunged into the Jordan seven times. His flesh became again like the flesh of a little child, and he was clean.

And I add this concluding note to myself: Washing in water effects miraculous physical healing.

Cutting the text down this much does two things: it prevents me from reading the whole story aloud which doesn’t suit the kids (not the story, it’s great; too much reading aloud bores them), and many details aren’t relevant to Baptism. But it gives me enough text that I can read out loud a little. (You may want to look at 2Kings 5 just to see how much was cut.)

Here’s how this edited passage works in class:

“Hey, do y’all know what leprosy is? It’s a disease that eats up your body. Yes, your nose dies and falls off, your fingers & toes fall off, eventually you die. The Bible’s full of lepers that no-one wants to be around. Everyone was scared to death of touching a leper. But our subject isn’t leprosy…what’s the subject? Baptism. Yes. So this next Old Testament story about a leper is also about….? Baptism? Yes. The story starts off like this: “Now Naaman, captain of the host of the king of Syria, was…a mighty man, but he was a leper.” Naaman is a general in Syria, a country that still exists next to Israel. He’s got money, power, camels, iPods. But he’s caught leprosy, his lips and ears are falling off, and his wife won’t kiss him anymore.

“But Naaman’s wife had a slavegirl from Israel, who said the prophet Elisha could cure Naaman’s leprosy.”  So Naaman took a pile of money with him and traveled to Israel.  “So Naaman came with his horses and with his chariot, and stood at the door of the house of Elisha.”  Hey, old man in the shack, get out here! Don’t make me wait!  But “Elisha sent a messenger to him, saying, Go and wash in the Jordan river seven times…..and you will be clean.”  Naaman has a fit!  He says,”I thought that he would surely come out to me, and wave his hand over the place, and cure me.”  Naaman wants some respect!  Elisha should come out of his little hut and take care of business instead of handing out instructions to a general!  Seven times!?  And Naaman objects to having to bathe in that murky water: “The rivers of Damascus are better than all the waters of Israel.  Could I not wash in them, and be clean?”  So he turned and went away in a rage.”  This trip isn’t working out….who does this Elisha think he is?  Naaman’s puffed up like a frog, he ain’t doin’ nuthin’ stupid!  I guess he’d rather be a leper.  “But his servants said, “My father, if the prophet had told you to do something extraordinary, wouldn’t you do it?  All the more now, since he said to you, ‘Wash and be clean,’ you should do as he said.”  Alright!  Alright already!  “So Naaman went down and immersed himself (in Greek: baptized) into the Jordan seven times.”

“So what do you think happened?  He wasn’t a leper anymore!  That’s right! “His flesh became again like the flesh of a little child, and he was clean.”  So Naaman got himself some humility, did as he was told (everyone hates to do as they’re told) and his disease was miraculously washed away by the water. So what does this have to do with Baptism? It was a miracle with water! Yes, it foreshadows Baptism.

Trick question #2: Naaman’s leprosy was washed away; were Naaman’s sins washed away? Ummm, no? No, they weren’t. Jesus hadn’t been born yet, so there were no Sacraments. No spiritual cleansing for Naaman. By the way, what river did Naaman immerse (or baptize) himself in? The Jordan. Yeah. Remember the guy named John who baptized people, what’s he called? Ha, John the Baptist! Yes, what river did he baptize in? The same one, the Jordan! Yes…imagine that. We’ll get to John in a few minutes, but first, Ezekiel has something prophetic to say about Baptism (and we proceed to Ezekiel).

That wasn’t too bad, was it? Some reading, some telling, some acting, some questions, some answers.

And maybe some fun, and some learning.