I’ve been a fan of the Youcat since it came out a few years ago during World Youth Day in Madrid.

In fact, I was so inspired by it that I stopped using the textbooks and started relying on it as one of the 3 essential texts of my classrooms. 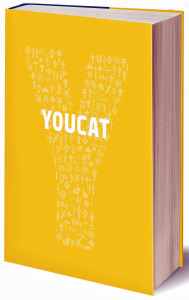 The Youcat is approachable in its design and its content. Whether they’re 5th graders or Confirmation classes, every kid in every class I’ve had has “gotten” the little flipbook aspect at the bottom that adults rarely even notice.

While that’s not really a selling point for its content, it does speak to the fact that this book is designed with youth in mind. And that makes it a resource that catechists can turn to.

I’ve written my rave reviews of the Youcat in other places, so check those out if you’re not sure about it: commentary about our Confirmation Boot Camp at my blog and reasons I started using it at CatholicMom.com).

I think you could use it for classes as young as 4th grade and all the way up to adult (or, as I like to think of myself, “older than young youth”).

Much of the beginning part of my own preparation to teach has to do with learning the topic myself, or at least learning it well enough to teach it. To that end, I used to read the material provided in the textbooks. Now I start with the Youcat and follow the references it presents to the Catechism and the Bible.

2. Answer the question as part of your class discussion.

There are times that students have questions about topics. Sometimes they’re not brave enough to ask the question (i.e., “What about gay marriage?” or “Is divorce okay, then?”) or don’t really know how to formulate it. Because the Youcat is a Q&A format, it gives you a way to bring up discussion points and maybe even get the kids talking.

3. Use it as an organizational tool.

Our religious education year is organized around the four pillars of the Catechism, and so is the Youcat, so it fits very nicely with the topics we already have lined up. For Confirmation, we use a different timeline, and the Youcat gives us a starting place for organizing our classes and topics. Whether you’re looking at it for a class or for the whole year, it can be a guide for you.

Do you use the Youcat? I’d love to hear how others use it in their classes!

The YOUCAT (Youth Catechism of the Catholic Church) isn’t perfect.

If you are looking for a textbook to use with your devoutly orthodox teenager, this may not be for you.

What this book is great at, in my opinion, is putting Catholic teaching into plain English for young adults who may never have encountered the Church outside of the negative media coverage and “transgressive” artists like Lady GaGa. This book speaks to the culture at a time when the Church is deeply counter-cultural. It’s been argued that this means some difficult teachings are couched in language too fuzzy to convey the seriousness of sin. I can see that, but I also think the intention behind the YOUCAT is that it can be tucked into a back pocket and pulled out during a casual discussion with a friend who may have questions about Catholics – not that it function as the-only-catechism-you’ll-ever-need.

With any text that’s designed “for the youth,” there’s always a risk of pandering to the reader in an attempt to make the text stylistically appealing. I think the YOUCAT gets it just about right. You can check out pdf sample pages via the Ignatius Press website; the font choices, size, and feel of the book are modern and attention-grabbing without coming across as cheesy or soon-to-be-dated. I love the winsome stick figure illustrations at the bottom of each page (hint: it’s a catechism AND a flipbook) that draw the reader’s eye to focus on the meaning behind the text. The book is small enough to be portable while still dense with information.

So, why another version of the catechism just For The Youth? Well, that was my original question, but I think this book definitely meets a need. It succinctly explains essential Catholic teaching in a manner that is accurate but not too wordy, and it provides the relevant Scripture references and citations in the official Catechism of the Catholic Church. The margins offer clarification of definitions and quotes from Scripture, the Catechism, and the lives of spiritual leaders throughout our history as a church. In the past, I’ve used the United States Catholic Catechism for Adults as a classroom text with high school students, and while it was more readable than the official Catechism, I would use the YOUCAT instead, given the opportunity. It’s not that the lingo is hip-for-the-teenz or anything, but its tone and conciseness are just a bit more appropriate for young people.

I was particularly impressed by Pope Benedict’s foreword, which speaks forthrightly to the hearts of to young people.

You need God’s help if your faith is not going to dry up like a dewdrop in the sun, if you want to resist the blandishments of consumerism, if your love is not to drown in pornography, if you are not going to betray the weak and leave the vulnerable helpless.

And hear how directly he addresses the pedophilia crisis and the impact it may have on evangelization:

You all know how deeply the community of faith has been wounded recently through the attacks of the evil one, through the penetration of sin itself into the interior, yes, into the heart of the Church. Do not make that an excuse to flee from the face of God! You yourselves are the Body of Christ, the Church! Bring the undiminished fire of your love into this Church whose countenance has so often been disfigured by man.

The layout of the book feels very “Internet.” There are little arrows next to major terms that feel like they should be hyperlinks; I would love it if this were eventually available in a pumped-up e-book form or if there were a web version of the text that allowed for users to click around from one section to another or learn more about the saints and Biblical figures quoted.

Having said that, there are problems with the book – there are a few photographs that are inappropriate (or, in the case of one photo with a random hand gesture, possibly offensive in some cultures). The primary controversy about the book has dealt with its treatment of sexual sin, specifically masturbation and homosexual acts. My personal opinion is that these sections are written such that a reader who disagrees with the Church and doesn’t know the background to these teachings will not instantly be put off by a “these are mortal sins, end of story” response. I think they could have been written better, but I don’t think they are so vague as to leave the reader unclear about Catholic teaching. To me, this book seems very focused on initiating a conversation with young people – Catholic or not – and some of the Church’s more countercultural teachings are presented in a “it’s difficult for people to understand why the Church teaches such-and-such” manner.

So, again, it’s not for everybody. But the orthodoxy of a book itself can be bolstered or hindered by the person leading the discussion. I’ve sat in on classes with super-orthodox texts which were presented as “okay, that’s what the Church says, now what do you think? Let’s talk about our feelings.” On the flip side, a person could easily clarify in a conversation the parts of the YOUCAT that may, to some readers, seem unnecessarily vague. I feel like the positives of this text outweigh the negatives, but I do look forward to a revised version that addresses these concerns.

Bottom line, I wouldn’t “not recommend” it – I’d just say that you should consider the reader before purchasing it.

Some parts of this review are consolidated from earlier blog posts about the YOUCAT. I wrote this review of YOUCAT for the free Catholic Book review program, created by Aquinas and More Catholic Goods, your source for Baptism Gifts and Oplatki Christmas Wafers. You can read more about Aquinas and More’s decision to stop carrying the YOUCAT here.