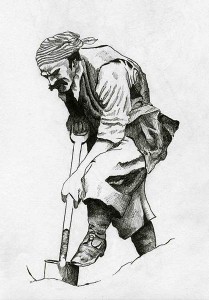 The Vanderbilts were once America’s house of royalty built on wealth and opulence. Cornelius Vanderbilt carved out one of the greatest rises from poverty to extreme wealth and power in the history of the world, turning a simple idea of transporting customers across a river into a magnificent railroad and steamboat industry.  Vanderbilt urged that the bulk of the family fortune be endowed with one descendant, and so he gave that bulk to his son William who, upon inheriting 87% of the fortune, doubled the family’s wealth before his death.

William, or Billy as he was known, did not follow his father’s sage advice and proceeded to divide his fortune between his two sons. Thus began a division and dilution of the family’s wealth down through subsequent generations, exposing what had been gained to the variations and fluctuations of individual vice, greed, superficiality, vanity, and irresponsibility.  Very often, absurd expenses were directed at keeping up the appearances which the family had built.  Increasingly, these appearances were merely a façade concealing a collapsing example of the wise words uttered by Cornelius to his son Billy:

“Any fool can make a fortune; it takes a man of brains to hold onto it,”

While I am not sure that a fool can make a fortune, I guess that Cornelius was trying to teach Billy that a treasure grown through hard work and ingenuity can just as easily be lost if not handled with intelligence and foresight.

Surely, the Vanderbilt family has its share of accomplished individuals, and various members of the clan did engage in considerable philanthropy.  However, the core lesson of the Vanderbilt Family is of a fortune won and dispersed,  and of a treasure amassed and diluted.  This tragic tale stands as a lesson of what can be lost when we lose sight of what really matters, as well as when we confuse earning something with being entitled to it from the start.

What does any of this have to do with salvation, and with following Christ?  I believe a lot.

Replace the monetary fortune Cornelius amassed with the eternal fortune which Christ has gained for each of us, should we be willing to follow His example and guidance.  Do we concentrate the gifts that God has given each of us on bringing glory to God and serving Him as well as others?  On the contrary, do we disperse and dilute those gifts trying to serve God and ourselves, our whims and our superficial desires, and our scores of earthly wants rather than our core eternal needs?

The more we disperse and dilute our efforts between the many false promises of this world and what really matters to our eternal destiny, the less focused we will be on what really matters and, more importantly, on Who really matters, starting, of course, with God.  The more our agenda reads like a personal bucket list, the less room and time will be spent on filling our hands with good deeds for others. Worry more about where you will go when you kick the bucket rather than compiling an earthly bucket list.

Let us then apply the earthly lesson of the Vanderbilt Family to the eternal lesson of serving the Family of God.  We may begin by thanking God Almighty for the many gifts He has given us.  We may follow that up with asking God to help us find the ways we can apply those gifts to serve Him and others.  We can continually review our words and actions to maintain our focus on bringing glory to God, as well as serving as His hands, eyes, feet, voice, and heart in a world which needs Him so much.