This year so far is the best year I’ve had catechizing 6th grade, which is saying a lot, since even the worst year (which I clearly remember) was still a good year. The kids and I have become a little family, laughing, learning, anticipating, finishing other people’s sentences. It’s like sitting around the dinner table and the topic of lively conversation is always Jesus and his Church. The last two classes were like group flow-states, if that’s possible. The kids believe in themselves, partly because they know I believe in them and love them like my own children. Every Wednesday night we hit the ground running, and they are fearless thinkers, knowing that even a fabulously wrong answer can still be a good answer.

Last class we were discussing this Annunciation, and how aspects of both Church and Temple are present in the building. The kids can relate new stuff to old stuff on the fly, and one of them asked if there had been a Shekhinah cloud over the Temple, as there had been over the Meeting Tent. 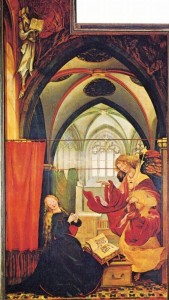 Panel from the Isenheim Altarpiece
.

“Huh…maybe as long as it contained the Ark; y’all may remember that the Ark was gone by the time Mary was born. But there’s a Glory Cloud in the painting. I see it!  Yes! And in the cloud? The dove, the Holy Spirit!  Yes! But is it overshadowing the Ark? No, Mary!  Yes, because…Jesus is in her?  Yes, as of that very moment when the both Holy Spirit and Glory Cloud overshadow her. Yes, what? Is there a Shekhinah in church?  Uhh…never thought about it. I guess not. Well, maybe it’s there but we can’t see it because of sin (being blinded or veiled by sin is a standard idea). Wow, you could be right! There’s all sorts of glory and saints and angels at Mass with us, so I wouldn’t be surprised if the whole church (arms waving around) might be lit like the sun with God’s presence. It might be like visions Isaiah and Daniel had (they know them). Wow. We’ll get to some of that later this year.” And then we continued to discuss the painting.

I know this vignette is a small thing, but for that weekly hour of class we hover on the cusp of Heaven. This is my life. As the song says, God Has Been So Good to Me.