Author’s note: This article is meant to provide guidance in situations when there is a legitimate request to receive Confirmation younger than the parish norm. 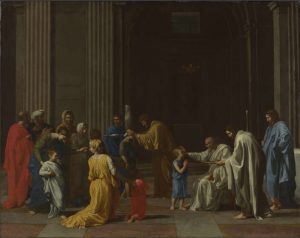 Baptism, Confirmation, and Holy Communion comprise the Sacraments of Initiation. “The holy Eucharist completes Christian initiation” (CCC 1322). Yet, most parishes operate with First Holy Communion received around second grade and Confirmation sometime during the teenage years. There is often a custom in place, and families are aware that by a certain grade Confirmation classes begin. Yet, what should we do when a younger child requests to receive Confirmation? Can we automatically send them away until they are nearer the age as everyone else? No, we cannot.

The Age of Confirmation

First, we need to be clear that Confirmation is not a mature affirmation of the faith (CLICK HERE for details). That is not a Catholic idea but something more common to the Lutheran and Methodist theologies. You will not find it in the Catechism or Church Documents.

When I was in my twenties, my wife and I would travel to join a Melkite Catholic Mission for Sunday Divine Liturgy (Mass). It was Catholic but a beautiful and mysterious side of the Church that was new to us. These Catholics, Eastern Rite Catholics, assembled early for one particular Sunday as the Patriarch was visiting and celebrating a Baptism. To my surprise, it was not merely Baptism but all three Sacraments of Initiation that were given to this infant. Giving Confirmation to this infant was not only their tradition since ancient times but also approved by the Church; it was Catholic (CCC 1318, Eastern Canon Law 695).

I never transferred canonical status to be an Eastern Catholic; I am still a Roman Rite Catholic. In our Code of Canon Law, it stipulates that a child in danger of death is to be Baptized and Confirmed (Canon Law 891). There are even several dioceses within the United States that administer Confirmation around second grade in order for the sacraments to be received in their ideal order. This means that Confirmation, to be truly Catholic, cannot be falsely associated with a rite of passage into maturity/young adulthood.

Outside the situations of being an Eastern Catholic, in danger of death, or belonging to one of these dioceses that confirms younger children, what is the minimum age and basic requirements for being Confirmed? The Code of Canon Law, linked above, offers the following:

We may be tricked into asking ourselves, “How can a seven-year-old truly understand the meaning of Confirmation?” When we are tempted to ask such a question, we should ask another: “Is Confirmation more complicated than the Church’s teaching on the Most Holy Eucharist, the source and summit of the faith?”

What about the diocesan age for Confirmation?

To be fair, the Code of Canon Law does stipulate some ability for a bishop(s) to determine an age for the reception of Confirmation (Can. 891). I am no expert in Canon Law (not at all!) so I will not comment on the exact nature of that ability.

Local churches can seek clarification from Rome on issues of uncertainty; this is called the submission of a Dubium (CLICK HERE TO LEARN MORE). The Vatican will often respond in a very short and to the point response. A response was offered in 1999 to a Dubium seeking clarification on what to do when a younger child requests Confirmation prior to the normative practice of a diocese. This response was not short, as was normative, but rather Rome saw “it necessary to respond in some detail” (CLICK HERE to read it). Here is a lengthy quote from the clarification:

In regard to Your Excellency’s second point, while it is clear that the Diocesan Policy is within the right inherent in the law in light of the complementary legislation for the Conference of Bishops to which you belong for can. 891, it is also clear that any such complementary legislation must always be interpreted in accord with the general norm of law. As has been stated before, the Code of Canon Law legislates that Sacred Ministers may not deny the Sacraments to those who opportunely ask for them, are properly disposed and are not prohibited by law from receiving them (cf. can. 843 §1). Since it has been demonstrated that the girl possesses these requisite qualities, any other considerations, even those contained in the Diocesan Policy, need to be understood in subordination to the general norms governing the reception of the Sacraments.

The Congregation considers it useful to point out that it is the role of the parents as the primary educators of their children and then of the Sacred Pastors to see that candidates for the reception of the Sacrament of Confirmation are properly instructed to receive the Sacrament and come to it at the opportune time (cf. can. 890). Consequently, when a member of the faithful wishes to receive this Sacrament, even though not satisfying one or more elements of the local legislation (e.g., being younger than the designated age for administration of the Sacrament), those elements must give way to the fundamental right of the faithful to receive the Sacraments. Indeed, the longer the conferral of the Sacrament is delayed after the age of reason, the greater will be the number of candidates who are prepared for its reception but are deprived of its grace for a considerable period of time.

In conclusion, this Congregation for Divine Worship must insist, given the concrete circumstances of the case under consideration, that the opportunity to receive the Sacrament of Confirmation be extended to the girl as soon as is conveniently possible.

It is clear that we do not have the ability to turn away a legitimate request from a seven, nine or eleven year old for the reception of Confirmation simply because they are younger than the routine of our parish or diocese. There are deeper questions to be asked. For starters, what then should we do if we receive such a legitimate request?

Responding to the Request

Parents and children in this situation should be affirmed for their faithfulness and Holy Spirit-filled zeal. A smile and tone of affirmation is a must, even if we do not yet fully understand the situation. We then must be sure they are already Baptized and of the minimum age or higher. At some point, the pastor must get involved in the conversation. Creatively we, or the pastor, need to ask the kind of questions that help us to know of their ability to renew their baptismal promises:

This can be done in an interview, during class, or through another means. We must also provide the opportunity for the child to learn about Confirmation, or assist the parents in their ministry to teach the meaning of Confirmation to their child, and then later see if the child can answer these questions for the pastor or his delegate:

Although some or all of this may be done by the pastor, the rest is for the pastor to oversee as we accompany them as their advocate throughout the process. Additionally, we can assist the child after Confirmation by giving them opportunities to continue to learn about their faith and to live it out by sharing it with others. It is important throughout the process, when speaking with the family or other parishioners, that we do not treat this child as odd but rather as Catholic and a part of our parish family.

The image was made available via Wikimedia commons. 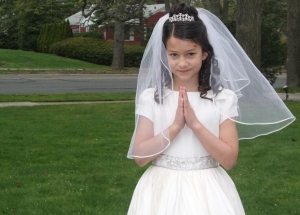 Catechizing doesn’t have to stay within classroom walls, as Cyndi Marlow, Coordinator of Children’s Faith Formation at St. Gabriel the Archangel Church, well knows. Kids learn better with strong parental involvement, and teaching kids often means teaching their parents, too. So Cyndi keeps the parents informed and up to date by occasionally emailing them articles and blogposts. After reading my blogpost on my fourth child’s First Communion, Cyndi decided she had to share the post with the parents whose kids were being prepared for First Holy Communion. Cyndi told me:

This arrived with perfect timing. … I work with families of children preparing and so many times I witness that they have put their focus on the dress, the party, the cake, the photographer, etc, even putting the focus on the children having a pageant like experience….I love this paragraph [of your post] “Because when you take away the pretty dress and the pretty hair, the veil, the crown, the gloves, and the festivities, what’s behind it all is Jesus. At First Communion, we’re not celebrating our children so much as we’re celebrating him — the God of Love who took flesh and blood in order to bring us eternal life. Our eyes and our hearts should be turned to him.”  AMEN!!!

Scabbed heads, burned faces, and stomach viruses might not seem like a lucky start to my fourth child Marguerite’s First Communion day. Poor Marguerite tripped over the curb at school a few days before her First Communion and went flying up, up, up, and then down onto the pavement. Scabbed knees, scabbed hands, but the worst was a big scab on her forehead right by her hairline. Not the best for close-up shots.Then there was my husband’s burned face. He got scalded in the shower (horrible, I know — how did that happen?), and the entire left side of his face was covered by a reddish-purplish burn. To disguise it, we had to decide between a Phantom of the Opera style mask, a Middle Eastern veil, or Loreal True Match foundation. We went with the foundation. The whole unfortunate event reminded my husband of the time in high school that he let his brother Tony cut his hair.

Left with a bald spot in the back of his head, my husband colored it in with a black magic marker so no one would notice. See the parallels? But I digress. 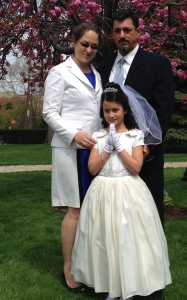 The wonders of modern make-up

Finally, there was the matter of my younger daughter Cecilia’s stomach virus. I’ll spare you the gory details, but they were — gory. None of the guests invited to the First Communion party was willing to set foot in the house plagued by such an unpleasant virus.

My mother-in-law mourned the absence of a full-scale shindig like we had for our other children’s First Communions. It doesn’t matter, I told my mother-in-law, Marguerite will have a party with Jesus. Because when you take away the pretty dress and the pretty hair, the veil, the crown, the gloves, and the festivities, what’s behind it all is Jesus. At First Communion, we’re not celebrating our children so much as we’re celebrating him — the God of Love who took flesh and blood in order to bring us eternal life. Our eyes and our hearts should be turned to him.

So we might not have been able to bring Marguerite to his altar without blemish or spot (Eph. 5:27). We might not have been able to bring ourselves that way either. But all the minor calamity took our minds off of what we were bringing Jesus and made us focus on what he was giving us — freely, undeservedly, despite our inner and outer flaws, and despite the masks we wore to cover them. We cannot possibly merit the gift of God sacrificing himself for us on the altar or on Calvary so many centuries ago. We can only receive it with humility and devotion. Realizing the enormity of God’s gift in the Eucharist is what made Marguerite’s First Communion the luckiest — the most blessed — of all. 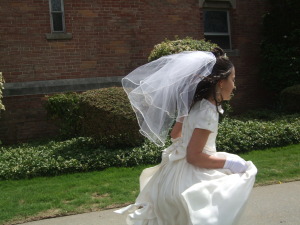