Malcolm Muggeridge was an English controversialist and journalist whose life spanned just about the entirety of the twentieth century – he was born in 1903 and died in 1990. He was first an agnostic and then later on became a Catholic – a deeply committed Roman Catholic at that. His conversion was hastened along by the witness of an Albanian-born nun by the name of Mother Teresa of Calcutta, who even before her death in 1997 was regarded as a living saint. Muggeridge was so moved by the founder of the Missionaries of Charity that he decided to make a film about her in the late 1960s so the rest of the world could come to know what he had discovered in this very holy woman.

After he finished making the film, Muggeridge was at a loss as to the title he would give it. While reading through a piece of correspondence from Mother Teresa, he found the right words to capture the vision he had brought to the big screen. Mother Teresa had written: Let us do something beautiful for God. There it was – Something Beautiful for God – that’s what he would call his film. 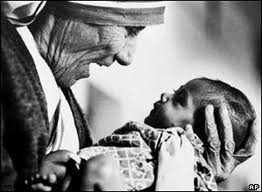 In my view, he could just as easily have titled his film Someone Beautiful for God – although Mother Teresa would not have liked it. She was much too modest to accept this kind of designation about herself. Her focus was always on the work she was doing for God; it was never on herself. In fact, she would have regarded the personal attention as a betrayal of her service to the poor, as something not in keeping with the humility we should have about ourselves in imitation of Christ.

In today’s first reading, the sacred author describes for us the solemn dedication and consecration of the temple in Jerusalem. We hear in the text how the ark of the covenant is carried forward in procession by the priests and Levites. (cf. 1 Kgs 8:4) We can just imagine the precision and exactness it required on the part of the Lord’s ministers. In this dedication and consecration, a column of smoke fills the temple, indicating the presence of the Lord’s glory. (cf. 1 Kgs 8:10) How majestic a sight this must have been to set your eyes on! It’s no wonder that Solomon, addressing the Lord of glory, cries out, “I have truly built you a princely house.” (1 Kgs 8:13) Solomon was no doubt wise, but modest he was not!

The temple was something beautiful for God with all its gold, silver and precious metals. But was it the most beautiful thing of all?
Early on in Jesus’ public ministry, Saint John the evangelist has Jesus in the holy city of Jerusalem, in its temple area where he finds moneychangers and drives them out of His Father’s house. (cf. Jn 2:14-15) Overturning their tables in an act of righteous indignation, Jesus boldly proclaims at the same time, “Destroy this temple and in three days I will raise it up.” (Jn 2:19) The evangelist informs us just two lines later that Jesus “was speaking about the temple of his body.” (Jn 2:21)

In today’s gospel, the evangelist records how Jesus ministered to the sick. Wherever Our Lord visits – whether villages, towns or the countryside – the sick on mats are brought to Him. (cf. Mk 6:56) All they want to do is touch the tassel of His cloak; and Jesus of course obliges their request. (cf. Mk 6:56) These sick people are unable to walk; their legs and presumably other parts of their bodies are severely compromised. Saint Mark indicates very simply at the end of the text that these sick men and women are healed of their infirmities. (cf. Mk 6:56)

There is a story told about Saint Lawrence the Martyr, the third century deacon in Rome and it goes like this: Lawrence, the servant of the Lord and His people, is instructed to produce the most coveted and most valuable possessions belonging to the fledgling and persecuted Christian community in the Eternal City. Instead of bringing forward the most precious sacred vessels used at the liturgy, the deacon presents the lame, the crippled, those whose bodies are racked with pain. These are the ones who are beautiful for God!

We are still a few weeks away from the beginning of Lent and we have an even longer distance to cover liturgically before we get to Holy Week. Still, I do not think it imprudent to invoke an image from that penitential season now. Jesus is the Suffering Servant. He is the One of whom Isaiah prophesied long ago: “There was in him no stately bearing to make us look at him, nor appearance that would attract us to him . . . . One of those from whom men hide their faces, spurned.” (Is 53:2-3) There was no beauty there, or so it seemed.

Father Richard John Neuhaus, the founding editor of the journal First Things, once preached the Seven Last Words of Christ devotion in New York City and turned his reflections on that occasion into a volume entitled Death on a Friday Afternoon. He referred to Jesus’ death there as a dreadful beauty – something physically repugnant yet spiritually and morally splendiferous at the same time. In going to the Cross obediently, Jesus did something beautiful for God. Through His humility, He showed Himself as Someone Beautiful for God. So might we turn our own lives into something beautiful for God, and thereby become someone beautiful for God by choosing not the way of self-fulfillment but self-abandonment.