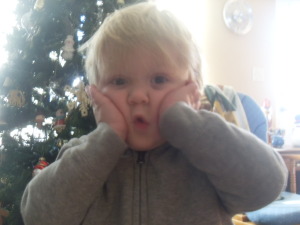 We are never too young for God to call us.

As a young adult I was pretty sure about the calling God had in my life. I met the girl that I would end up marrying and knew we would raise a family. I thought about religious life but had a longing for a family. I look at my life now with a beautiful bride, two amazing sons, and another child on the way and feel confident that I chose the vocation that God wanted for me.

When my sons were born I immediately assumed that becoming a grandfather and having grandchildren would be in the cards for my life. However, as a strong Catholic I wondered if God may want to make priests of my sons. This was a difficult thought for me, and took a while for the reality that I need to let go of what our world expects of us.

The thought of going into the priesthood or other religious life has a negative view in our society today. I’m not only talking about the secular world, but even in the Catholic church. Why is this? I have been thinking about it and realized that as a child, becoming a priest was never brought up to me. If I wanted to be a priest it was going to have to be miraculous, and I would have to hear the call from God without the help of anyone. Children are often brought up thinking that being successful means to make money, and jobs like doctor, lawyer, and professional athlete or musician are the elite on the list. As catechists we know that being successful is not about money, but about doing what God is calling us to do and bringing people closer to Christ while doing it.

In my third grade class I love to talk about the saints. So many of our saints were so very young, St. Therese of Lisieux was elementary age when she wanted to join the Carmelites. St. Therese had sisters that chose religious life so she knew this was an option. I let my third graders know that we are never too young for God to call us. I encourage them and let them know how great religious life can be. Maybe none of my students will enter religious life, but they can’t say they didn’t know it was an option.

As you may have guessed I am open that God may use my sons as his instruments through religious life if he chooses. I now pray for my boys that they are open to the priesthood and religious life. They are only three and two years old and have a long while before they have to make any decision about this, but we are never to young for God to lay upon our hearts his calling for us.