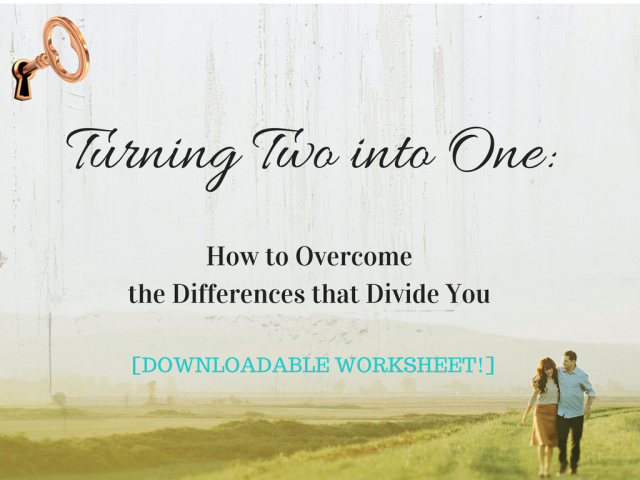 This printable personality differences worksheet is one of the most popular in the series from my Catholic marriage advice book The Four Keys to Everlasting Love. Please feel free to download, print, and share it widely. FOR THE PRINTABLE VERSION, CLICK HERE.

The worksheets are ideal for marriage prep or marriage enrichment, either in small groups or break-out sessions. They can also be used at home, of course, or together with the 4 Keys Online Book Club, which is covering Chapter One this week.

Turning Two into One:

How to Overcome the Differences that Divide You

Whether you’re newly engaged or long married, congratulations on embarking on the experience of a lifetime! Marriage is quite an adventure, and somehow never exactly what we expect. Our God, after all, is a God of surprises, as Pope Francis is fond of saying.

The first bump in the road that many couples encounter is overcoming personality differences. Opposites really do attract, and that adds to the excitement but can also create conflict. Manny and Karee were very different, as they explain in Chapter One of The Four Keys. When they met, Manny was a “first-generation Spanish American, longtime New Yorker, Catholic, Republican, extrovert, and optimist.” In contrast, Karee was “a Virginian born and bred Episcopalian, Southern Democrat, and introvert with a slight tendency toward gloom.” They overcame their differences through respectful debate and reliance on God who loved them both equally.

In Chapter One, Manny and Karee describe their courtship, the early years of their marriage, and their dramatic struggle through Manny’s four brain surgeries to remove recurring tumors. Along the way, they will show you how to:

You can use the following conversation starters to get a discussion going among yourselves or in a small group. If it helps, think it over on your own time, take it to prayer, and jot down your answers before talking about them.