Today, as we celebrate the gift of Life we pray in a special way for the unborn children who are vulnerable to the threat of abortion. We also lift up mothers who have suffered from abortion or who have been pressured to do so, and that the rights of women may be respected – including the right to give birth to their child and the right to raise their children in a safe environment. We also pray for those who are involved in abortion and any attacks on the dignity of life, that the Lord will open their eyes to the gift of their own lives and those around them. 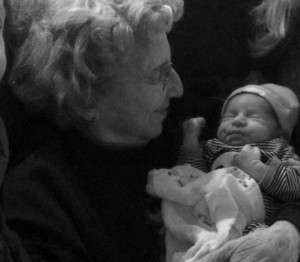 In today’s world we see so many attacks on life. We have heard most recently about the attacks on Christians in the Middle East and other atrocities. And even in our own country there are victims of trafficking, all kinds of abuse, domestic violence, euthanasia, mistreatment of the poor, the sick, and the disabled.

What can we do? What can I do? Where do we start and how can I even make a difference?

A simple answer came to me when I was visiting my family for the birth of my nephew. As I watched my sister, her husband, and their new son I was struck by the simplicity and the overwhelming beauty of life and love. I saw in the love of my sister and her husband the pouring out of the love of our 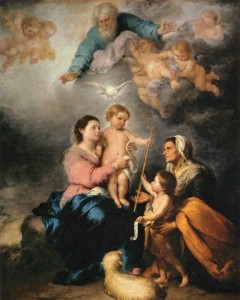 And if there could be so much love on earth, in one small hospital room, between three people…how much more does the love of God surround us? As my sister looked down at her son, just seconds old, the pain was now forgotten. Only he mattered. And she didn’t hold the pain against her precious little one. That pain only made her more in love with him, and the suffering only made him belong more intimately to her who had waited nine long months to hold him in her arms.

Isn’t this a reflection of the love of Jesus for all of us? After he poured himself out upon the Cross for us, he didn’t look at us with annoyance, shame, or guilt because we had “caused” him such pain. Rather, it only brought us closer to His Most Sacred Heart, and it only strengthened His love for each of us.

How precious must we be to God! How precious must you be to Him! Experiencing His love gives us the context to celebrate the gift of life and to reverence each life no matter the circumstance. Even the greatest sinner and those who commit acts of violence, even they are looked upon as precious, and they especially are deserving of our love and prayers. So must we dare to love! Without reservation and without counting the cost we love even those who have hurt us. We can love them because they too are children of God.

I realized the truth of each person’s preciousness in the Eyes of God and how close He keeps each of us to His Heart as I looked down upon my nephew, only a few minutes old. The Lord will never let go of us even when we feel abandoned and alone. For any of you who have felt that you have failed God, remember the mother who does not cease loving her child when he cries as an infant, or when he screams and has temper tantrums as a toddler, or when he gets in trouble or struggles with addiction as a teenager, or when he loses his job as an adult, or even if he fails to be there when she is dying. Her love is always and forever. 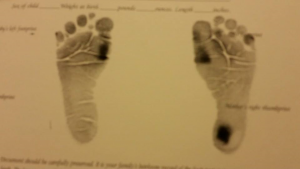 How much more then is the love of God, who loved us into being?

An Overview
To embrace the Catechism of the Catholic Church, we need to understand the basics, to see it as a whole before delving into specific subjects.  This article presents the Catechism’s basic 4-part format and helps you memorize it in ten minutes or less. Don’t worry, this will be fun… using a common nursery rhyme to do it.

The Catechism contains a prologue and four major parts. Those four parts break down into sections, articles, and numbered paragraphs. We’ll come back to the prologue after describing the four parts, also called “pillars.” (If the Catechism were a cathedral, these four pillars would uphold the weight of the entire structure.)

Here are the four parts of the Catechism using their official titles from the text (with my brief explanations in the parentheses):

Its okay if don’t remember the names of the four parts. Here’s a shorter list of four summary words to remember the content of four parts: beliefs, sacraments, life, and prayer.

Now for the memory task: You are about to be treated to how brilliantly, er, rather, how simply my mind works. (At my tender middle age, if I can conjure up mnemonic devices to trigger my recall of certain subject matter, so much the better! My apologies to the more sophisticated minds among us.)

Start with the names given to your hand’s thumb and four fingers by the children’s nursery rhyme and finger game “Where is Thumbkin?” as sung to the tune of “Frère Jacques.”

Just how does this benefit our memory, you ask?

Better to know God first, rather than a million details about the Catechism.  So, thumbkin gives the first lesson: In the beginning…  there was God.

Thumbkin reminds us there is a prologue to the Catechism. In cosmic terms, HIS story came before our own story; God’s goodness brings us into existence and invites us into relationship. We find this out in the very first numbered paragraph of the Catechism’s Prologue:

God, infinitely perfect and blessed in himself, in a plan of sheer goodness freely created man to make him share in his own blessed life. For this reason, at every time and in every place, God draws close to man. He calls man to seek him, to know him, to love him with all his strength. He calls together all men, scattered and divided by sin, into the unity of his family, the Church. To accomplish this, when the fullness of time had come, God sent his Son as Redeemer and Savior. In his Son and through him, he invites men to become, in the Holy Spirit, his adopted children and thus heirs of his blessed life. [See Catechism, paragraph 1 or CCC 1.] [Emphasis mine.]

Our American culture gives thumbkin some familiar sign language: “thumbs up!” Thumbs up means “yes” or “it is good” or “I approve.” In spiritual terms—saying “yes” to God—indicates our positive direction: to be “heirs” of God’s “blessed life.” It can also remind us of the positive attitude we need to embrace the Catechism, and church teaching in general.

Finally, the thumb acts as a metaphor for the unity of Trinitarian content throughout the Catechism. The central Truth of theCatechism is the three Persons of the Holy Trinity and the life of love they share.  All other truths flows from that core. While the four fingers can and do touch one another in certain alignments or combinations, only the thumb most easily extends and flexes to the fingers and makes them function smoothly as a unit. Between the four parts of the Catechism, there is interconnectedness and overlap between certain doctrines, just like the four fingers on a hand. But, this central Trinitarian truth permeates and unifies all four parts, much like the thumb.  All of the Catechism makes sense with, in, and through the Trinity.

Where is pointer?
Pointer “points” to beliefs in Part One of the Catechism. Think of your index finger as pointing to the index, or list, of beliefs.

What is the first and primary listing of what the Church believes and professes?  The Creed! Based on the Trinity, the Creed’s twelve Articles of Faith shape the foundation of our Faith.

Another memory aid: first finger starts with “f” which stands for “faith”.  Or this: first finger = faith = foundation = beliefs.

Where is tall man?
When discussing “the middle finger” in American culture, one needs the innocence of a child. We’ll get there with the help of our nursery rhyme.

The middle finger, otherwise known as tall man in our rhyme, stands distinctively above the rest. Its tall placement is unique.

This second finger stands for the second part. Here’s how: What defining practice makes the Catholic Church unique and distinct in the eyes of the world? What makes Catholicism stand out among world religions? The sacraments.

Where is ring man?
Ring man, the third finger, commonly called the ring finger denotes Part Three of the Catechism, our life in Christ.

American culture identifies the ring finger as signifying to whom we may be betrothed or wed. For Catholics, it denotes vocations. In short, ring man proclaims our “life” to the world: the way we live our life of love.

Where is pinky?
You’ve got the idea by now… the fourth finger—pinky—stands for prayer, the fourth part. Both pinky and prayer start with the letter “p”, (and not to be confused in meaning with “pointer.”)

The pinky might seem a humble little finger… but certainly not the last nor least. Incidentally, Part Four on “Christian Prayer”, like pinky, is the Catechism’s smallest part.

If you cannot remember anything else about the Catechism, know that it contains a deep call to prayer in your life. Always put God first, even if you don’t know or understand the rest of the Catholic doctrines.

In coming before the Lord God each day in prayerful humility, you will hold more wisdom in your little pinky finger than an entire catechism could hold.

This article originally appeared at CatholicExchange.com.