In my confirmation class, I like to tell the kids stories to help them remember the truths they are learning.

When we learn about the Eucharist I tell them the story of St. Tarcisius and ask, “why would this young man die for Jesus if he was just carrying a piece of bread?”

When we talk about God the Father, I do a dramatic telling of the prodigal son to portray how much God loves each of us.

When I teach the students about final judgment I show a picture of Michelangelo’s Last Judgment. There are many exciting symbols and messages that you can point out to your students in this vibrant work of art. 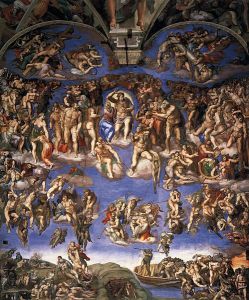 There was a young man in his twenties who had to care for his younger brothers and sisters because his parents had passed away.

This young man was always concerned about money and how he would feed his siblings.

One day he met a man who told him he could easily fix all his problems. The man was a thief and was planning a bank robbery. He had all the plans worked out, but he needed a get-away driver.

The young man was torn, he knew it was wrong, but because of his brothers and sisters he decided to help.

On the day of the robbery something went very wrong. The thief got into the get-away car with no money, but blood all over his hands. He had shot and killed a security guard.

Afraid of what would happen, the young man fled the state. He boarded a train going anywhere.

The young man, so filled with anguish and guilt, hadn’t even noticed that there was an older gentleman sitting next to him on the train.

The older gentleman softly asked, “son, what is troubling you?”

Knowing that the young man would never see this gentleman again, he decided to tell him the entire story.

The older gentleman listened with compassion. He then told the young man to get off at the next stop, turn himself in and tell the authorities the entire truth, just as he had told him. He gave the young man an encouraging look and told him to have faith that the judge would have mercy on him.

Although the young man was afraid, he got off at the next stop and turned himself in.

The young man went to jail and awaited his trial.

The point of this story is to show that at the end of our life we will be judged, but we have the opportunity to befriend the judge.

I encourage you to share this story in your catechism classes. You can adjust the details based on the age group.

I tried searching the web for a source for this story, but I couldn’t find one. If you know where this story originally came from, would you let me know? Also, let me know if I am missing any details. Feel free to fill them in.

What other stories do you have in your catechetical toolbox? What stories resonate best with little ones, teens or adults?