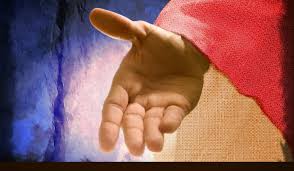 “For I know the plans that I have for you,” declares the LORD, “plans for welfare and not for calamity to give you a future and a hope.” Jeremiah 29:11

I once saw a painting of a man throwing his hands up in despair, eyes fixed on the sky in a mix of supplication and frustration. The image was jarring if only because it demonstrated the irony of faith.  On one hand, one demonstrates faith in believing that God can reach out and help.  On the other hand, however, that very same faith is immediately tested when God seems not to reach out at all, at least to one’s perception, expectation, and satisfaction.

The one who has no faith in God does not bother to even ask for help from Someone whose very existence is deemed a fanciful myth.  Such a person ultimately claims to have faith only in himself, and not much faith in anything else.  Eventually, such thinking ends in the total despair of firmly grasping on a falling tree limb.

The reach of Christ is an invitation to release that limb, either before it falls or, just as significantly, after.  Releasing the limb before its fall is the admission that the limb is a pathetic substitute for the firm grasp of a loving God.  Conversely, releasing it just after the fall is the admission that, when all else is lost, there will  still be a loving God’s reach.

The proud embrace their limb all the way down to the darkness of their own self-obsession.  The doubting face a worse fate, holding the falling limb with one hand while waving a questioning, free hand that is anything but free, trapped in its own ambivalence.

Divine Mercy is the promise that God’s reach will far outreach one’s own, so mired as it will usually be by a mixture of guilt, doubt, pride, and a desire for self-punishment.  We all grasp that limb for all of these reasons, yet God’s love constantly invites us to let go and grasp His Hand instead.

Even when we do reach out, do we hesitate as Peter did in the sea or do we go all in? Do we see God’s answer as our own, or are we truly open to let God answer our prayers His way?

Ultimately, faith is all about trusting that, regardless of how bleak and pathetic things may seem to us, God has a plan for us.  It is believing that we will get lost as God offers a roadmap back home. It is closing one’s eyes to the marketing of this world’s values and walking in God’s path as best we can.  Ironically, it is refusing to embrace the highs and the lows of this world too tightly, knowing that they merely represent the waves of a sea that only God can calm.

People constantly ask us if we have plans, for the summer, for the fall, for the holidays, for next year, and for the rest of our lives.  More and more, the closer we get to  God, the more our answer should be “Yes, but God is the one who has them.”