Yesterday morning I took the walk of shame down the side aisle of the Chapel, 5 minutes late and we were already at the Gospel. Frustrated and feeling confirmation that I was definitely a failure at absolutely everything if I couldn’t even make it to Mass on time, I then listened to the Gospel and underneath my gritted teeth felt a sense of relief and the first sign of a smile since yesterday. Having experienced a personal failure a week ago (joining the ranks of the unemployed), I felt comforted by the life and example of Peter.

In the Call of Peter in Mark’s Gospel, which we read yesterday, Jesus clarifies Peter’s vocation and asks him to leave behind what he thought defined him for a life of intimacy and trust in the Lord rather than in the success of the work of his hands.

Similarly, in Luke’s account of the Call of Peter, Jesus uses a moment of failure (on the part of Peter to provide fish after working all night) to reveal His identity as the Son of God while also challenging Peter to discover his own identity, not as a fisherman but as Jesus calls him in Matthew, Mark, and Luke, a “fisher of men.” John’s Gospel recounts a somewhat different, but not inconsistent, first encounter. Here Jesus also reveals to Peter (then Simon) his identity by renaming him Cephas (Peter). As we see in our scriptural pilgrimage, it takes Peter a while to really let go of what he thinks constitutes his identity, as well as his ideas of the Messiah and how His glory should be manifested. We see this when he fails to walk on water, when he rebukes Jesus for predicting his crucifixion, and when he denies Jesus three times.

He may have left behind his fisherman’s nets but there are still many figurative nets holding him back from receiving the truth of his identity as well as what it means to be an Apostle, probably because he is unable to believe the totality of Jesus’s identity which He holds unfolds (albeit sometimes cryptically) to Peter and the others.

So often we, too, link our accomplishments and the outcomes of our efforts to our identity so that, if and when they fail to measure up to our standards or those of others, we judge ourselves to be inadequate and are quickly overtaken by tidal waves of unworthiness. We assess ourselves by how productive work was, the number on the scale, the number of miles we ran, positive feedback, approval of others, or any other combination of worldly measures of success. It is not wrong that we have aspirations, but it is not true that these standards have any bearing on our identity and worthiness of God’s love and mercy. What are the “nets” we cling to for a sense of acceptance and worthiness that, although they may be part of our calling, are not essential to our identity? Do we need to put them down as Jesus instructs Peter in the Gospels of Mark and Matthew? Or do we need to trust in Jesus’s intercession and instruction as we see in Luke?

Do we struggle to put down these nets because we have a hard time believing in Jesus as truly God, as truly more powerful than our little mistakes or failures to “make something of ourselves?” Yes we can know the truth intellectually, but do we really believe in Jesus, in His power and authority over sin and death, and in the truth that our identity comes from Him rather than our accomplishments or lackthereof?

When Our Nothingness Encounters God’s Mercy 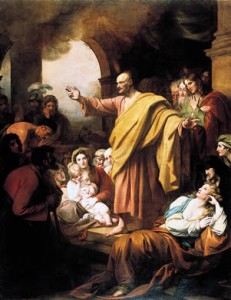 When we experience failure before the Lord we can become afraid and the shame we feel can be a barrier to further intimacy with him. But these encounters with our weaknesses are often the point of entry for the Lord, just as they were teaching moments and opportunities for Peter.

I think often of how ashamed Peter must have felt in Luke’s account of the Call of Peter. He would have felt a similar sense of failure throughout his journey with  Jesus, however, Jesus uses these opportunities to fill the emptiness in Peter’s heart with His light and truth, which Peter will more fully embrace at Pentecost.

Saint Therese’s thoughts on this passage, recorded in Divine Intimacy by Father Gabriel of Saint Mary Magdalene, give us a refreshing outlook on what Jesus can do with our failures. She writes, “Had the Apostle caught some small fish, perhaps our divine Master would not have, worked a miracle; but he had caught nothing, and so through the power and goodness of God his nets were soon filled with great fishes. Such is Our Lord’s way. He gives as God, with divine generosity, but He insists on humility of heart.” 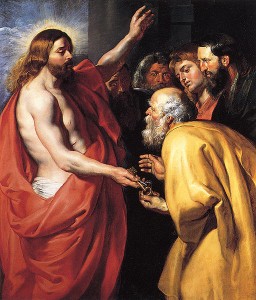 In her italics, Therese shows us the keys (no pun intended) to how Peter learned to follow the Lord. We will often find ourselves in the “nothing” stage. This is where the Lord’s grace is most efficacious. However, she warns that He “insists on humility of heart.” This means that we must, like Peter, let go of our fear of failure and put our whole trust in the Jesus and let him be Who He says He is, God!

Now imagine how Jesus looked at Peter in his moments of failure, for example, after a full night of reeling in net after net of nothing. Or when Jesus, after His Resurrection asks Peter if he loves Him. His gaze must have been quite the opposite of Peter’s inward gaze of self-judgment, which actually distorts his perception of how Jesus sees him.

As was the case with Peter, Jesus looks upon our failures with mercy, not with shame, impatience, disgust, etc. He may not immediately reveal His glory in our failures, that usually takes time. We may not reel in a miraculous abundance of tangible goods. Most of our failures will probably require at least a bit of waiting and trusting that eventually Jesus will use this emptiness or failure for His glory and His plan for our welfare…not woe.

Spoiler Alert! (We Will Live Happily Ever After)

Peter, whose blunders are so frequent in the Gospels, shows us that we too can achieve greatness. His ministry most likely did not feel or look successful. It looked much like that of Christ whose life and ministry was looked upon as a failure up until the Resurrection. So also our lives may appear to be lacking in value, but if we remain under the gaze of Jesus and strive to live in the truth of our identity as Children of God, we will achieve the greatest success, sainthood.

Someday, in Heaven, we will hopefully be able chat with Peter, praise God, and laugh about our failures which were transformed into our greatest moments of sanctity. We might feel like we are currently getting a poor return for our efforts, but trust in the example of Peter, it’s worth the struggle! 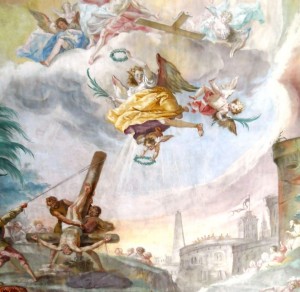 How often have we heard these words or spoken them? Especially with older kids and teenagers, we use this phrase to console ourselves when we don’t know how to respond to their new behaviors.

But what if it’s not a phase? How do we know? What if this little misbehavior is the beginning of an addiction? This is not meant to scare you, but to heighten your sensitivity to the signs of the pain that our children/young adults are unable to express in words. I can speak specifically and personally about the wound of eating disorders and how I wished someone had recognized my struggle. However, the varieties of disorders and addictions that plague our culture (regardless of our age, faith, and upbringing) have a very similar root.

What are all young people searching for in our culture? They are looking for belonging and identity. In the backlash of the “you can be whatever you want” spirit of the preceding generation, wishing to be free from all labels or generalizations, this current generation feels lost. We are now living in a “create-yourself” culture where, at a very early age, children are taught to create an identity for themselves and define their worth by their successes and achievements.

This can be overwhelming in a world with so many options and choices along with the expectation that those choices must lead to success. In an attempt to control the changing world around them, many turn to self-destructive behaviors to cope. For those of us that are in contact with these young people as catechists and ministers, it is not enough to tell them what is right and just, we must also meet them where they are in their sufferings and woundedness, as Christ does for each one of us. When it is tempting to ignore the fidgeting troublemaker in the back row or tune out the noise of the latest middle school gossip, these might be helpful reminders to address the pain that our young people are carrying and don’t necessarily have the tools to process properly. We are faced now with the effects of decades of poor emotional and social development, and if anyone should be a part of it Christ should!

In the next few posts I hope to present my own experience of healing, as well as some tools to help you and those you serve to begin to see identity in the Heart of Christ rather than in “success” or “image,” which leads undoubtedly to disappointment, discouragement, depression, and despair.