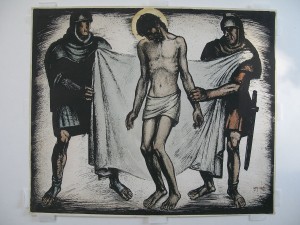 St. Bernard of Clairvaux and St. Padre Pio had many things in common. For one thing, both men were profound examples of piety and dedication to their calling of serving God.  Both men were mystics with considerable supernatural gifts who communicated with Our Lord in various ways.  Beyond that, however, both men had a profound devotion to the Shoulder Wound of Christ.

According to tradition, St. Bernard once asked Our Lord to reveal His greatest unrecorded suffering. Our Lord answered that His Shoulder Wound was the source of great suffering, and promised to grant what one asks, if it be the Will of God, through devotion to that Shoulder Wound.

Many know that the Capuchin friar, priest, and mystic, St. Padre Pio, who died in 1968, bore the Wounds of Christ ( Stigmata).  What most do not know, however, is that Padre Pio’s greatest pain came from an equally unrecorded shoulder wound.

Two great, mystical saints who were blessed to communicate with Our Lord and who displayed a great devotion to Christ’s Shoulder Wound, with one bearing that same, secret wound on his shoulder.  Surely, there are a number of lessons in this coincidence and story for each of us!

First, we are reminded that the greatest suffering is often the least visible.  In a society and world which relishes in the visual, the plainly seen, and the obvious, following Christ is often more a question of having the compassion to look beyond the visible, and to feel for the other’s hidden pain.

Second, we are reminded that the follower of Christ is more interested in reaching out to those in need than proclaiming his or her own sufferings and sorrows.  Too often, we make our troubles public seeking to either make ourselves the center of attention or, just as often, to paint ourselves as martyrs.  The Holy Shoulder Wound of Christ reminds us that the greatest sanctity comes from offering our sorrows and struggles to God rather than waving them as badges of honor.

Lastly, Christ’s Shoulder Wound came at the point of the most constant and heavy contact with the heavy cross.  We are all called to carry our crosses and, most likely, carrying those crosses will involve some point of contact deep in our lives at which our greatest sorrows and difficulties will be found.  It is both realistic and practical to realize and accept that carrying our crosses is more than a symbolic act or solemn proclamation.  Rather, such a dedication and sacrifice will have a very real and often clear impact on our lives.  It is at this point where our devotion to Christ and willingness to follow in His footsteps will be most valuable.

We would be wise to heed the lessons of Christ’s Holy Shoulder Wound, for It vividly reminds us that the greatest sanctity comes in silent sacrifice, the greatest devotion comes in selfless fortitude, and the greatest love often comes from actions and not merely from words.