Recently I participated in an online discussion about baptism.  One of the comments made, by a non-Catholic, was that the Bible requires a person to be fully immersed during baptism.  I wanted to share my reply to her with the readers of Amazing Catechists.

Scripture is not exactly clear on this. I can tell you, for the record, I have seen Catholic Churches where infants have water sprinkled on them and adults are fully submerged. It’s rare for full immersion in a Catholic Church, but it is out there.

After Peter preached his first sermon, it says in Acts 2:41 that 3000 were baptized. I’ve read that archaeologists have demonstrated there was not a sufficient enough water supply for so many to have been immersed and even if there was, the people of Jerusalem would not have allowed for the contamination of the city’s water supply to have 3000 dirty people immersed. If that is true, and it seems reasonable, then either 3000 people were not baptized or they were not baptized by full immersion. Something to think about.

I know you prefer to focus our conversation on scripture, so I want to look at the word for baptism using immersion: βαπτίζω or baptizō

In Luke 11:38, Jesus is going to have dinner. Luke writes, “The Pharisee was astonished to see that he did not first wash (baptizō) before dinner.” The word used for “wash” is baptizō. I suppose an argument could be made that Jesus would “fully immerse” his hands during washing, but isn’t it more likely that he would pour water over his hands above a small bowl or basin? So therefore, baptizō has meanings apart from full immersion baptism.

There is a Greek word for washing (hands). It is νίπτω or niptō and we can see it used in Mark 7:3: “For the Pharisees, and all the Jews, do not eat unless they wash (niptō) their hands, observing the tradition of the elders.”

Then we can see another use of baptizō. In Luke 12:50 we see Jesus saying, “I have a baptism (baptisma) to be baptized (baptizō) with; and how I am constrained until it is accomplished!”

So now we see baptizō being used metaphorically to describe the suffering (i.e his Passion) Jesus is to endure.

Now, an argument could be made that one would be fully immersed in the Holy Spirit, thus confirming the understanding of baptizō as full immersion. However, let’s look at the second chapter of Acts. In three instances in that one chapter (2:17, 2:18, 2:33), the Spirit is described as being “poured” out (ἐκχέω or ekcheō) (i.e. not immersed).

The point behind this linguistics exercise is simply to point out one thing: baptizō, the word used by born-again Christians to insist on full immersion as the only valid means for baptism, is used broadly enough in scripture to incorporate “pouring” as well as “immersion.” Combine the massive amount of scriptural evidence with writings apart from scripture and art from that period (below), and the evidence is overwhelming that pouring or sprinkling over the head is as valid a means for baptism as full immersion and possibly even the preferred option. 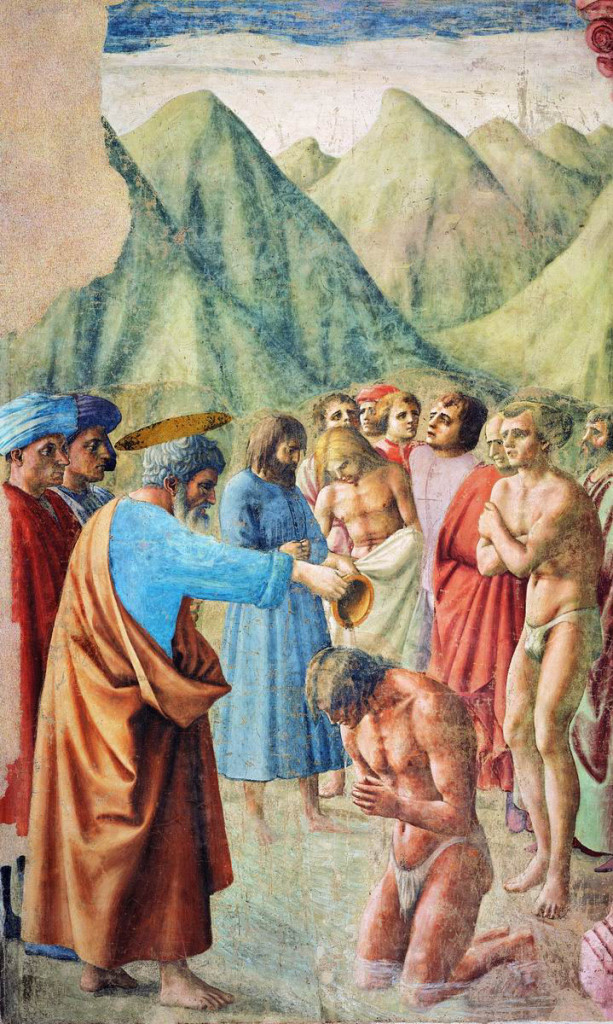 Painting which depicts a baptism by pouring water over the head while kneeling in a river.