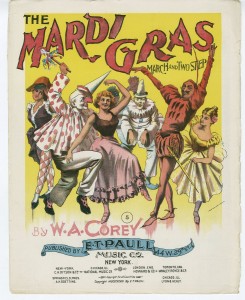 As I was perusing Facebook the other day I noticed that even in the middle of Mardi Gras and Valentine’s Day, this week also celebrates National Friend’s Day. Our culture has created many such days to celebrate everything from relationships (e.g. National Siblings Day) to simple comforts (National Ice Cream Day).

I could not help but think that what our culture truly craves is much more than ice cream, and even more than Facebook friendships. Our culture thirsts for reasons to celebrate life. It invents new holidays and adopts religious feast days like Mardi Gras and Saint Patrick’s Day, though often without the liturgical significance from which it was established.

Our world grasps for holidays and weekends to look forward to, essentially, reasons to keep going. Most commuters I see on Monday mornings have that “I can’t wait until the weekend” look. But those longed for moments come and go and they often never provide the refreshment needed. Nor do they prevent Monday from coming again.

Without an eternal perspective life seems like a random conglomeration of pointless days…unless there can be something to celebrate! In the attempt to remedy hopelessness, the world embraces feast days but often forgets the One who is at the center of all, the One who gives meaning and purpose to each of our lives, to every moment of every day. He gives us hope for the greatest of holidays, an eternal “weekend” if you will.

We can all get sidetracked by the secular mentality and forget what we are living for, but the Church comes to our aid! On every day of the year there is at least one person to celebrate – a saint who is already participating in the Eternal Life to which we all hope to be invited. There are solemnities, feast days, and memorials throughout the year to point us to the purpose of this life, much more so than Mardi Gras parades and Saint Patrick Day parties. Celebrating these days with the Lord in mind leads us on towards that Life we all hope to inherit.

As we celebrate Mardi Gras and prepare for Lent, here are a few questions that might be helpful as we seek to appreciate the Lord’s presence here and now and also look forward to what is to come: 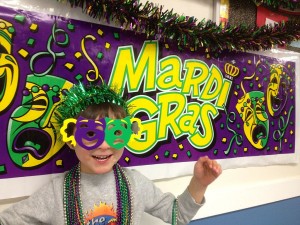 I hope that this reflection helps you to find even more joy in your celebrations, so that you will be constantly reminded of the Heavenly feast to which we can participate in the Sacraments and to which we hope to celebrate fully in the life to come.

The Feast of Christ the King is a fairly new when one considers the whole 2000 year history of the Church.  It was instituted on December 11, 1925 by Pope Pius XI with his encyclical letter, Quas primas.  The Universal Church will celebrate the Feast on November 25, 2012.

Since the annual feast is upon us again, I wanted to take this opportunity to look at a few parts of Pope Pius’ letter in light of where we are today as a society and as a Church.  What always fascinates me when reading the teaching texts of the Successors of Peter is how timeless they are.  Quas primas was written 87 years ago, but much of what a person reads in it seems to be addressing concerns in our present day.  Documents like Quas primas are only historical documents in the sense they were written a long time ago; however, they are also living documents because the Spirit who guided their authorship still guides the Church today.

So let’s take a look at Quas primas:

When once men recognize, both in private and in public life, that Christ is King, society will at last receive the great blessings of real liberty, well-ordered discipline, peace and harmony (QP, 19).

Yesterday shoppers charged out into the pre-dawn darkness to participate in the annual shopping ritual known as “Black Friday.”  This mayhem brings out the worst in people as shoppers literally shoot each other over parking spots, the last sale item, or this year’s “must have” toy.  As Pius wrote, it is only when people acknowledge Christ as King in “private and public life” that society will have “well-ordered discipline, peace and harmony.”  Until then, we can expect the descent into madness to only quicken.

If princes and magistrates duly elected are filled with the persuasion that they rule, not by their own right, but by the mandate and in the place of the Divine King, they will exercise their authority piously and wisely, and they will make laws and administer them, having in view the common good and also the human dignity of their subjects (QP, 19).

Earlier this month, Americans went to the polls to elect their governmental officials.  And regardless of which party you affiliate with, the overwhelming amount of Americans agree on one thing – their distrust of the government.  A 2010 Pew Poll found 80% of those asked did not trust the government.  A NY Times poll in October 2011, only 13 months ago, found that 89% of those polled said they “distrust government to do the right thing.”  It is unlikely America will have elected leaders that will “will exercise their authority piously and wisely” any time soon, at least not until the men and women elected recognize their role as leaders is a “mandate” from the Divine King.

Oh, what happiness would be Ours if all men, individuals, families, and nations, would but let themselves be governed by Christ!  …then at length will many evils be cured; then will the law regain its former authority; peace with all its blessings be restored (QP, 20).

That is an incredible vision, isn’t it?  A time of peace inside our raging hearts, in our families, and between nations.  What Christ brings that nothing else can is limitless, unconditional love.  If mankind accepted that love and put it in action then many evils would be cured as “love covers a multitude of sins” (I Pet 4:8).

If We ordain that the whole Catholic world shall revere Christ as King, We shall minister to the need of the present day, and at the same time provide an excellent remedy for the plague which now infects society. We refer to the plague of anti-clericalism, its errors and impious activities…. The rebellion of individuals and states against the authority of Christ has produced deplorable consequences…. that insatiable greed which is so often hidden under a pretense of public spirit and patriotism, and gives rise to so many private quarrels; a blind and immoderate selfishness, making men seek nothing but their own comfort and advantage, and measure everything by these; no peace in the home, because men have forgotten or neglect their duty; the unity and stability of the family undermined; society in a word, shaken to its foundations and on the way to ruin (QP, 24)

The hope Pope Pius had was that by establishing this annual Feast, Catholics would be able to witness to the world what it means to fall under the banner of Christ the King.  Anti-clericalism is often referred to as a “historical movement;” however, the term simply means people fighting against the real, or perceived,  power of clergy acting in the public square.  Once again, we need only to look back to the months leading up to the election when Catholic clergy spoke openly against key planks in the Democratic platform (e.g. abortion, artificial contraception).  Those bishops became the brunt of countless jokes and the Church’s teachings mocked as antiquated and irrelevant.  There is as much a need today for Catholics, ordained and lay, to stand up and proclaim loud and clear that the path the country has been walking, and continues to go down, will only further weaken the foundation of the country.

When we pay honor to the princely dignity of Christ, men will doubtless be reminded that the Church, founded by Christ as a perfect society, has a natural and inalienable right to perfect freedom and immunity from the power of the state; and that in fulfilling the task committed to her by God of teaching, ruling, and guiding to eternal bliss those who belong to the kingdom of Christ, she cannot be subject to any external power (QP, 31)

I would be willing to wager that if I read the previous quote to someone even semi-cognizant of the ongoing fight between the Catholic Bishops in the US and the Obama Administration, they would have likely assume it came from a statement written in the past six months, not 87 years ago.

The faithful, moreover, by meditating upon these truths, will gain much strength and courage, enabling them to form their lives after the true Christian ideal…. If all these truths are presented to the faithful for their consideration, they will prove a powerful incentive to perfection (QP, 33).

Pope Pius directed the final paragraphs of his encyclical to individual believers, writing that when they meditate on the truth of Christ as King in their lives they “will gain much strength and courage.”  Many believers today need a shot of “strength and courage.”  Their faith has weakened.  Their witness has grown cold. Men and women who may have looked upon them as an example sink deeper in their own despair.  Who can endure, they ask, if this person who claims to be a Catholic acts as if Christ never existed?  Our individual witness is so important; it can not be over stressed!

So take advantage of tomorrow’s Feast to acknowledge Christ in all areas of your life and he will not only make your path straight but also use you as a witness to help others on their path as well; together, with Christ leading the way, we can change the world (cf. Prov 3:6, Mt 28:19-20, and  Acts 1:8).