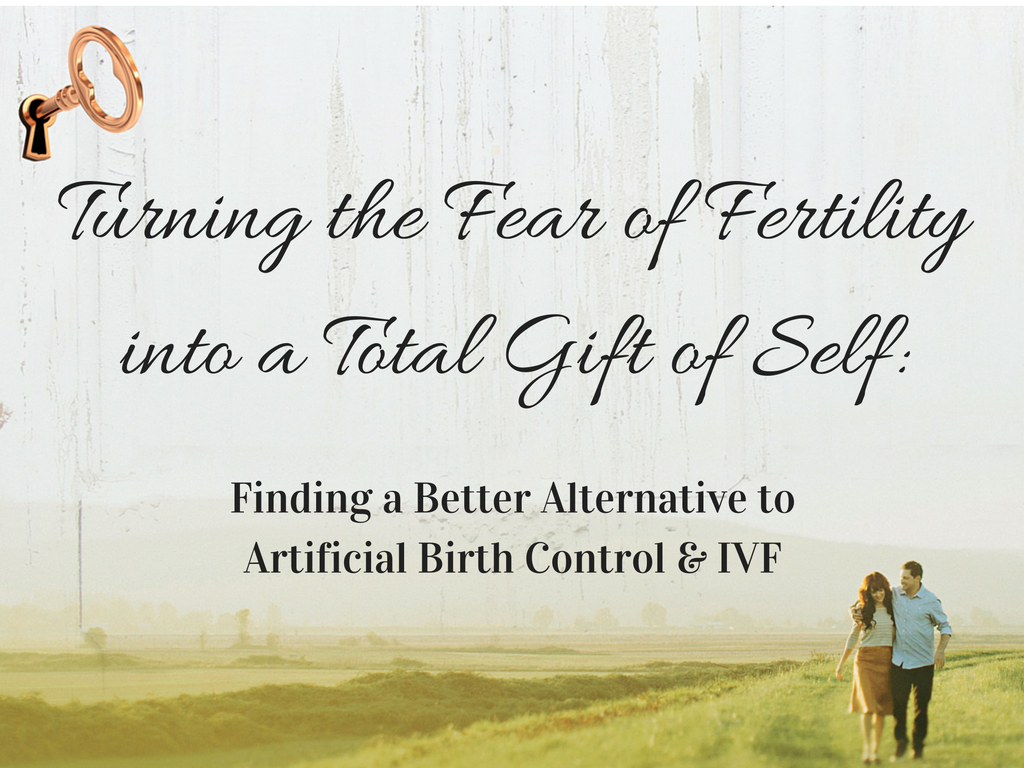 Many Catholics don’t understand the value of Natural Family Planning, and even fewer use it (about 2% by some accounts). Even fewer are aware of the Catholic Church’s principled objection to techniques such as in vitro fertilization. These teachings can be hard to transmit, because they are hard for people to hear, especially couples who are struggling with infertility and desperately want their own child. But as one couple told us in a pre-Cana class we were teaching, “if you don’t tell us, who will?”

We included what we felt to be a gentle yet crystal clear explanation of the Church’s position on NFP, contraception, and IVF in Chapter 8 of The Four Keys to Everlasting Love: How Your Catholic Marriage Can Bring You Joy for a Lifetime. Please get your copy, read along, and join in the discussion with the 4 Keys Online Book Club on Facebook. FOR A PRINTER-FRIENDLY VERSION OF THE WORKSHEET, CLICK HERE.

Turning the Fear of Fertility into a Total Gift of Self:
Finding a Better Alternative to Artificial Birth Control & IVF

According to Pope Francis, when we rob sexual acts of their natural fruitfulness by using contraception, we disfigure married love (Amoris Laetitia, 80). But 75% of sexually active Catholics use artificial birth control, according to one 2006-2010 study. So what’s causing the major disconnect between what the Church teaches and what vast numbers of Catholics actually do? One big cause is fear.

Women especially are taught to fear their fertility during their teen years when adults (with the best of intentions) warn of the dangers of premarital sex. In addition, many couples worry about the impact of children on finances or career plans. “Women can be put into a state of constantly fighting their fertility, chemically suppressing it when it’s at its height and then trying to jump-start it as it diminishes,” say Manny and Karee in Chapter Eight of The Four Keys.

Natural Family Planning (or NFP) assists women in breaking that vicious cycle. NFP encourages the mindset that fertility is a great blessing. It helps couples to avoid or achieve pregnancy in an effective, safe, ethical, and relatively inexpensive way. And it helps them develop the gift of sexual self-control. In Chapter Eight, Manny and Karee offer scads of helpful information on contraception, NFP, and IVF, including:

You can use the following conversation starters to get a discussion going between yourselves or in a small group. If it helps, think it over on your own time, take it to prayer, and jot down your answers before talking about them.

1.  Do you and your spouse agree on the morality of contraception? If you don’t, how do you cope with this disagreement?


3. Do you or anyone you know use NFP? What were the most powerful reasons influencing the choice to use NFP?

4.  Which NFP method do you think might work best for you and why?

Many Christians (and some Catholics) attempt to cite Scripture to justify their use of artificial contraception saying that the Bible has nothing to say on this topic. I agree that nowhere in the Bible are the actual words “birth control” (since this term was first coined by Margaret Sanger in 1914). However, Scripture does have a lot to say in support of the 2000-year Catholic teaching which states that the use of contraception and non-life-giving behaviors is immoral. Fertility and children are always seen as a blessing.

Genesis 1:27-28: “And God created man in His own image, in the image of God He created him; male and female He created them. And God blessed them; and God said to them, Be fruitful and multiply and fill the earth, and subdue it; and rule over the fish of the sea and over the birds of the sky, and over every living thing that moves on the earth.”

Psalm 127:3-5: “Behold, children are a gift of the Lord; the fruit of the womb is a reward. Like arrows in the hand of a warrior, so are the children on one’s youth. Blessed is the man whose quiver is full of them; they shall not be ashamed, when they speak with their enemies in the gate.”
Even from the moment of conception, children are seen as a gift from the Lord:

Psalm 139:13-14: “For You created my innermost being; You knit me together in my mother’s womb. I praise You because I am fearfully and wonderfully made.”

Isaiah 49:1,5: “Before I was born the Lord called me…and now the Lord says, He who formed me in the womb to be His servant…”

Barrenness is seen a curse:

Hosea 9:10-17: “And they became as detestable as that which they loved. As for Ephraim, their glory will fly away like a bird…No birth, no pregnancy and no conception!”

Exodus 23:25-26: “But you shall serve the LORD your God, and He will bless your bread and your water; and I will remove sickness from your midst. There shall be no one miscarrying or barren in your land; I will fulfill the number of your days.”

Deuteronomy 7:13-14: “He will love you and bless you and multiply you; He will also bless the fruit of your womb and the fruit of your ground, your grain and your new wine and your oil, the increase of your herd and the young of your flock, in the land which He swore to your forefathers to give you. You shall be blessed above all peoples; there will be no male or female barren among you or among your cattle.”

The clearest indication that birth control and non-life-giving behaviors are immoral is the following passage about Onan, whose brother, Er, had died before he was able to father a child. Onan was being asked to follow the Levirate Law, which commanded him to have intercourse with his brother’s widow.

Genesis 38: 8-10: “Then Judah said to Onan, Go in to your brother’s wife, and perform your duty as a brother-in-law to her, and raise up offspring for your brother. Onan knew that the offspring would not be his; so when he went in to his brother’s wife, he wasted his seed on the ground in order not to give offspring to his brother. But what he did was displeasing in the sight of the Lord; so He took his life also.”

The Levirate Law was in place in order to preserve the family line. If a man refused to perform his duty, his sister-in-law could strike him in the face with his sandal. The death penalty was never involved. God considered this incident more than a refusal of duty. It was such a serious offense that he killed Onan.

The following excellent article by Fr. William Saunders is an extensive list of the contraceptive references in the Bible:
https://www.catholiceducation.org/articles/religion/re0663.html