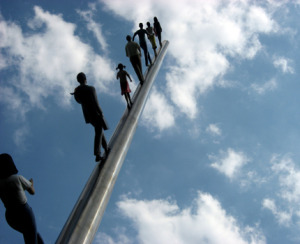 Have you ever arrived at the airport determined to carry your own bags to your check -in line without the assistance of a baggage handler?  You figured you could avoid that tip and start your vacation on a money saving note.  For every passenger “going it alone” there is another asking for help with one carry-on bag trying to avoid breaking a nail or getting sweaty.  In between, of course, are the passengers who may have physical limitations preventing them from carrying heavy bags, or the families which divide the task to lessen the load.

Let’s face it; carrying heavy bags is no fun and, most people, given a chance, would avoid this task as much as possible.  The problem, of course, is that many people do not want to pay the expected tip to the baggage handler.  If the service was completely free, many more people would take advantage of the help. Others refuse to acknowledge that they need the help, and can often be seen proclaiming “I got it” as they risk a double hernia and wrap a third bag around their neck.  The reality is that we all carry luggage from time to time, whether we like it or not.

If dragging a small inheritance around is such a drag, one might wonder why so many of us do it so often.  Sometimes, we may have no choice, as when we simply must take many things somewhere.  Many times, however, the load is our own doing, and the burden is our own creation.

I once read that we could reduce the amount and weight of what we lug around by 80% if we simply planned ahead, seriously examined whether or not we needed some of the stuff we carry, and made a determined effort to be more efficient.   One study concluded that at least half of what we drag around is stuff that we always drag around because we are too lazy or distracted to remove it or decide if it is necessary at the present.  In other words, more than half of our burdens, our luggage, and the heavy physical, emotional, and intellectual heavy lifting we do come from habit. We develop a script, a menu, a  to- do list, a set of daily ingredients, and then we wrap ourselves around that stuff as if it were a flotation device or a life jacket.  Regardless of how much luggage we drag around,  we can classify said baggage into  four distinct categories as described below.

Harms………This is the stuff we have done wrong, otherwise known as our sins.  Many people accumulate loads of sinful baggage which they refuse to unload out of pride, embarrassment, or fear.  I do not know about you, but I feel like a giant weight has been removed when I go to confession.  Imagine tons of this garbage piling up in your conscience and life and realize how the task of removal only gets more difficult and less likely with time.

Hiccups…..These are the regrets in our lives.  We all carry loads of old life stories and issues with us. The class I did not study for, the job I did not take, the person I did not ask out, and the care for my health that I did not take seriously enough are just some examples.  Life is like a newspaper.  We should read  and learn from the news and then throw the old paper away.  Living in the past is a terrible prison and weight on our lives.

Hopes….These are the things we are dying to do, achieve, or experience.  Perhaps you want to retire at a certain age, or maybe you want to earn or save a certain amount of money by a given age in the future.  Many call these hopes their bucket list, or things they want to do before they die. It is one thing to aspire, plan, and work toward goals.  Likewise, it is commendable to strategize, build, and focus on a given task. However, it is a counterproductive, virtual life prison to wrap your entire life around constantly working toward these hopes 24/7.

Hurts….These are the wounds others have inflicted on us.  How often do we drag around resentments and bitterness while the person who hurt us is oblivious or could not care less.  We think that we are using this anger as a weapon of revenge, but we are only hurting ourselves.  Ignoring the culprit feels right as you do it but, in the long run, such things only breed more hurt and harm.

The solution to all of this, of course, is to let Christ be your Divine Baggage Handler.  Leave all of this stuff in His hands, and have faith that He will take care of your luggage.  The only tips you need to give Him are your love, obedience, faith, trust, and devotion.  So, the next time you feel the weight of the world on your shoulders, take a load off via Christ and give yourself a break.