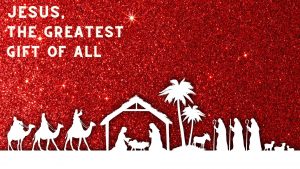 This week, I offer you another Advent-themed script about a grumpy kid frustrated with all the busyness and distraction of the adults during Advent.

Jesus the Greatest Gift of All-Advent

Feel free to change the names, add or subtract from the content, and share my free script in any way that helps you catechize and enjoy the season with your family, your students, or your parish. I recommend it be used as a puppet show for little ones or a skit to be performed by your confident readers!

NOTE: The only thing I ask is that you not sell the scripts. I own the copyrights and I’d like to keep them free for everyone. If you charge for performances, that’s fine. I know your ministries can use all the help they can get!

Some of my scripts, you will notice, were inspired (many years ago) by a Christian script writer by the name of Louise Ferry. I believe this is where you can currently find her wonderful work: https://puppetscripts.tripod.com/puppet.htm

Today, to mark the beginning of this holy Advent season, I’m sharing a sweet Advent puppet script, which I wrote years ago. It can be performed easily by any adult or teen. In fact, any child who reads well can perform them!

I have dozens of such scripts, some connected with the liturgical year, others with articles of our faith, others with virtues (which I created for our local YMCA nursery school), some created for VBS programs (for free, by request), and so on. I’ll be sharing them here at AmazingCatechists.com, in the coming weeks and months, and may eventually create an ebook, so you can acquire the whole “collection.”

How to perform the show

Simply sit with the script pages laid out on a desk or story rug and gather the children around you, or hand out copies and use it as a skit for older students to act out together in front of the class.

Use a different “voice” for each of the two characters, moving the one that is speaking, to make it clear for the children.

Some of them are wacky and silly, while others are more reverent. Be sensitive to mood, and have fun!

Please read my “Note on Reverence” before using any of my scripts. It’s important, truly.

A note from the author about reverence

And, without further ado, here is The Empty Manger, to start off your Advent season with the children:

A little history, if you have a minute more…

Between 2003 and 2008, I wrote dozens of puppet scripts for use in a YMCA nursery-school (virtue) program, then for Catholic and Christian children’s events, library programs, parties, scout troops, and finally my own religious education classroom. I was a volunteer mom teaching elementary-aged kids, but I was also a writer and a former actress, so–along with the Holy Rosary and our parish curriculum–I incorporated singing and creative dramatics, every week.

I almost always capped my lessons with a puppet show (hastily created beforehand), and the children adored them. It was a reward for good behavior, I told the children, but it was also a way to emphasize a point from that day’s lesson, break open a difficult concept, or make a dry subject fun and intriguing. If we had time and the children were clamoring to see it again, I would do an encore performance. Each lasts only a few minutes, and I figured, “Hey, they’re asking for another lesson in their faith. How can I say no?” They wanted to touch and talk with the puppets, so I often held a brief, extremely silly, improvised Q&A with the characters, after the show.

To ignite their imaginations is extremely important to me, and I sincerely believe that it is a crying shame, if not actually sinful because it’s so dishonest, to make our amazing, transformative Catholic faith a dull and ordinary business. So I gave it my all, each week, begging the Holy Spirit to “light me up” and make the lessons impactful. He never let me down.

A little more about how to use them…

At the end of the day’s teaching, using whatever hand puppets I had at the time, I sat on the story rug, placed the scripts on the floor in front of me, and gathered the eager children around me. I started out using some old, neglected puppets they had at the YMCA, when I volunteered for a summer program with nursery-school-aged children. I also incorporated sock puppets, which were a scream and easy to make (and I am the least crafty person I know). But eventually, I bought an adorable, racially-diverse collection of “kid” puppets that Oriental Trading used to sell cheap. I added some animal puppets my daughter had been given (and never used), and a few oddball ones I borrowed from some enthusiastic neighbor kids (who were not using their’s, either).

A couple of important insights

As I branched out into children’s parties and library programs, I noticed a couple of amazing things:

The puppets excited them like nothing else–like animated characters sprung into 3-D before their eyes!

Then, in 2007 (or thereabouts), I was on a Catholic writers’ email group, and offered to share my scripts for free to anyone who wanted them. Another member, the lovely Lisa Hendey, invited me to share them with the world at her popular site, CatholicMom.com. They had a home there, as a “puppet ministry” until 2019, when the site went through an overhaul and all PDF content was lost. (I just found out about it because someone tracked me down, asking for the scripts, and I made inquiries.)

The upshot is that I’m now sharing them here, so stay tuned!

Next up will be a Christmas show about a disgruntled kid feeling lost in the busyness of the season, who learns a lesson about service and sacrifice. Coming soon!

I pray these little lessons bless you and the children you care about, pray for, and teach. I would love to hear from you about how you use them, and I pray they will inspire you to create and share scripts of your own! I’d be happy to post them, here.

Feel free to write to me: lisa@wonderfullymade139.com

A very sweet and holy Advent to you and yours!