St. Paul speaks quite a bit about boasting!

In his second letter to the Corinthians, he mentions that he has been the recipient of many revelations and could well boast. After all, Jesus himself has spoken directly to Paul, on the road to Damascus. Paul is a beloved preacher and has won many souls for God. But instead of boasting of his achievements, which he recognizes as a distraction, he boasts because the Lord has permitted him to be a weak and troubled vessel. An “angel of Satan,” he says, torments his flesh.

Three times I begged the Lord about this, that it might leave me, but he said to me, “My grace is sufficient for you, for power is made perfect in weakness.” I will rather boast most gladly of my weaknesses, in order that the power of Christ may dwell with me. (2 Cor 12:8-9)

I rather casually gave up complaining for Lent, right at the last minute, because I hadn’t really given it much thought. But I know that I complain too much, so it seemed like a great idea, and honestly, I really didn’t expect it to be that hard.

But the Lord saw fit to allow me to go through a period of intense suffering that has consumed my Lent.

An old emotional wound that I thought was healed broke open and my life became profoundly dark. The pain was unrelenting and terrible. I was raw and weak. To say that I was overflowing with complaints and loss of temper is an understatement. I was a total mess for most of Lent, which got me going to confession a lot more than usual, which brought me more graces than usual. 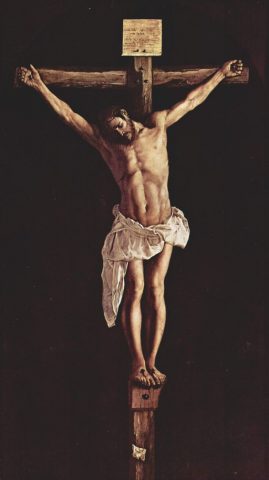 In agony, I clung to Jesus and contemplated the cross. I was in desolation.

But that desolation is a privilege, according to the saints. Hard to accept, but it’s so revealing. I felt so intimate with Christ. One day, I looked up at the cross at Mass and the thought came to me, “He felt this. So it must be a good thing to feel.”

I didn’t get a rush of good feelings—the pain remained—but I had a deep sense of calm that I knew was His voice in my soul, and it has not left me.

And I learned something that is probably the biggest grace I’ve ever received in any Lent in all of my 58 years as a Catholic:

It was strangely empowering being so weak and so desperate.

I had nothing to boast about but the cross.

But may I never boast except in the cross of our Lord Jesus Christ, through which the world has been crucified to me, and I to the world. (Gal 6:14)

Total failure was the place where Jesus met me, this Lent. Failure cleared away all my pride and showed me that the cross could truly be a place of victory.

In the eighth century, St. Andrew of Crete wrote that the cross is “both the sign of God’s suffering and the trophy of his victory” because the cross is “the means by which the devil was wounded and death conquered.”

Chris Tomlin sings a song called, “At the Cross,” and my favorite line says that the cross is “a place where sin and shame are powerless.”

Jesus rendered my sin and my shame powerless: through the cross, through the consecration, and through reconciliation. So that when I was weakest, I received a gift that I don’t think I would have received if I were having a “perfect” Lent and feeling good about myself.

Yesterday, I was at an RCIA review session, and one of the team members was describing the moment of the consecration, at Mass, when the priest elevates the host. She told the catechumens that as we enter into the one-time sacrifice of the cross, Jesus is lifted up and offered to the Father for all of our sins, for all time.

But she added that, as baptized members of the Body of Christ, at the moment of the consecration, we too are lifted up and offered to the Father, and that bestows on us an astounding dignity.

In Holy Week, we will walk with Jesus through the failures of those he loves. Contemplate his response when the apostles all flee him and when Peter denies him three times. Jesus never stops working to save them.

Even the crucified thief, who squandered his life in sin–St. Dismas, whose feast day was today (March 25)–received the gift of paradise that very day. Why? Because, in the depths of his failure, St. Dismas recognized that he needed mercy and that Jesus was the Lord. And the response of Jesus went beyond his wildest imaginings. Paradise. THAT DAY.

My major offering for Lent was to avoid complaining. During the previous five weeks, I have complained more than I have in many years. To say that I failed is an understatement. My sin of complaint and ingratitude was magnified; it exploded and expanded and became epic in its power to color my days.

And yet, that sense of powerlessness drew me closer to God and increased my trust. At a particularly low moment, when the pain was almost unbearable, I felt God urging me to count blessings—which felt like sprinkling a thimbleful of water on a blazing fire. To turn my thoughts away from complaint and refocus on what was beautiful in my life was like walking head-on into a hurricane. I recognize that this powerful resistance within me was partly my own weakness and sin but also a sign of a spiritual battle taking place in my soul.

And yet, when I yielded grudgingly and started counting the beauty of the day, my comfortable home, my family and friends, my health—simple things—strength returned, and my mind began to clear. What had seemed unrelentingly dark faded and receded. It was like breaking a spell.

Our failures can bring us closer to God; they can make us more aware of our dependence, more ardent in prayer, and more childlike.

It is not the failure He focuses on; it is the disposition of our hearts.

Are we reaching for him? Learning from our falls? Resting in mercy?

For God so loved the world he gave his only begotten Son, that believers would not perish but would have eternal life. (John 3:16)