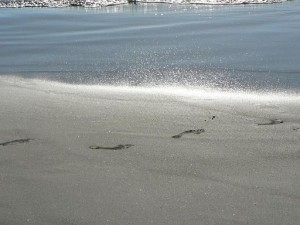 Mother Angelica of EWTN fame once wrote that the only true path to holiness is to live in the present.  What did she mean by this?

The Past: For Educational Purposes Only

We all know that the past provides us with many wonderful opportunities to learn and grow.  Our mistakes and stumbles provide us with a great educational resource as we try to grow toward God. Everything from learning how to deal with struggles to identifying and appreciating good friends  comes from our ability to reflect on our past experiences. However, we should keep the past only for that purpose. Too many people use the past as a pit of resentments, regrets, and ruminations which get us nowhere good.  I believe that the past should be like a newspaper:  read it, learn from it, and move on.

Many will argue that we must plan for the future.  Others will add that anticipating problems is smart thinking.  While this is all well and good, the only future we should spend much time on is figuring out how to have an eternity with God. Whatever future we think about better be thought about in the context of how God is involved.  A future without God is no future at all.

The Present:  Where Holiness Lives

As Mother Angelica so often stressed, too many people lose opportunities for holiness because they spend their time digging up the past or plotting the future.  See each moment in the present as the gift from God that it truly is.  The key to finding God and getting closer to God is right in front of us each day if we only take the time to look. Remember that the past is done and the future belongs to God.  If we live with God in the present, the future will take care of itself and the past will be more gentle on us.