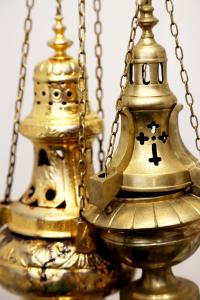 The other day I was working out at my local gym when I began to notice the various types of participants around me.  One man was sitting at his weight station looking at his cell phone.  Another was shooting the breeze with two other guys who were standing near his exercise machine.  A few folks took longer to wipe down and wipe off their station than to exercise, lifting the weight three of four times and getting up.  A guy nearby lifted far more weight than he could handle, judging by the look of death on his tomato red face.  After a few lifts he had to stop.  A lady behind me lifted a very light weight something like 40 times and left.  There were a few folks who clearly knew what they were doing, applying proper weights and technique and the right reps and sets. However, for each effective exerciser there were ten who were clueless, oblivious, lazy, creative, or any combination of those latter traits.

Suddenly, it occurred to me that I have been each of those exercisers when it comes to practicing and applying my faith.  Sometimes I am more interested in my cell phone than in praying.  I can think of numerous times when it was distracted in church speaking to someone, or when I dropped into church seemingly as a drive by visitor.  There have been times when I lifted more commitment than I could handle and gave up soon thereafter. Other times, I have been quite proud of myself for lifting the lightest burden possible a million times, as if I had accomplished anything by the process.  For every time I have been focused and effective in prayer or meditation, there have been two where I was going through the motions.

We may ask why people sign up for gym memberships and then go through the motions or do not even show up to the gym.  We may wonder in awe at how folks can attend mass once a month or less and think that they are good Catholics just for doing that.  Truth be told,  we are all guilty of doing such things with our faith.  We act as if the beautiful faith that we  have been gifted is a permanent tattoo that we can just wear and that is all.

Like it or not, we have to actually practice what we believe and preach.  We have to make our faith a real meaningful part of our life, sort of a routine on steroids that we do because we feel it, not out of some mindless habit.  We have to help anyone who asks us to explain things, or who is reaching out in general to see if the Good Samaritan story is just a myth.  Perhaps we can use this Lent to make our faith more than a glorified gym membership.  I think we can if we try.