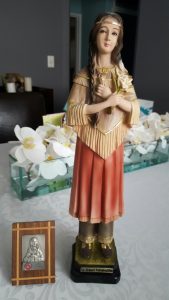 Tomorrow,  July14th, the Church celebrates the feast day of St. Kateri Tekakwitha, the first Native American to be recognized as a saint by the Catholic Church.  She was born in 1656, in the Mohawk village of Ossernenon,   near present Auriesville, New York.   Her mother was an Algonquin, who was captured by the Mohawks and who took a Mohawk chief as her husband.

Kateri contracted smallpox as a young child which scarred her skin and caused much humiliation in her youth in addition to killing her entire family.  She was thus raised by her uncle, who was the chief of a Mohawk clan .  Kateri was known as a skilled, diligent, and patient worker but, when she refused to marry a suitor chosen for her, she was punished by her parents by giving her more work to do.  Kateri did not complain but merely did as asked.  Eventually, her family gave up trying to force her to marry.

When Kateri converted to Catholicism at age 19, taking a vow of charity and pledging herself to Jesus Christ, she was persecuted by her village, forcing her to move to a Christian native community south of Montreal.  Kateri had a strong devotion to the Blessed Sacrament and the cross of Jesus, offered regular sacrifices, and practiced great self-denial and mortification.  In her last years, Kateri was known for speaking to and touching the hearts of the young with her example and words. Upon her death, witnesses noticed that her scars had disappeared.  Kateri is the patroness of ecology and the environment, people in exile and Native Americans.

This wonderful young woman’s story is enough reason to consider her a role model for Catholics, especially young girls.  She was bravely devoted to her faith, practiced great humility and self-sacrifice, and was willing to undergo difficulties and suffering to practice her Catholic religion.  She certainly did not take the easy route, nor did she crumble before great public and social pressure to either abandon or greatly dilute her Catholic devotion and practice.  However, I wish to add a more personal reason for my fascination with this great saint.

Many years ago, I was given a relic of a “very holy Native American girl” whose name I could never remember, much less pronounce.  I kept this relic stored away, figuring that it would become a quaint curiosity someday.  At some point, my youngest daughter became fascinated with Kateri, and it was then that I realized that the relic I had been given at least a decade earlier, before my daughter’s birth,  was, in fact, one of Kateri Tekakwitha. Already seeing this coincidence as perhaps something more, however, I was about to get one more nudge from above.

My family visits the Shrine of Our Lady of the Island, in Long Island, New York, every Good Friday. Three years ago, my daughter and I saw a beautiful statue of Kateri on sale, but the price was a bit high for our means so, sadly, I had to pass, much to my daughter’s sadness.  The following year, my daughter excitedly asked for what seemed like the same exact statue, but I did not believe that to be the case, since the statue was priced at half the price we had seen  just one year earlier. I could not believe that such a beautiful statue would ever be sold at half its previous price, and imagined that the present statue must have been a cheaper copy or smaller in some way.

Upon coming forward to pay for what seemed like an incredible bargain, we were told that a mistake had been made in pricing the statue and that it was, in fact, the original price which had scared me away just one year earlier.  Again, I seemingly had no choice but to back away from the purchase, as the original price was much to  high for my means.  Seeing my daughter so sad, the saleslady offered us the statue for the mistaken price, enabling us to purchase the item for our daughter.  It is my belief to this day that Tekakwitha wanted to go home with my daughter one way or another that afternoon, and she did. The photo above is of the relic and statue in question.  Sometimes, what we view here on earth as a mistake is simply part of Heaven’s plan.

My daughter’s love and devotion for St. Tekakwitha has not diminished in the few years since, as she shares Takakwitha’s love of nature and likes Native Americans very much.  God willing, she plans to take the Name Takakwitha as her confirmation name in 15 months.

I am sure many parents have similarly cute, yet powerful stories of simple devotion and manifestation of Heaven’s gentle touch in the lives of their children.  A simple relic given many years ago, honoring a holy girl who would one day become my daughter’s favorite saint was followed by a minor miracle allowing a good deal purchase of that same saint’s  statue.   In the quiet forests of upstate New York and Long Island,  hundreds of years apart, a beautiful, young saint reached out to a young heart willing to listen, and that young heart’s response and smile melted the years, and distance, away, leaving a message of love, service, and sacrifice all too obvious to ignore.  I can almost imagine my daughter having a silent conversation with her Native American friend amid the rustling of the trees and the gentle silence of nature.  I can just as easily recall my daughter’s smile after doing a presentation on Kateri at her school. God Willing, my daughter will flash that same smile the first time someone asks her how to pronounce Kateri’s full name at her confirmation.