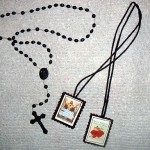 To find out more information on the importance of sacramentals, check out this helpful link:
https://www.fisheaters.com/sacramentalsintro.html

Ellen Gable Hrkach and her husband, James, have been certified NFP teachers since 1984. She's also an award-winning, bestselling author of twelve books, an editor, publisher, book coach, and ghostwriter. Her newest novel, Where Angels Pass, recently won First Place in Catholic Novels in the CMA Book Awards. The mother of five adult sons and grandmother of two precious grandchildren, Ellen lives with her husband in the country near Pakenham, Ontario. Her website is https://ellengable.wordpress.com.