It is true that saints and devotions chose us. For someone who hates pink, Valentines Day, and all things frilly and girly, the Sacred Heart is an unlikely devotion for me to be called to embrace. That is how I know it is the work of God. He often reveals His Love through this devotion, most of the time when I am convincing myself that all things are lost.

This particular story reminds me of the line from Saint Paul that “Love never fails,” and I would agree except I would add to this … “even when it seems like it already has.”

About six years ago when I was studying abroad in Rome I made plans to meet my sister in Capri with her friends, who were visiting on Spring Break. I got up early and went to my favorite Church, the “Gesu,” (where there was a sweet little Sacred Heart Chapel) for early morning Mass before going to the train. I got there with plenty of time and was excited to see my sister after being tied down to school work because of midterms. 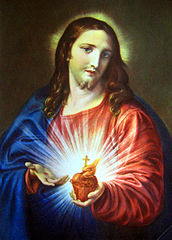 There were only a few minutes until the departure but there was still no track number. After inquiring about this I was told that this train was canceled. (Only in Italy!) Devastated, I walked around the train station and wandered into a nearby Church to wait for the next one which would shorten my excursion significantly.

Surprisingly, I felt much peace after praying for a few minutes and wondered which Church this was. I went to find a bulletin and found out it was a minor basilica…of the Sacred Heart. I felt much better, jumped on the next train, and got to where I was supposed to take a ferry to get to the island. 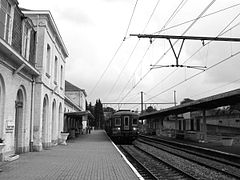 When I got to the ferry I realized that I had just missed the one I was trying to make. Frustrated even more I walked around and found a little Chapel almost hidden in the rocks of the rocky coast. I felt better again after prayer and looked up to see large banners hanging from the ceiling, images of the Sacred and Immaculate Hearts of Mary.

I was being cared for, I wasn’t alone!

Soon after I hopped on the ferry, (which happened to be an express!) I eventually got to Capri and met up with my sister, and as we were taking the ferry back to Rome I realized that it was Friday, and not just any Friday, but First Friday.

Just when I feel everything falling to pieces around me, when I feel like my life itself is a failure, this is the moment when the Love of God touches us. It doesn’t prevent us from missing trains or getting lost but it gives us the assurance that we belong to the Heart of Jesus.

The devotion of the Sacred Heart of Jesus isn’t always (or isn’t usually) a romantic “feeling” but it is the great privilege of being Sons and Daughters of God, or “co-heirs with Christ.” May the Lord reveal to you His great love this day. 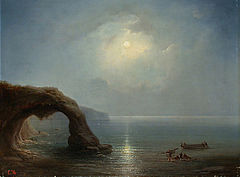