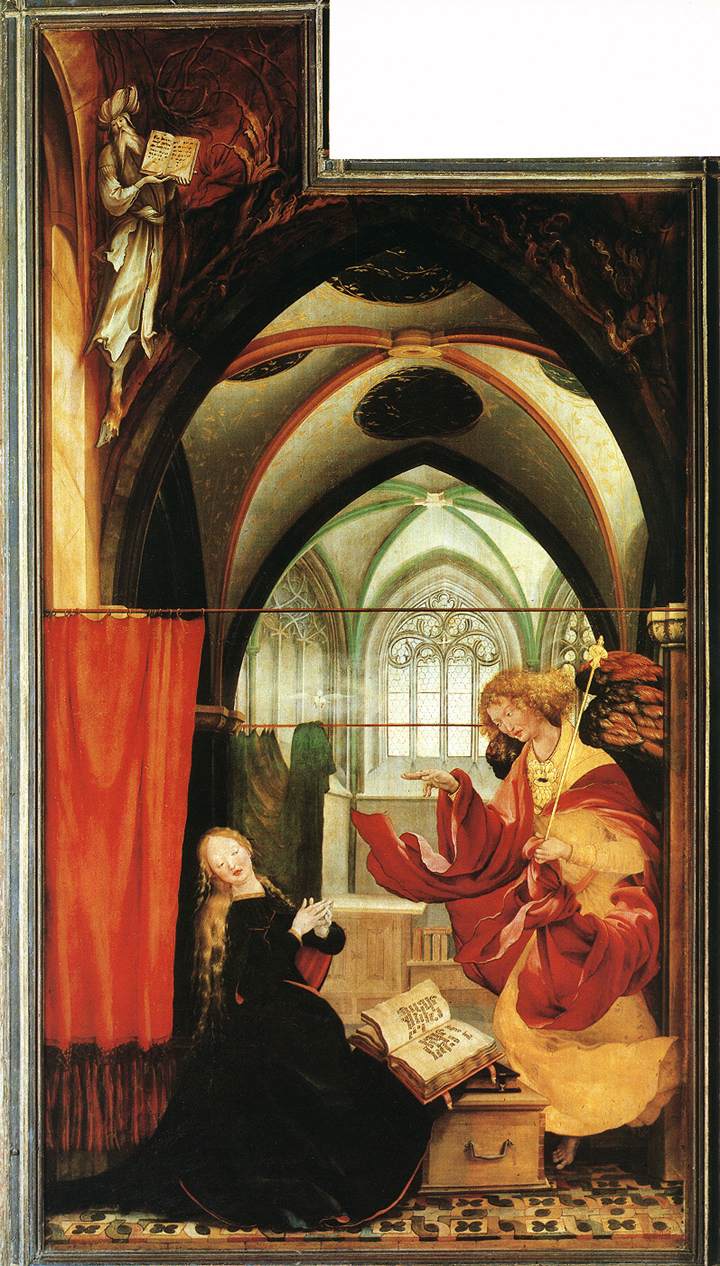 So let’s look at this blow-up: 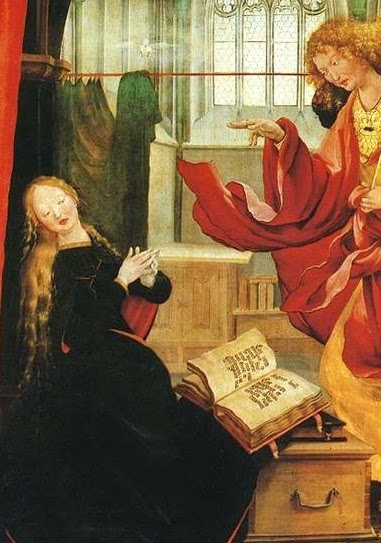 This is the moment when Mary accepts God’s uhh, proposal, delivered by Gabriel the messenger; and Mary learns how this baby-making will, you know, actually happen: “The Holy Spirit will come upon you, and the power of the Most High will overshadow you; therefore the child to be born will be called holy, the Son of God.” The Shekhinah makes God the Father’s power manifest in his physical creation, the fallen world we inhabit. And we know the Holy Spirit later showed himself as a dove at Jesus’ baptism, so why not here as well?

Now this is interesting: we expect the Holy Spirit to come over Mary (in this painting, over her womb). But the Shekhinah does too, both in Scripture and in the painting. That is, the power of God the Father, as expressed in the Glory Cloud, has shifted from overshadowing the Old Ark to overshadowing the New Ark. That makes sense- the Old Ark contained God’s Stuff: the Ten Commandments, the pot of Manna, and Aaron’s Staff. The New Ark contains God Himself, little zygote Jesus. I mean, if I were God the Father, this would be a no-brainer: my child trumps my stuff.

Strictly speaking though, Mary is not just an Ark, because she doesn’t hold stuff. She’s also a Tabernacle, where a living being dwells. Now you may reasonably think that both Noah’s family and baby Moses were living things inside Arks. That is true, but neither Ark was a dwelling per se, in which one settles down. They were temporary protections which had no intrinsic longterm value; and both Noah’s family and Moses abandoned their respective Arks for appropriate dwellings.

This difference between Arks and Tabernacles hints at a bigger difference between God’s presence in the two Covenants. In the Old Covenant (O.C.), God himself was spirit, and his Stuff in the Ark made physical testimony to Him. In Catholic terms, the Stuff was an O.C. analog to sacramentals such as Holy Water. But in the N.C., mere Stuff is amped-up by Jesus being God in the flesh. To some extent, yeah, Jesus’ body is stuff, but it’s as integral to his divine being as our bodies are to our human existence. Living stuff, fused with unique spirit. The stuff of Jesus’ body, or even my body, has moral aspects that don’t apply to say, rocks. Or a pot of Manna. So think of Jesus not as a sacramental such as Holy Water; but as a sacrament such as Baptism. All the difference in the world. And the idea of Mary being not just Ark, but Tabernacle, a little house for God to live in, expresses a whole new reality about how God will from then on dwell among his people. In other words, the N.C. counterpart to the O.C. Ark of Stuff is not another Ark of Stuff, but God Himself physically among us, dwelling in a house.

All that said, this is really a post about Catholicism and how its architecture may communicate Bible Truth. Here’s a photo from my church, St. Mary’s in Greenville, SC:

A lovely visual shorthand for the Holy Spirit spreading its protecting wings over Mary and Jesus, recalling the Annunciation and numerous additional Biblical references to overshadowing. But wait, there’s more! Not only does this liturgical detail allude to Jesus dwelling in Mary for 9 months, but connects that idea to the present day, and extends it indefinitely into the future. Have a look: 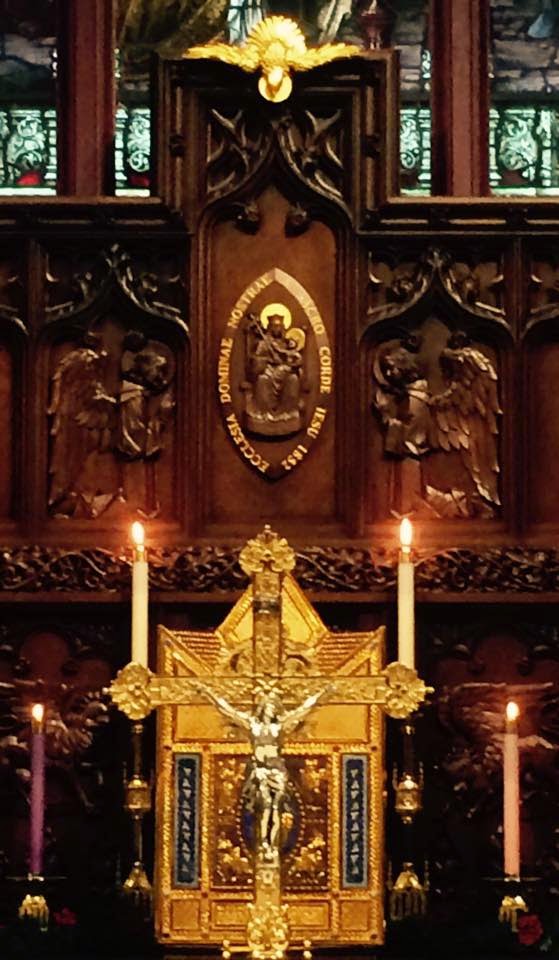 There ya go, the big picture. As Jesus once dwelled under the shadow of the Holy Spirit in Mary, he remains overshadowed, now dwelling in the little houses, the Tabernacles, in Catholics churches the world over. And Jesus will continue to dwell in them until the New Covenant passes away, and we live together with Him forever, bodies and souls united in the New Jerusalem.
In Catholic churches, big ideas hide in plain sight.
.
Church photos by Arlen Clarke, Choirmaster at St. Mary’s