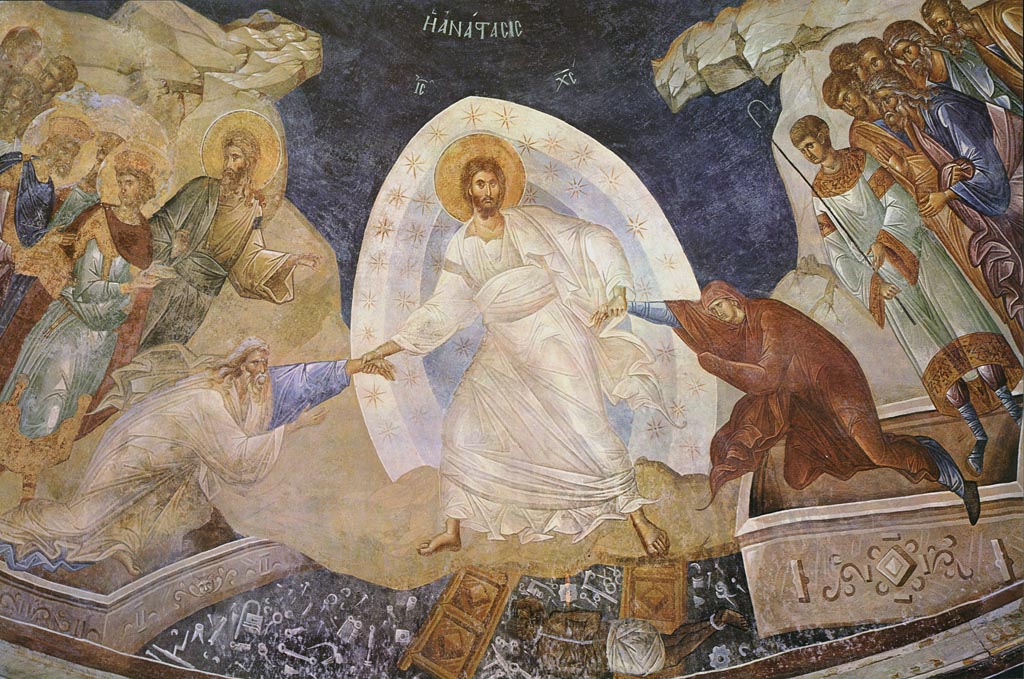 Too Catechetical for Words

We had 28 class meetings on this year’s Wednesday Night Sunday School schedule. Since New Year’s we’ve lost two days to snow, plus about another 1/2 class to other events. The later in the year I lose classtime, the harder it is to compensate. I don’t talk faster because we already move at the Speed of Comprehension. What I do instead is prioritize and eliminate, like Frederick the Great.

Two evenings ago we covered the Resurrection through the Ascension.  We use a handout showing an image of the Anastasis, and a Supper at Emmaus by Rembrandt. In covering the Anastasis, for reasons of time I didn’t translate a couple of Greek abbreviations in the picture, although I did explain the Greek word Anastasis, and show the kids how to pronounce the letters. Then we moved on.

After class one of the kids asks, what do these two things mean, i.e., the IC and XC.

See, what I leave out is exactly what someone wants to know. I go over the squiggies and the letters. In moments like this when a child wants to know something particular, I always want to answer the question directly, but than add a bit that points to the bigger picture. So I say a bit about words on ikons, and also write on the board similar squiggied-letters that often appear in Mary-ikons: MP and ThY, which abbreviate Μητηρ Θεού MITIR ThEOU, Mother [of] God. It was a nice little lesson.

Now, this isn’t just a chance to for a child to take away something extra; it’s also a chance to involve the parents. Next week I’ll give her a prayer card like this one:

Is has MP-ThY and also IC-XC. To the left and right are the Archangels Michael and Gabriel. The Greek says O AP M  (The ARchangel Michael) and O AP G (The ARchangel Gabriel). I’ll write the translations on the back. I’ll also get her to tell me what the angels are holding, and why they matter (they’re a few of the Instruments of the Passion). I’m confident she’ll know the cross and the spear. But what’s that other thing? I blew it up for a closer look, and I think it’s the sponge on the hyssop stick. She already knows what that is, it’s just not easy to recognize. I expect to give her hints, e.g. “I thirst.” I’ll conclude by saying she oughta show her parents what she’s learned and impress the heck out of them.

In this business you never know when or where stuff will grow. Just throw the seeds, you won’t run out.

If I had all the time in the world, a whole class could be spent on this single image: its visual catechesis, Queen of Heaven, King of Heaven, Mother of God, Fully God, Fully Man, Immaculate Conception, Crucifixion, angels, the Greek words, all of which allude to Scripture and of course the Big Catholic Picture.

For those who want to know more about cryptic Greek on ikons, here’s an old post about John the Baptist.