How many of us would die for the Faith?  I mean actually stand up in the face of certain death and declare that yes, I 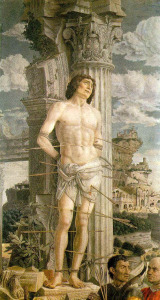 believe in the One, Holy, Catholic, and Apostolic Church founded by Christ and built on the rock of Peter. Over the course of the last two thousand years, there were many who did just that. Burned at the stake – Crucified – or other horrible ends.

Would I?  Would you?

We are surrounded by many comforts.  We have warm houses, food on the table, cloths on our backs. The internet provides us with seemingly unlimited entertainment.  Televisions provide sporting events in our very own family rooms.  We have a myriad of methods to pipe music into our ears.

Would you give it up and die for our Faith?

What if you were called not to die but just asked to endure some hardships.  Maybe a job loss has caused you to cut back.  How do you react?  Perhaps you are being given an opportunity to “die” to yourself by giving up some of those comforts.  Why would you do that?  Perhaps God wants you to begin to rely more on Him.

You don’t have to wait for a job loss, though.  Start your own “boot camp.” Cut out some of the things in your life that cause you to take your eyes off of God.  Give up something like television or internet for one day a week and say a Rosary instead. Keep that old smart phone instead of buying the latest gadget. Live with that coat another year and donate the savings to St. Vincent DePaul.  Give up desserts a few days a week.

Die to yourself.  Then, if you are ever truly called to make that choice of standing up for your faith, you will have been training for it all along.

The Shadow of His Wings

Lisa Mladinich believes that living boldly in the love of Christ makes every day an amazing adventure. She is thrilled to be a Gallup-Certified Professional Strengths Coach and a professional Life Coach certified by the International Coaching Federation. She is dedicated to helping clients discover and live powerfully into their natural talents, for God’s glory and their lasting joy. She coaches privately with individuals, ministry and business leaders, dating and married couples, and leads mastermind groups for Catholic creatives and those seeking to accelerate their growth through an awareness of natural talent. Lisa is a veteran speaker and webinar instructor, with online courses for teen and tween girls about authentic beauty and femininity, experienced through the liberating lens of the Catholic faith. (Find her classes live or recorded at HomeschoolConnections.com.) Lisa is a best-selling author and host of the Homeschooling Saints Podcast, dedicated to supporting the rapidly growing homeschooling community. She is in pre-production planning on two new Catholic media endeavors: an internet-TV program called, “Wonderfully Made: Your Talent. God’s Purpose,” and a new podcast, “Faith Focused Forward,” which she will cohost with Allison Ricciardi and Chantal Howard. Lisa is passionate about marriage, family life, promoting the Sacraments and the Holy Rosary, and teaching on the RCIA team at St. Patrick’s Church in Huntington, NY. Contact: lisa@mladinich.com.