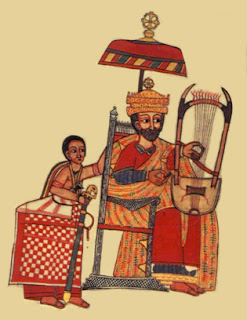 Up until I was eight years old I belonged to St. Francis de Sales parish in Houma, La., whose church is a lovely Gothic revival structure completed in 1938. My Catholic imagination was well-nurtured by its elegant proportions; the Bible stories vividly presented in the stained glass windows; and a dove whose wings overshadowed the crucifix, tabernacle and altar.  The dove was painted on the green underside of a gracefully arched canopy which was cantilevered from the wall just above the crucifix.

Of course I knew the dove represented the Holy Spirit. But the canopy made the point, not the bird. It emphasized and protected Jesus on the cross; and also in his little house, the Tabernacle. It was clear to a kid: what’s under the canopy is more worthy of attention and protection than what’s not under it. I didn’t understand until decades later that the canopy was yet another expression of Biblical-liturgical overshadowing; and that the little canopy was properly called a baldacchino.

At Mass, I’m frequently reminded of that green canopy during the Epiclesis:

Roman Missal 3rd Edition, Eucharistic Prayer II:  “Make holy, therefore, these gifts, we pray, by sending down your Spirit upon them like the dewfall, so that they may become for us the Body and Blood of our Lord, Jesus Christ.”

Roman Missal 2nd Edition, Eucharistic Prayer II: “Let your Spirit come upon these gifts to make them holy, so that they may become for us the body and blood of our Lord, Jesus Christ.” 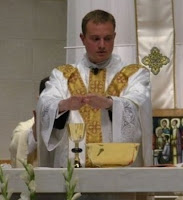 Is the priest making a little canopy over the gifts? I think it’s implicit in the gesture. More specifically, I think he’s overshadowing the gifts. I know, the prayer doesn’t say that. I’m conflating “Let your Spirit come upon these gifts…” with this bit of Luke 1: “The Holy Spirit will come upon you, and the power of the Most High will overshadow you; therefore the child to be born will be called holy, the Son of God.” But I like the overshadowing gesture; and if I had been in charge of the New Translation, that bit would be something like “Let your Spirit come upon these gifts to make them holy; and let your power overshadow them, that they may become for us the body and blood of our Lord, Jesus Christ.” But I can’t find any Mass in Latin that mentions overshadowing even once; so it’d be going beyond the Latin to include any explicit mention of it.

But Christianity is bigger than the Latin Church. And the Eastern Christians usually embrace mystery with an enthusiasm that often escapes the rational West. Are any of them explicit about overshadowing in their Divine Liturgies?

At least one is, the Ethiopian Orthodox Church. In the opening prayer of its Divine Liturgy we hear, “How awful is this day and how marvellous this hour wherein the Holy Spirit will descend from heaven and overshadow and hallow this sacrifice. In quietness and in fear, arise and pray that the peace of God be with me and with all of you.” I like that.

And at the epiclesis the priest says, “We pray thee and beseech thee Lord, that thou wouldest send the Holy Spirit and power upon this bread and upon this cup.” I think the couplet of  ‘Holy Spirit and power’ alludes to Luke 1 as well, but a bit more explicitly than Masses in the West do.

So in April of next year, when we are discussing the Epiclesis in Catechism class, I’ll make the same gesture as the priest. And then I’ll get the kids to figure out what it means, and connect it to other overshadowings they’re already familiar with. Time permitting, I’ll draw the old canopy at St. Francis and a baldacchino; and have the children tell me how they relate to the priest’s overshadowing hands.